Swiss Franc is stealing the show today as it tumbles broadly and sharply across the board. EUR/CHF is trading up 0.6% at the time of writing and is set to take on key resistance level around 1.12. The selloff in the Franc is believed to be a catch up to a combination of recent developments in the financial markets. Those include surge in risk markets including European stocks, oil and commodities. Market expectations are also firm that ECB is on course to exit stimulus down the road, or least, taper its asset purchase. Such expectation is reinforced by the rally in stocks, energy and commodities that would help lift inflation.

Also importantly, the jump in German yields since yesterday’s Ifo release added more fuel to the selloff in the Franc. German 10 year bund yield has indeed doubled since ECB President Mario Draghi’s hawkish speech. Meanwhile, Greece successfully held the first bond sales since 2014 yesterday. EUR 5b of its five-year bond was sold at yield at 4.625%, notably lower than 4.95% back in the auction in 2014. A government official was quoted saying that the sales was an "absolute success.

Talking about bonds, the Spanish/German yield spread dropped to the tightest level since 2015. Italian/German yield spread also dropped to the lowest level since December. Recent rally in Euro now encourages investors to borrow money in low-yielding assets and buy the high yield ones, such as European bonds. And that help narrowed the yield spreads with German bunds. Same picture could also be seen as investors borrow Swiss franc and sell them for Euro assets.

Technically, 1.1198 is the key to watch now and a firm break there could open up an medium term long term trend in EUR/CHF for SNB’s prior EUR/CHF floor at 1.2. Released from Swiss, UBS consumption indicator dropped to 1.38 in June. 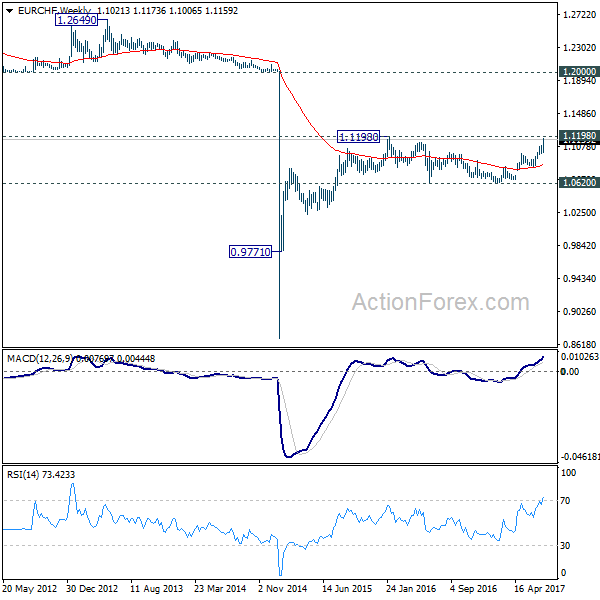 Still, FOMC rate decision and statement will be closely watched today. The Fed would leave the policy rate unchanged but the key is whether the Fed would turn more dovish on the inflation outlook which might affect the future normalization path. The market consensus remains that there would be one more rate hike in December, which was signalled in the June dot plot. However, more and more voices of doubt about the implementation due to recent disappointment on the data front. Another focus is whether the Fed would announce the kickoff period of the balance sheet reduction plan.

Released from UK, Q2 GDP grew 0.3% qoq, in line with consensus. Darren Morgan, head of national accounts at the Office for National Statistics, said that "the economy has experienced a notable slowdown in the first half of this year. While services such as retail, and film production and distribution showed some improvement in the second quarter, a weaker performance from construction and manufacturing pulled down overall growth."

Chancellor of Exchequer Philip Hammond tried to talk down the slowdown. He noted that "our economy has grown continuously for four-and-a-half years, delivering record levels of employment. We can be proud of that; but we are not complacent." Meanwhile, he emphasized the need to "focus on restoring productivity growth to deliver higher wages and living standards for people across the country. That is why we are committed to investing in infrastructure, technology and skills to deliver the best possible base for strong future growth."

Also from UK, BBA mortgage approvals dropped to 40.2k in June. Index of services rose 0.3% 3mo3m in May.

BoJ Deputy Governor Hiroshi Nakaso said that he’s still confident that inflation will reach the 2% target around fiscal 2019. And, BoJ should stick with the current stimulus program. He noted that for now, companies have been trying to "absorb higher labour costs by revising their business processes". In such a way, higher labour costs are not being passed on to consumers. However, he emphasized that "the output gap is clearly improving, so companies will become more aggressive in setting wages and prices."

Australian Dollar weakens mildly today after lower than expected inflation data. CPI rose 0.2% qoq in Q2, below consensus of 0.4% qoq. Annually, CPI slowed to 1.9% yoy, down from 2.1% yoy and missed expectation of 2.2% yoy. RBA trimmed mean CPI slowed to 1.8% yoy, down from 1.9% yoy. RBA weighted median CPI, however, rose to 1.8% yoy, up from 1.7% yoy. RBA Governor Philip Lowe said today that tightening in global central banks "has no automatic implications for monetary policy in Australia". And RBA "didn’t" and "don’t need to" move in "lockstep" with others.

RBNZ Assistant Governor John McDermott has spoken about the monetary policy outlook, with a dovish stance. He suggested that current estimates the neutral interest rate is around 3.5 % with potential output growth at 2.9% and core inflation at 1.4%. He added that the neutral rate has been slowly falling for some time, due to lower potential output growth. The impact on kiwi was rather muted. NZDUSD continued its sideways trading around a 10-month high. released from New Zealand, trade surplus widened to NZD 242m in June.

In the bigger picture, the price actions from 1.1198 are seen as a corrective move. Such correction could have completed after defending 38.2% retracement of 0.9771 to 1.1198 at 1.0653. Decisive break of 1.1198 will resume the long term rise from SNB spike low back in 2015. In such case, EUR/CHF could eventually head back to prior SNB imposed floor at 1.2000. We’ll favor this bullish case as long as 1.0830 support holds. However, rejection from 1.1198 will extend the multi-year range trading with another fall. 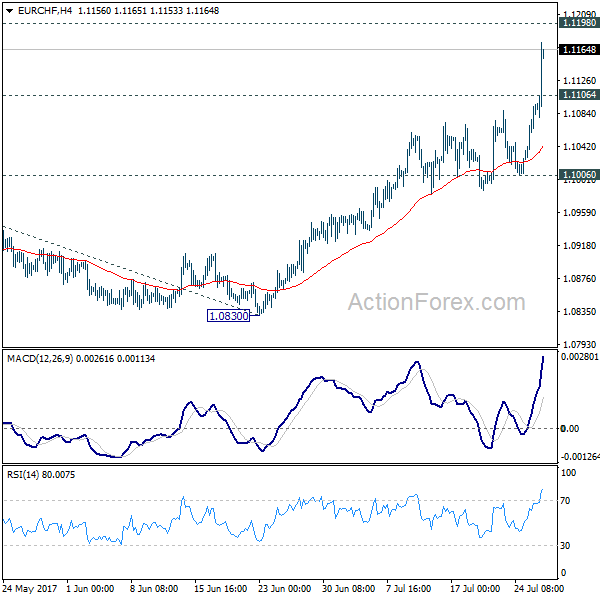 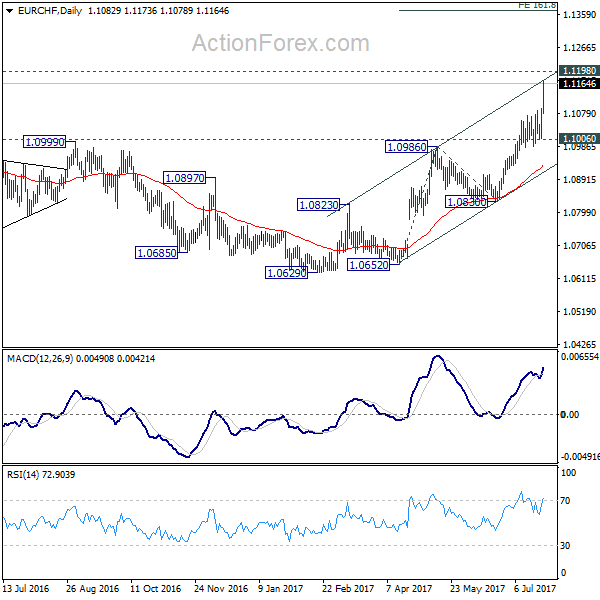