Dollar stays soft in early US session but selling momentum is limited so far. Indeed, the greenback has pared back some losses against Yen, which is the relatively stronger one. Released from US, trade deficit widened to USD -65.3b in November, larger than expectation of USD -61.5b. Exports rose 1.0% to USD 121.7b while imports rose 1.2% to USD 187.0b. Initial jobless claims dropped 10k to 265k in the week ended December 24, below expectation of 277k. Continuing claims rose 63k to 2.1m in the week ended December 17.

Eurozone M3 money supply grew 4.8% yoy in November, much higher than expectation of 4.4% yoy. Meanwhile, leading to non-financial corporations rose 2.2% yoy, highest since mid-2009. Lending to households also grew 1.9%, highest since mid-2011. Staying in Eurozone, Italy finance minister Pier Carlo Padoan criticized ECB for not giving any detail sin the decision to request the troubled Banca Monte Dei Paschi Di Siena SpA to boost the balance sheet by EUR 8.8b. And he also said that ECB’s demand didn’t take into consideration of the decree passed by the Italian cabinet for its "capability and relevance".

BoJ governor Haruhiko Kuroda said today that "both the global and Japan’s economies are moving in a positive and more desirable direction." In particular, "Japan’s exports and production are picking up, and private consumption is showing signs of strengthening". And, " the excessive strength in the yen is being corrected". Though, he also emphasized that "uncertainties remain over what policies Trump will actually pursue, how Europe’s political landscape could change given a number of upcoming elections there, or whether emerging economies and resource-based countries can continue accelerating their growth."

USD/JPY’s consolidation from 118.65 is still in progress and intraday bias stays neutral. In case of deeper fall, downside of retreat should be contained by 114.76 minor support and bring another rise. Above 118.65 will extend the current rally from 98.97 to test 125.854 high. We’d be cautious on topping at 125.85 on first attempt. 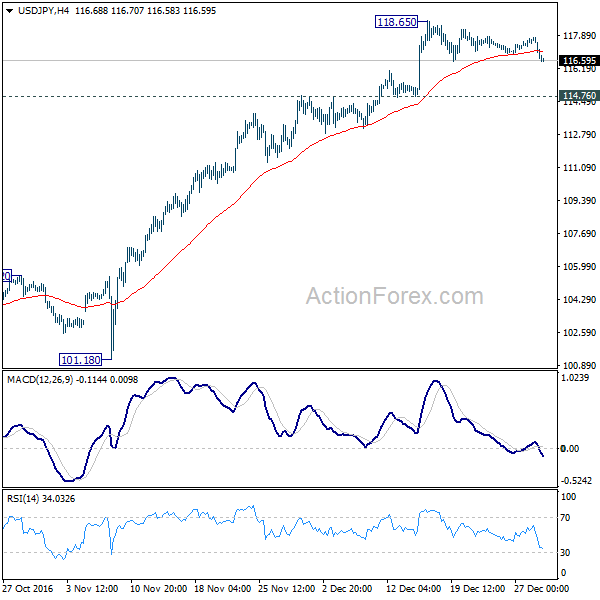 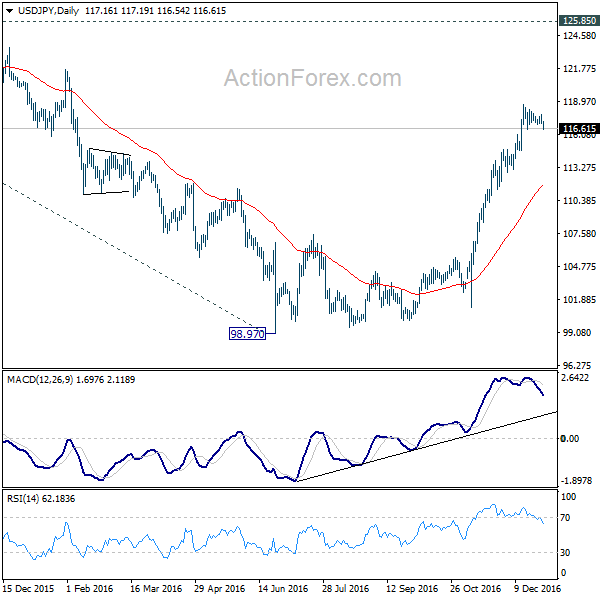