Dollar maintains overall gain in early US session in spite of weak trade data. Trade deficit widened to USD -48.5b in January versus expectation of USD -47.0b. That’s a 9.6% rise from December’s USD -44.3b and the largest figure in five years. Imports jumped 2.3% totalling USD 240.6b. Export, one the other hand, rose 0.6% to USD 192.1b. From Canada, trade surplus widened to CAD 0.81b in January. In the currency markets, Aussie remains the strongest major currency for today but momentum is unconvincing. Fresh selling is seen in Sterling as markets are starting to position for the Brexit negotiation, which should be triggered by the end of the month by prime minister Theresa May.

The Organization for Economic Cooperation and Development warned in its latest economic outlook report that protectionism could derail the world’s modest recovery. OECD chief economist Catherine Mann said that "the economic nationalism is a much bigger wildcard because we don’t know how the language translates into policy at this point." In the report, OECD noted that there were evidence of pick-up in confidence but consumption, investment, trade and productivity remain weak. More importantly, "disconnect between financial markets and fundamentals, potential market volatility, financial vulnerabilities and policy uncertainties could, however, derail the modest recovery."

In addition, "financial market expectations imply that a large divergence in short-term interest rates between the major advanced economies will open up in the coming years. This raises the risk of financial market tensions and volatility, notably in exchange rates, which could lead to wider financial instability." Also, "an increase in trade barriers in the major global trading economies – Europe, the United States and China – roughly equivalent to an average increase of tariffs to the bound tariff rates in 2001, the year when the trade negotiations under the Doha Development Round started, would have a major adverse impact on trade and GDP, particularly for those economies that imposed new trade barriers."

Ahead of ECB meeting this Thursday, German finance minister Wolfgang Schaeuble hailed that the central bank is doing a good job. He noted that the 2% inflation in February "did not surprise me" and "the development indicates that the economic recovery in Europe continues." Released from Eurozone, German factory orders dropped -7.4% mom in January, below expectation of -2.5%. Eurozone Q4 GDP was finalized at 0.4% qoq, unrevised. From Swiss, foreign currency reserves rose to CHF 668b in February. From UK, BRC retail sales monitor dropped -0.4% yoy in February.

BoJ board member Takako Masai expressed her concerns on the large swings in exchange rate. She pointed to the volatility seen back last week when Yen surged against the greenback during the first half and dropped during the second half. She noted that "there is concern that these kinds of large swings in the exchange rates, if they continue, might have a negative impact on business sentiment." Regarding inflation outlook Masai said that "although the momentum toward achieving the 2 percent price stability target has been maintained, it continues to lack firmness."

RBA left the cash rate unchanged at 1.50% as widely expected. Policymakers turned more upbeat on the economic outlook. as noted in the accompanying statement, "most measures of business and consumer confidence are at, or above, average", whilst "consumption growth was stronger towards the end of the year, although growth in household income remains low". The statement, however, added that "with growth in labour costs remaining subdued, underlying inflation is likely to stay low for some time". RBA also mentioned that the Fed is "expected to increase further" and it is less likely for other major central banks to add more monetary policy easing. More in RBA Maintains Neutral Bias In March. Fed Funds Rate Hike Alleviates Pressure On Aussie Appreciation

GBP/USD’s fall resumes by taking out 1.2213 and reaches as low as 1.2181 so far. Intraday bias remains is back on the downside for retesting 1.1946/86 support zone. As noted before, consolidation pattern from 1.1946 should have completed with three waves to 1.2705 already. Break of 1.1946 will confirm our bearish view and resume the larger down trend. On the upside, break of 1.2346 support turned resistance is needed to invalidate this view. Otherwise, outlook will remain cautiously bearish in case of recovery. 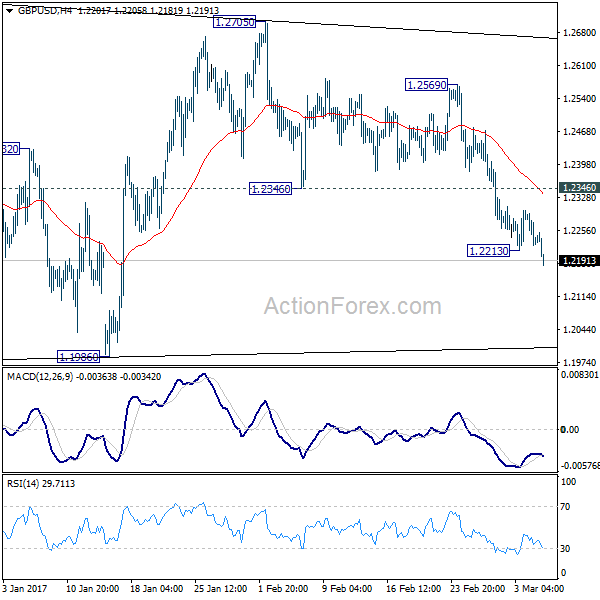 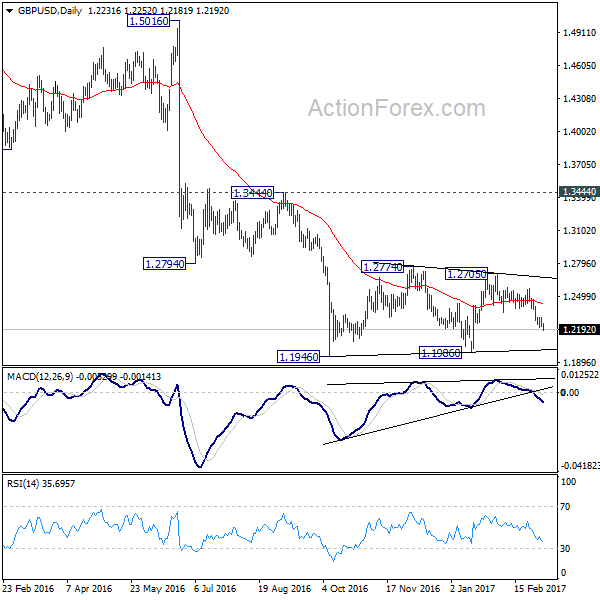