Happy New Year to our readers!

Aussie and Kiwi open the year mildly higher as lifted by China data. The Caixin PMI manufacturing for China rose to 51.9 in December, much better than expectation of being unchanged at 50.9. That’s the best reading in three years since January 2013. Caixin noted that "a further rise in production at Chinese manufacturers supported the higher PMI reading in December. Notably, the rate of output growth accelerated to a 71-month high, with a number of panelists commenting on stronger underlying demand and new client wins." And, "data indicated that improved domestic demand was the key driver of new business growth, however, as new export sales were unchanged in December." Nonetheless, released earlier in the week, the official PMI manufacturing dropped to 51.4, down from 51.7 and below expectation of 51.6. Technically, AUD/USD just defended 0.7158 temporary low and more sideway trading would be seen above this level in near term.

Canadian Dollar is also firm today as WTI crude oil attempts to break recent resistance at 54.51. Nonetheless, WTI is losing some momentum after hitting 54.2. Strong rally in oil price was seen last year since November, driven by announcements of production cut by OPEC and non-OPEC producers. OPEC decided to cut its crude production by 1.2 million barrels, effective January, 2017, while non-OPEC producers, including Russia but not the US, would reduce output by around 0.6M bpd. While execution of OPEC/non-OPEC cuts remains highly uncertain, the Paris-based International Energy Agency (IEA) forecasts global oil surplus would start disappear in 1H17. The agency suggested that "OPEC, Russia, and other producers are looking to speed up the process" of rebalancing this year, adding that "the market is likely to move into deficit in the first half of 2017 by an estimated 600K barrels a day" if all the parties comply to the agreement.

Meanwhile, whether the post election strength in Dollar could sustain depends on incoming data as well as Donald Trump’s policies. Currently, markets are pricing around 64% chance of another rate hike by Fed by June. FOMC members projected three rate hikes this year as seen in latest projections. However rally in Dollar, yields and stocks lost steam just before end of 2016. The string of data to be released this week will be closely watched, starting from ISM manufacturing index today, ISM services on Tuesday and non-farm payroll on Friday. FOMC minutes to be released tomorrow will also catch much attention.

AUD/USD recovered ahead of 0.7158 temporary low and intraday bias stays neutral. More consolidations would be seen. In case of another recovery, upside should be limited by 0.7310 support turned resistance and bring fall resumption. As noted before, the whole corrective pattern from 0.6826 bottom should have finished. Break of 0.7144 support will likely extend the larger down trend through 0.6826. 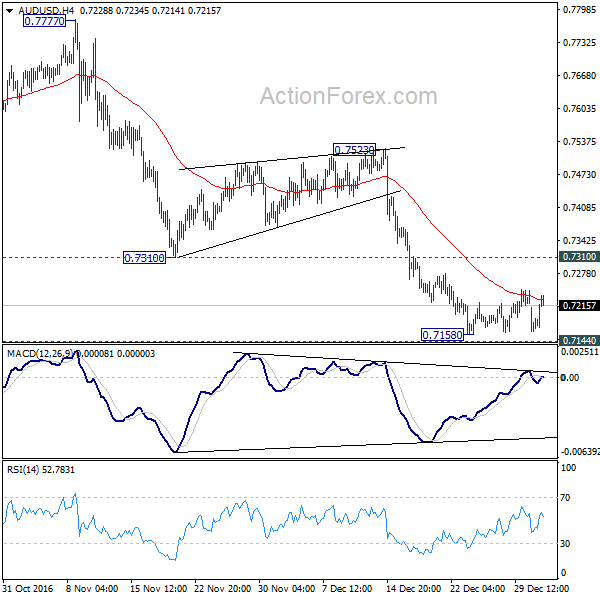 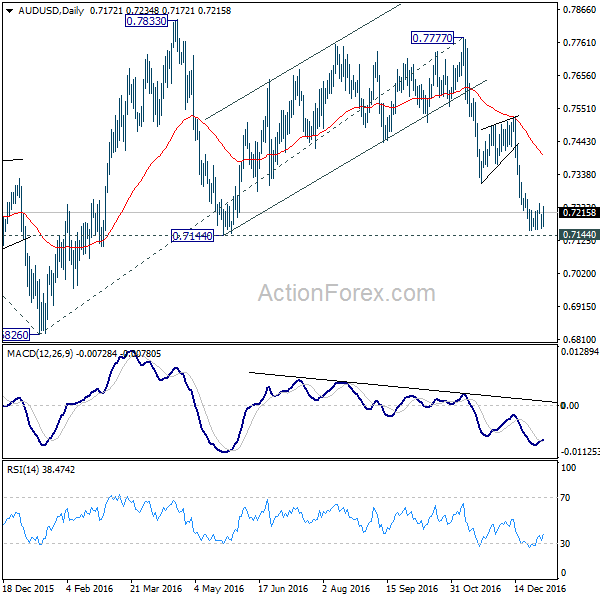