Dollar jumps sharply in early US session on much stronger than expected job data. ADP report showed that private payroll grew by 298k in January, comparing to consensus of 184k. Prior month’s figure was also revised up from 246k to 261k. The data affirmed general expectation of a solid non-farm payroll report to be delivered this Friday. And that would solidify the case for Fed to deliver the highly anticipated rate hike next week. Also released in US session, Q4 non-farm productivity was finalized at 1.3% while unit labor costs at 1.7%. From Canada, housing starts rose 1k to 210k in February. Building permits rose 5.4% mom. Labor productivity rose 0.4% qoq in Q4.

Technically, USD/CAD led the way by taking out 1.3436 resistance to resume recent rise. AUD/USD also breaches 0.7542 temporary low. GBP/US is extending recent fall to as low as 1.2158 so far. While Dollar could be building up momentum again, EUR/USD is holding well above 1.0493 support. USD/JPY is held well below 114.94 resistance. Outlook in Dollar is only cautiously bullish until the mentioned levels in EUR/USD and USD/JPY are broken firmly.

UK Chancellor of Exchequer Philip Hammond delivers his first full budget statement today. And he emphasized that there was "no room for complacency" in spite of the improvement of the economy since the Brexit referendum. And he promised to give UK a "strong and stable platform" for Brexit negotiations. Growth forecast for 2017 was revised up from 1.4% to 2.0%. 2018 growth will slow to 1.6%. However, public borrowing will be lowered by GBP -16.8b. Deficit is projected to be 2.6% of GDP in 2016/17 fiscal year.

Sterling is under selling pressure since yesterday as market perceive prime minister Theresa May as suffering another setback in her Brexit plan and implementation. The House of Lords in US passed an amended bill on Brexit after having the highest turnout since 1831. The vote was passed by 366 to 268 to add addition condition to the so called "European Union (Notification of Withdrawal) Bill". That demands a guarantee of "meaningful vote" by the Parliament on the outcome of Brexit talks. And it’s seen by analysts as securing veto on any final agreements. The bill will now return to the House of Commons for deciding whether to accept the Lord’s amendments. The debate could probably held on next Monday. The UK Brexit Secretary David Davis criticized that "it is clear that some in the Lords would seek to frustrate that process".

Euro quiet ahead of tomorrow’s ECB

Euro trades mixed today as markets quietly await ECB rate decision and press conference tomorrow. While political development was the main drive in price actions recently, ECB will still be a force in trigger volatility. Headline jumped to 2% in February, hitting ECB’s target. However, underlying inflation pressure remained subdued. There is practically no chance for ECB to change its monetary policies yet. The key to watch is any updates on the central bank’s economic projection. ECB could raise 2017 inflation forecast from 1.3%. But the 1.5% projection for 2018 and 1.7% projection for 2019 might not be changed. The 2018 and 2019 inflation forecasts would be the ones that drive Euro’s movement.

China surprisingly recorded trade deficit, of RMB 60B, in February. The market had anticipated a decline of surplus to RMB 173B from RMB 355B in January. Imports soared 44.7% yoy while exports gained 4.2% yoy, compared with growth of 15.9% and 25.2%, respectively, in January. The sharp rise in imports might indicate improvement in domestic demand. China’s FX reserve added USD 6.9B to USD 3.01 trillion in February, marking the first increase in 8 months. The market had anticipated further decline for the month. After adjusting for currency valuation effects, the reserves probably increased USD 19-25B in the month. While this might be the first sign of the effect of China’s capital control measures, we expect the government remain cautious as outflow should remain a problem for the rest of year. Note that a reason for the uptick in February was the improved performance of renminbi at the beginning of the year.

Further information, including PBOC’s FX position and SAFE flow data, is needed to grasp a clearer outlook of the capital flow situation. We remains bearish over renminbi as the Fed’s monetary policy normalization program should continue to support USDCNY. More in February Trade And Reserve Data Encouraging, China’s Policy Focus Shifts to ‘Risk Prevention’ from ‘Pro-Growth’ in 2017.

The Japanese yen strengthens today, in particular against European majors, as Nikkei continues its slump. Q4 GDP growth was finalized at 0.3% qoq, revised up from 0.2% qoq but missed expectation of 0.4% qoq. GDP deflator was finalized at -0.1% qoq, unrevised. Current account surplus narrowed to JPY 1.26T in January, below expectation of JPY 1.46T. Bank lending grew 2.8% yoy in February. Eco watchers sentiment dropped to 48.6 in February. Leading indicator rose to 105.5 in January.

USD/CAD’s break of 1.3436 temporary top indicates resumption of whole rebound from 1.2968. Intraday bias is back on the upside for retesting 1.3598 high. Decisive break there will resume the medium term rally from 1.2460 and target next fibonacci level at 1.3838. On the downside, however, break of 1.3371 minor support will turn intraday bias neutral first. And that could also be an early sign of short term topping, possibly with bearish divergence condition in 4 hour MACD. 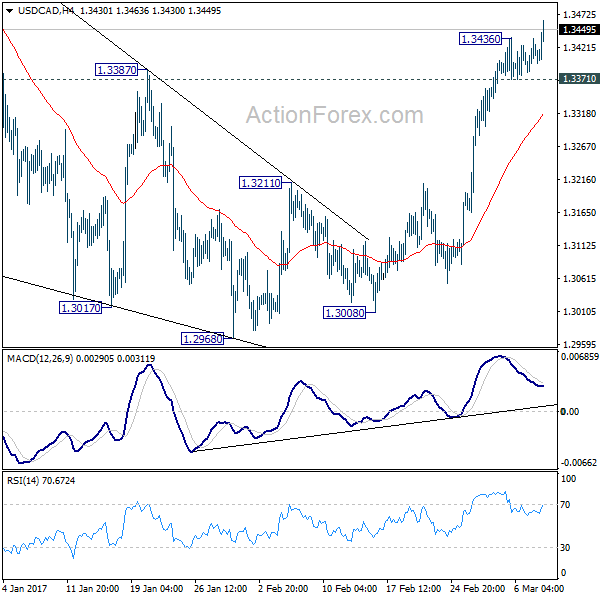 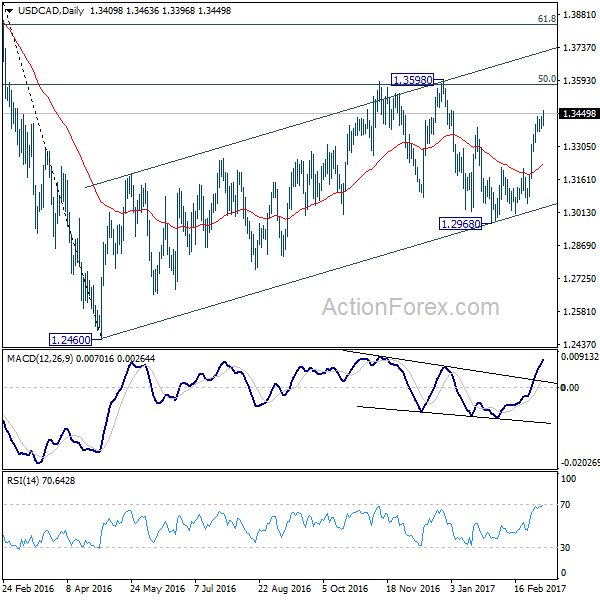