Euro trades mixed as markets await ECB rate decision and press conference. The common currency trades in red against Dollar but weakness is limited so far. EUR/USD is bounded in range of 1.0493/0630 without a clear near term direction yet. ECB is widely expected to keep policies unchanged even though headline inflation finally hit the 2% target for the first time since 2013. Political uncertainties in Eurozone will keep policymakers’ hands tight. And the uncertainties include elections in France, the Netherlands and Germany. Also, the deal with UK on Brexit is basically unknown at this point.

Nonetheless, there are still a few points to note at president Mario Draghi’s press conference. In particular, ECB will release new staff projections for inflation and growth. Back in December, ECB projected inflation to hit 1.3% in 2017, 1.5% in 2018 and 1.7% in 2019. GDP is projected to be 1.7% in 2017, 1.6% in 2018 and 1.6% in 2019. Inflation forecast for 2017 will most likely be revised up and some economists that ECB could now estimate 1.6%. The key is the revision for 2018 and 2019 which would shape the policy path ahead, after passing most political uncertainties. Euro could react positively if the new projections paint a more confident picture on inflation outlook.

The government would borrow GBP 51.7b this year, GBP 16.4b lower than forecast. For 2017-18, borrowing will rise to GBP 58.3b and then drop to GBP 40.6b in 2018/19. Regarding Brexit, Hammond said that "As we start our negotiations to exit the European Union, this budget takes forward our plan to prepare Britain for a brighter future; it provides a strong and stable platform for those negotiations." Sterling’s reaction to the budget was muted.

In US, expectations for a rate hike by Fed next week continued to build up, and was solidified further after yesterday’s strong ADP employment data. Fed fund futures are pricing in 90.8% chance of a March hike. Such expectations provided a list to Dollar and yields while stocks extended their retreat.

10 year yield opened at 2.567 hit as high as 2.583 over night before closing at 2.552. The break of near term trend line resistance is seen as a sign of momentum. However, the close below open after a strong intraday surge indicates some hesitation in the markets. We maintain our view that price actions from 2.621 are a consolidation pattern. Strong break of 2.621 is needed to confirm resumption of up trend from 1.336. Otherwise, the consolidation could extend.

Breach of 1.4014 temporary top suggests that pull back has completed at 1.3874, ahead of 1.3835 support. Intraday bias in EUR/AUD is turned back to the upside for 1.4289 resistance next. Current development, with a short term bottom formed at 1.3624, is taking as an early sign of larger trend reversal after defending 1.3671 key support. Break of 1.4289 will confirm this case and target 1.4721 resistance next. However, break of 1.3874 minor support will dampen our bullish view and turn bias back to the downside for 1.3624 instead.

In the bigger picture, price actions from 1.6587 medium term top are viewed as a corrective pattern. We’d expect strong support from 1.3671 key level to contain downside and bring rebound. Up trend from 1.1602 should not be finished and will resume later. Break of 1.4721 resistance will indicate completion of such correction and turn outlook bullish for retesting 1.6587 high. However, sustained break of 1.3671 will invalidate our bullish view and would turn focus back to 1.1602 long term bottom. 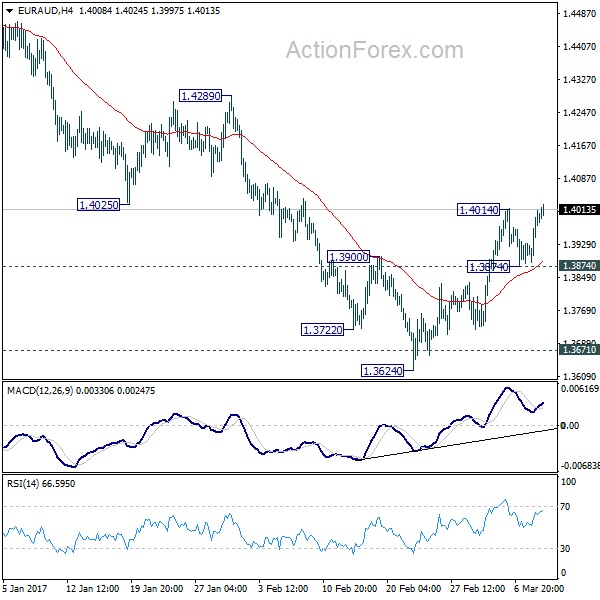 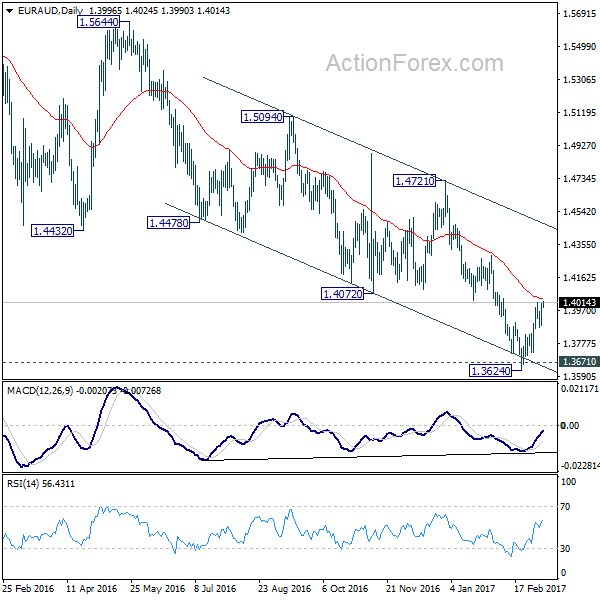