The Japanese stages a strong rally today, possibly in response to US President Donald Trump’s comments about shutting the the government. Strength in Yen is particularly apparent against New Zealand as NZD/JPY dives through recent support at 79.07. USD/JPY is being rejected from 4 hour 55 EMA and is possibly now heading back to 108.59. But at same time, Euro also surges broadly after solid PMI data that suggests growth momentum to continue. EUR/GBP extends recent rally through 0.92 handle. EUR/USD is at this point, staying is recently established range but looks set to retest 1.1846 minor resistance again. It looks like the forex traders are getting a bit impatient waiting for Jackson Hole symposium.

While there were revived hope of tax reform by US President Donald Trump’s administration, Dollar seemed to have struggle to gain momentum due to Trump’s comments. To be more particular, Trump said yesterday that "if we have to close down our government, we’re building that wall." If the Congress does not reach a funding deal by September 30, the US government will shut down. At the same time, even if Republicans and Democrats could agree on a deal that exclude the US-Mexico border wall, Trump can, in theory, veto it. And the government will still shut down. Secondly, Trump said that he didn’t think there would be a deal in the renegotiation of the North American Free Trade Agreement with Mexico and Canada. And Trump said that "we’ll end up probably terminating NAFTA at some point:.

Eurozone PMI: Best growth spell for a number of years

Markit noted that "this is another positive set of numbers for the euro area, which continues to enjoy its best growth spell for a number of years." And strength in factory orders "bodes well for the labor market as firms will likely look to hire extra staff to deal with outstanding work."

Ahead of Jackson hole symposium in US, ECB President Mario Draghi delivered a speech in Lindau, Germany. Draghi defended quantitative easing program. He noted that "a large body of empirical research has substantiated the success of these policies in supporting the economy and inflation, both in the euro area and in the United States." And, "policy actions undertaken in the last 10 years in monetary policy and in regulation and supervision have made the world more resilient."

UK May softens stance on European Court of Justice

In UK, it’s reported that Prime Minister Theresa May is softening her stance on EU Court in Brexit negotiation in hope of speeding up the process to trade agreements. May was clear with her stance that UK could "take back control of our laws and bring an end to the jurisdiction". But now, May said that UK will avoid European Court of Justice’s "direct jurisdiction". That is seen as a compromise for ECJ to have some say in governing and any post Brexit dispute. And of course, there could still be some influence from ECJ on UK laws.

Japan economy supported by a mixed of strengthened demand

Japan PMI manufacturing rose to 52.8 in August, up from 52.1 and beat expectation of 52.3. That’s also the highest level in six months. Markit noted that expansion in the Japanese economy "continues to be supported by a mix of strengthened demand from both domestic and external sources: public work projects and stronger sales to South East Asia were both reported by panellists as areas of growth in August."

NZD/JPY’s break of 79.07 support confirms resumption of decline from 83.90. 61.8% retracement of 75.65 to 83.90 is taken out already. Intraday bias is now on the downside for 75.65 key support level next. As this point, it’s slightly more likely that price actions fro 83.767 are forming a sideway pattern. Hence, we’ll start to look for bottoming signal above 75.65. But break of 80.59 resistance is needed to indicate short term reversal. Otherwise, near term outlook will stay mildly bearish in case of recovery. 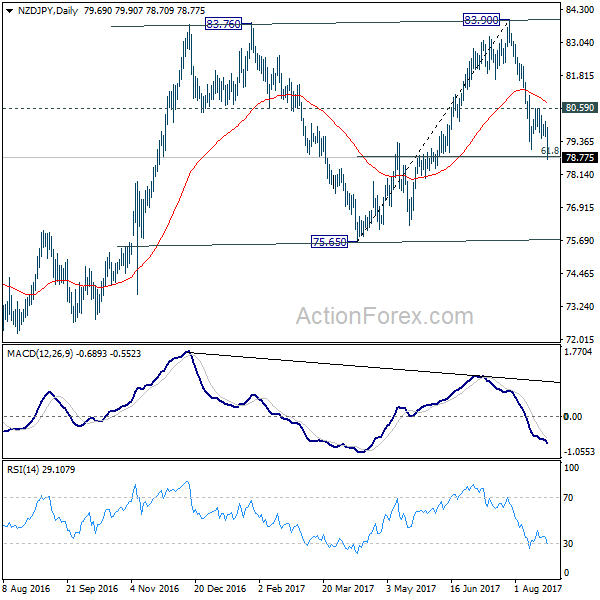 EUR/GBP’s rally continues today and reaches as high as 0.9217 so far. Break of channel resistance suggests upside acceleration. Intraday bias remains on the upside for 0.9304 key resistance next. At this point, there is no clear sign of up trend resumption yet. Hence, we’ll be cautious on strong resistance from 0.9304 to limit upside and bring another fall. But firm break of 0.9304 will confirm up trend resumption and pave the way to 0.9799. On the downside, below 0.9159 minor support will turn intraday bias neutral first. 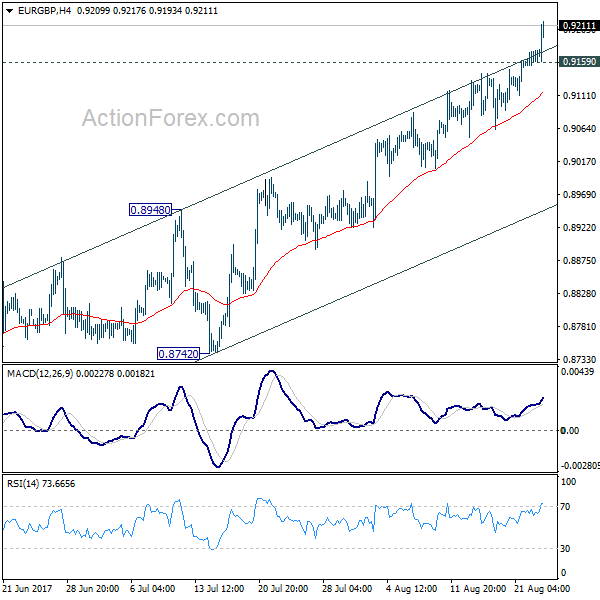 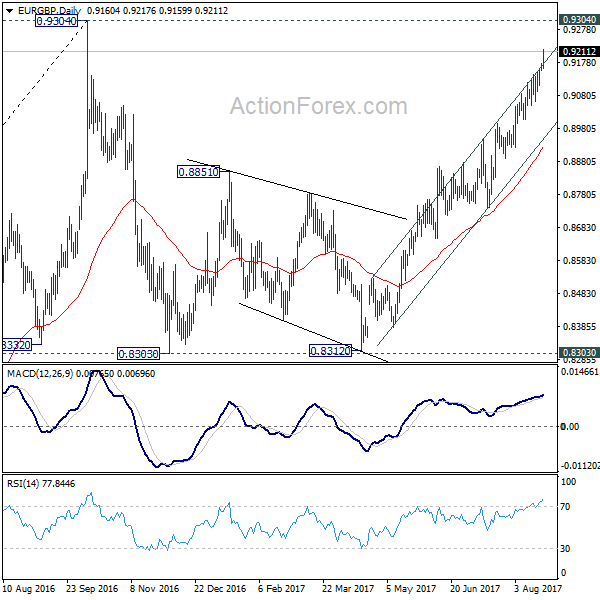