Swiss Franc drops sharply today, as pressured by selling against Euro, and rising treasury yields. Dollar once again tries to recover, but there is no committed buying yet. The greenback traders will carefully scrutinize the comments from Fed officials coming out today and tomorrow, as the annual Jackson Hole Symposium goes along. Meanwhile, commodity currencies will look into stocks’ reaction and overall market sentiment.

Technically, EUR/CHF’s strong rebound today raises the possibility that 1.0694 is already a short term bottom. Focus is now turning to 1.0839 resistance. Break there will bring stronger rally back towards 1.0985 resistance. If that happens, we’ll see if EUR/USD would follow and break through 1.1804 resistance. Or, USD/CHF would break through 0.9241 resistance instead. 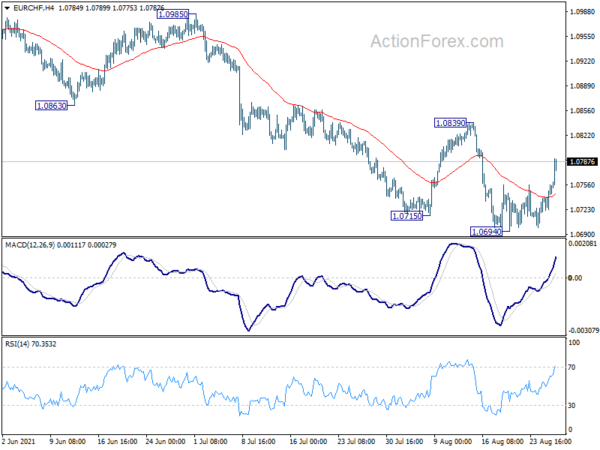 Kansas City Fed President Esther George told Bloomberg that the spike in Covid is a “risk to the outlook”, but her contacts in the region said the economy “continues to grow at a strong rate”, consumers are “still spending” and labor markets is “continuing to heal”. The outlook “remains a positive one”. The virus is not expected to derail the economy”.

George also maintained that the progress the economy has made suggests “we’ve come to a point where we can begin to ease up on the amount of accommodation”. It’s “time to begin to make those adjustments” on asset purchases.

As policymakers are coming into the September meeting, she said, we will continue to talk about how the economy has unfolded and the timing for adjustments to those asset purchases”.

US initial jobless claims rose to 353k, slightly below expectation

US GDP grew 6.6% annualized in Q2, revised slightly up

According to the second estimate, US GDP grew an annual rate of 6.6% in Q2, revised up from 6.5%. The update reflects upward revisions to nonresidential fixed investment and exports that were partly offset by downward revisions to private inventory investment, residential fixed investment, and state and local government spending. Imports, which are a subtraction in the calculation of GDP, were revised down.

In the accounts of July 21-22 meeting, ECB said a “large majority” of the council members supported the forward guidance proposal, which was “widely seen as providing a fine balance between greater emphasis on outcome-based elements in the forward guidance and a more flexible, forward-looking perspective.”

However, “a few members upheld their reservations, as the amended formulation did not sufficiently address their concerns.”. This related in particular to the “implied likelihood and persistence of overshooting, and being seen as promising to keep interest rates at their present or lower levels for a very long time period without an explicit escape clause.”

ECB also said, the new forward guidance “underscored the Governing Council’s commitment to achieving its new inflation target”. It indicated that ECB would “wait until it was confident about the path of inflation before raising the key policy rates.” Nevertheless, the guidance is “not a rule” but “an indication to financial markets and the broader public” for aligning their inflation expectations.

Rolf Bürkl, a GfK consumer expert, commented on this observation: “Significant higher incidence values, a slowdown in vaccination momentum, and discussions about how to deal with unvaccinated individuals in the future have caused noticeable uncertainty among consumers in Germany. They fear that restrictions could even be tightened again. This is obviously depressing consumer sentiment right now.”

Japan corporate services price index rose 1.1% yoy in July, below expectation of 1.3% yoy. The increase was driven by 1.4% rise in transportation fees, and in particular, with international freight costs up 24.6%. Meanwhile, hotel service fees rose 10.8%, highest in six years, reflecting the impact of the Tokyo Olympics.

“The recent increase in infections will weigh on services producer prices, though we could see service demand perk up if progress in vaccinations help re-open the economy,” said Shigeru Shimizu, head of the BoJ’s price statistics division.

Bank of Korea raised interest rate by 0.25% to 0.75% today, becoming the first major Asian economy to hike. “The Board will gradually adjust the degree of monetary policy accommodation as the Korean economy is expected to continue its sound growth and inflation to run above 2% for some time, despite ongoing uncertainties over the virus,” the BOK said in its monetary policy statement.

Governor Lee Ju-yeol said, “we’ve decided to put the focus on reducing financial imbalances, and as we raise the rate, we are embarking on a process of normalizing policy in line with economic recovery.”

BoK maintained its forecast of 4% GDP growth this year. Consumer inflation forecast was, however, upgraded from 1.8% to 2.1%. 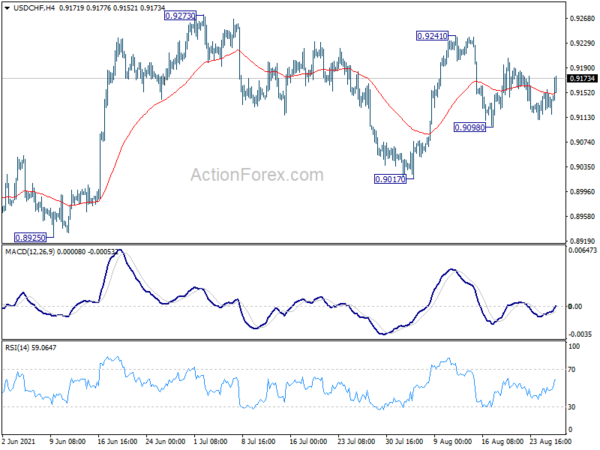 In the bigger picture, the failure to sustain above 55 week EMA (now at 0.9180) retains medium term bearishness in USD/CHF. Break of 0.8925 support should resume the whole decline form 1.0342 (2016 high) through 0.8756 low. However, break of 0.9273 resistance and sustained trading above 55 week EMA will be an early sign of bullish trend reversal. Focus will then turn to 0.9471 resistance for confirmation. 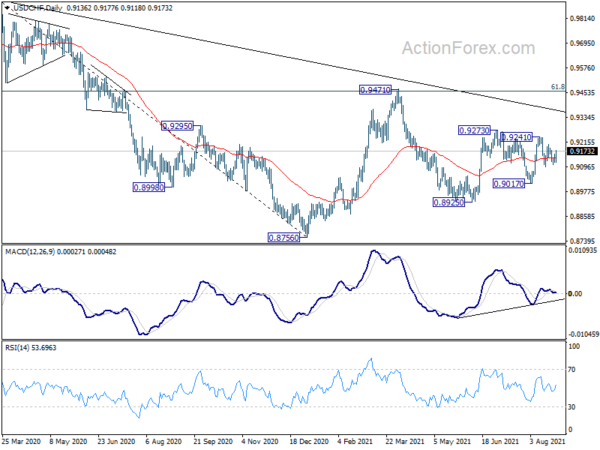