Sterling tumbles broadly today on increasing talks of energy shortages due to a post-Brexit shortage of truck drivers, as well as a halt to license testing during pandemic lockdowns. Mild risk aversion, which start in European markets, is also weighing down some commodity currencies. Nevertheless, there is little lift to Yen overall, which stays weak against most. Surge US treasury yields is boosting Dollar while German yield is also supporting Euro.

Technically, GBP/USD’s break of 1.3570 support indicates resumption of fall from 1.4248 to 1.3482 key structural support. Break will confirm that it’s in a medium term correction that should at least target 1.3163 fibonacci level. At this same time, 111.65/71 resistance zone in USD/JPY is now an immediate focus. Sustained break there will be a signal of long term bullish reversal. 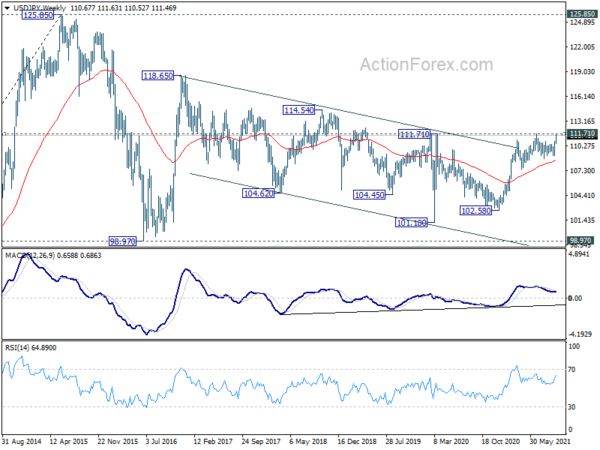 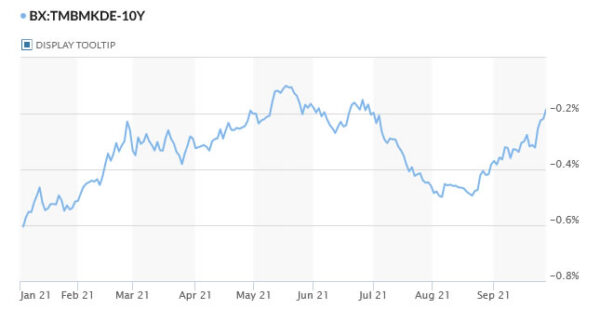 St. Louis Fed President James Bullard said he expects inflation to remain above 2.8% through next year. It’s going to “stay above target over the forecast horizon”, and there is “now a risk we are going to overachieve and be too high for too long”.

In his outlook, interest rates should be raised twice next year, reflecting faster and more persistent inflation than foreseen. It may all work out “and we will converge into bliss at the steady state where inflation is at 2% and we never change the funds rate again,” he said. “That is the current scenario…We all know reality will probably be something messier.”

“It could easily be the case that inflation could fall back to target and it will be all beautiful the way we have described it,” he added. “Inflation could also be a lot more persistent than we had hoped and in that case we will have to recalibrate how we are going to keep inflation under control.”

US goods trade deficit widened to USD 87.6B in Aug

ECB Lagarde: Key challenge is not to overreact to transitory supply shocks

In a speech, ECB President Christine Lagarde said, “the key challenge is to ensure that we do not overreact to transitory supply shocks that have no bearing on the medium term, while also nurturing the positive demand forces that could durably lift inflation towards our 2% inflation target.”

And, “once the pandemic emergency comes to an end – which is drawing closer – our forward guidance on rates as well as purchases under the asset purchase programme will ensure that monetary policy remains supportive of the timely attainment of our medium-term 2% target.”

Germany Gfk consumer confidence rose to 0.3, too early for talk of a fundamental trend shift

“At the time of the survey, the incidence increase had noticeably slowed and currently, values are even declining slightly. As a result, consumers are more optimistic that the fourth wave will be less pronounced than many feared. That is why many consumers can once again see scope for restrictions to be eased further” explains Rolf Bürkl, GfK consumer expert.

“Even if the consumer sentiment has almost reached its pre-crisis level, it is still too early for talk of a fundamental trend shift. Instead, we must first see how the infection situation develops in the winter months and if new restrictions become necessary.”

In the minutes of BoJ’s July meeting, a few members said “the timing of a full-fledged recovery in Japan’s economy was likely to be somewhat delayed” comparing with the expectations in April.

Many members warned of the high uncertainty on overseas outlook. In particular, one member noted the deceleration in China’s economy “should be born in mind.” Also, one member warned, “if the rise in U.S. long-term interest rates accelerated, we must be vigilant to the risk of capital outflows from emerging economies.”

Ben James, Director of Quarterly Economy Wide Surveys, said: “Retail turnover continues to be negatively impacted by lockdown restrictions, with each of the eastern mainland states experiencing falls in line with their respective level of restrictions. In direct contrast, states with no lockdowns performed well with Western Australia and South Australia enjoying strong rises as physical stores were open for trade.”

GBP/USD’s break of 1.3570 support indicates resumption of fall from 1.4248. Intraday bias is back on the downside for 1.3482 resistance turned support next. Sustained break there will target 1.3163 fibonacci level. On the upside, though, above 1.3608 support turned resistance will turn intraday bias neutral first. But risk will stay on the downside as long as 1.3748 resistance holds. 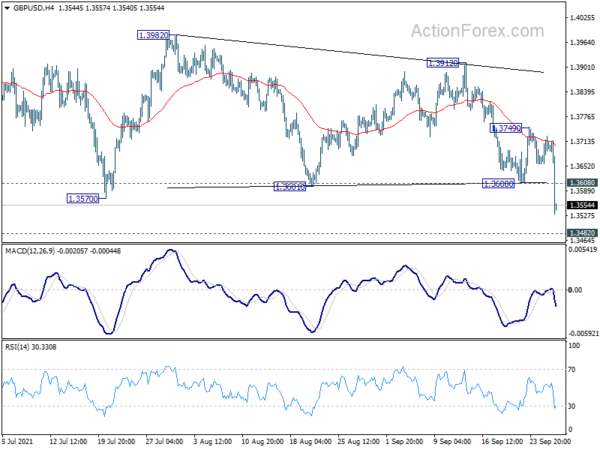 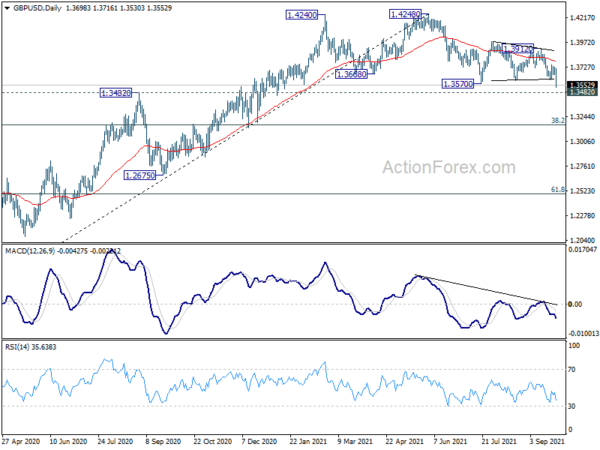