Euro recovers mildly in Asian session today but stays in red for the week except versus Dollar. Markets are cautiously awaiting the highly anticipated ECB policy decision and press conference. There were rumors flying around since last week that ECB will deliver nothing this time. The decision on tapering the asset purchase program would be delayed to October or even December. At this point, October is still a more likely option. After all, the central bank will likely maintain the rhetoric that "the net asset purchases, at the current monthly pace of EUR 60b, are intended to run until the end of December 2017, or beyond, if necessary, and in any case until the Governing Council sees a sustained adjustment in the path of inflation consistent with its inflation aim". Policymakers would also warn of currency appreciation. At the Q&A session, Draghi would probably stay neutral in the tapering schedule.

Canadian Dollar remains the strongest one for the week after BoC’s surprised rate hike. BoC increased the policy rate by 25 bps to 1.00%, following a rate hike in July. Policymakers cited the better-than-expected economic developments as a key reason for the removal of stimuli from the market. However, they remained cautious over a number of issues including excess capacity, subdued inflation, geopolitical risks and the strength in Canadian dollar. On the future tightening path, the central bank stressed that it is "not predetermined" and "will be guided by incoming economic data and financial market developments as they inform the outlook for inflation". We believe the progress of NAFTA renegotiations and other trade-related issues, the inflation outlook, the housing market developments and the Fed’s balance sheet reduction would be key factors driving BoC’s rate decision. More in BOC Surprisingly Hikes Rate For Second Consecutive Meeting.

Dollar, on the other hand, is trading as the weakest one for the week. US President Donald Trump reached a short-term deal with Democrats, despite opposition from Republicans, to extend the US debt limit, providing government funding for three months until December 15. The deal would also provide financial relief to victims of Hurricane Harvey. However, the decision attracted criticism that Trump is further distancing himself from his own party, the Republicans. And some pointed out it’s an act to deflect blame for the gridlock for a year. The move overruled Trump’s own treasury secretary, Steven Mnuchin, who’s in the middle of a proposal for long term fix to the debt ceiling problem. Also, shortly before the meeting, Republican House Speaker Paul Ryan called the Democratic proposal a "ridiculous and disgraceful" idea that would "play politics with the debt ceiling". The bill is due to pass in the Republican-controlled Congress and Senate.

Fed’s Beige Book economic report showed modest moderate growth across the regions in the past two months. Labor markets were "widely characterized as tight" but "growth slowed some on balance". But the report also showed that "contacts in many districts expressed concerns about a prolonged slowdown in the auto industry." Wage growth also remained subdued as " majority of districts reported limited wage pressures and modest to moderate wage growth." Regarding inflation, "prices rose modestly overall across the country".

Fed Vice Chair Stanley Fischer announced to step down from his position for personal reasons, on or around October 13. That is eight months ahead of the end of his term. Fischer noted in his letter to Trump that job growth has returned and "steps to make the financial system stronger and more resilient" had been taken. Fischer is seen as a close ally of Chair Janet Yellen. And, his departure intensify rumors that Yellen will also leave after her term expires next February. Trump’s top economic advisor Gary Cohn has always been tipped as the replacement for Yellen. But the Wall Street Journal reported yesterday, citing sources, that Cohn won’t be picked. Relationship between Cohn and Trump turned sour after the former criticized the latter’s reactions to white supremacist rally in Virginia last month.

Talking about top central bankers, BoJ Governor Haruhiko Kuroda will also end his five year term next March. There have been some criticism on Kuroda for being out of ideas in boosting inflation in Japan. Prime Minister Shinzo Abe’s top advisor Nobuyuki Nakahara warned before that Kuroda will "fall into inertia" after being in the job for so long. But according to a Bloomberg survey of economist done between August 21 and 25, Kuroda is still the front runner for the job by a market. Respondents assigned a score of 68 out of 100 for Kuroda. The next is Deputy Governor Hiroshi Nakaso at 34/100, and then Columbia University Professor Takatoshi Ito at 30/100.

Australia retail sales rose 0.0% mom in July, below expectation of 0.2% mom. Trade surplus narrowed to AUD 0.46b in July. German industrial production and Swiss foreign currency reserves will be featured in European session. But the main focus will certainly be on ECB announcement and press conference. Later in the day, Canada will release building permits and Ivey PMI. US will release jobless claims and non-farm productivity.

Intraday bias in EUR/GBP remains on the downside for the moment. Current fall from 0.9305 short term top would target 55 day EMA (now at 0.9013). Sustained trading below there will likely start the third leg of the consolidation from 0.9304 and target 0.8303 key support again. On the upside, above 0.9236 minor resistance will turn bias back to the upside for 0.9225 minor resistance instead. 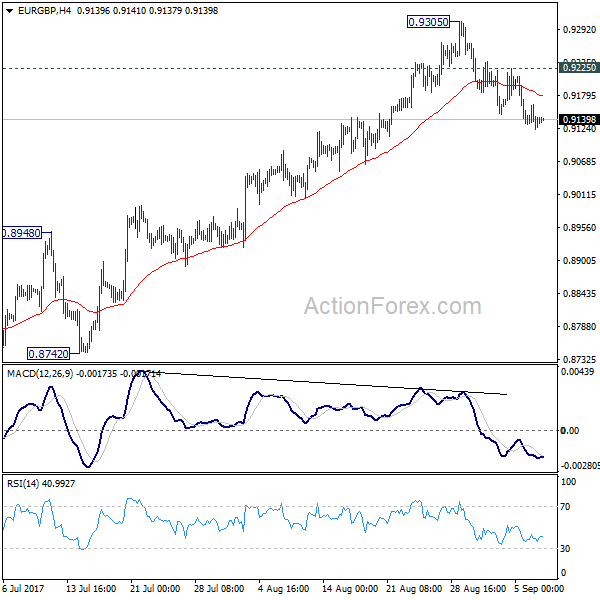 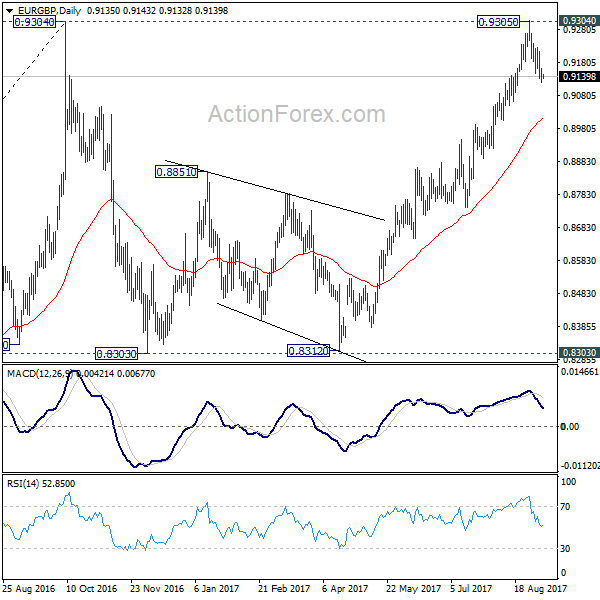