Dollar’s selloff accelerates today as markets are concerned of any more geopolitical risks during the week end. It will be North Korea’s Foundation Day on Saturday and Pyongyang might just launch another missile to celebrate. At the same time, another hurricane Irma will likely make landfall in Florida late Saturday of early Sunday. In the background, the surprised early resignation of Fed Vice Chair Stanley Fischer created even more uncertainty in Fed as Janet Yellen’s future as Fed Chair is unknown. Euro, despite being lifted against Dollar after ECB, could follow as the second weakest for the week.

Meanwhile, Canadian Dollar is set to end as the biggest winner of the week, as boosted by BoC rate hike as solid job data. The Canadian job market grew 22.2k in August, above expectation of 15.0k. Unemployment rate dropped to 6.2%, below expectation of 6.3%. That matched recent low back in October 2008. Capacity utilization rose to 85.0% in Q2.

China’s trade surplus narrowed to USD 42.0b in August, from USD 46.7B and missed expectation of USD 48.6b. Imports grew 13.3% yoy, well above expectation of 10.0% yoy. Imports also maintained July’s pace at 11.0% yoy. However, exports softened and grew only 5.5%, below expectation of 6.0% yoy and notably slower than July’s 7.2% yoy. China’s foreign current reserves rose for a seven straight month in August. Reserves jumped USD 10.81b to USD 3.092T. But the number was well below economists expectation of USD 19b.

GBP/USD rises further to as high as 1.3223 so far and intraday bias remains on the upside for 1.3267 resistance. Break there will extend larger rally from 1.1946 to 1.3444 key resistance level next. Price actions from 1.1946 are still seen as a corrective pattern. Hence, we’d expect strong resistance from 1.3444 to limit upside to bring larger down trend reversal eventually. On the downside, below 1.3114 minor support will turn intraday bias neutral first.

In the bigger picture, overall, price actions from 1.1946 medium term low are seen as a corrective pattern. While further rise cannot be ruled out, larger outlook remains bearish as long as 1.3444 key resistance holds. Down trend from 1.7190 (2014 high) is expected to resume later after the correction completes. And break of 1.2588 will indicate that such down trend is resuming. 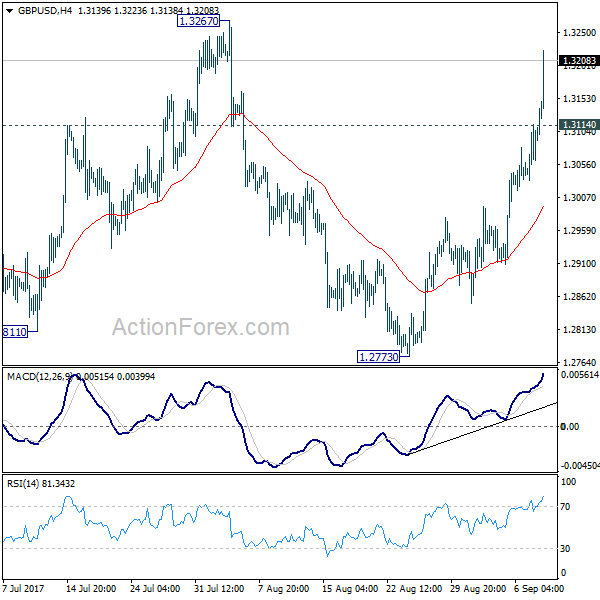 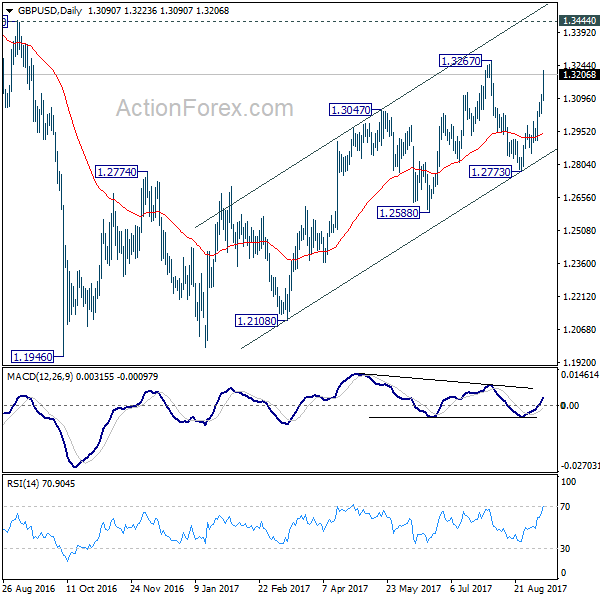