Dollar recovers mildly today as risk aversion eased slightly. Hurricane Irma is weakening as it moved past Tampa, Florida. Some analysts pointed out that damage of Irma is not as catastrophic as feared, even though it’s still devastating. Meanwhile, North Korea risk is temporarily eased after the weekend. The US has backed down on pushing toughest sanctions on North Korea. A watered down version will be tabled for vote in UNSC today. While the greenback trades mildly higher, it’s clearly outshone by Canadian Dollar and Sterling. Meanwhile, Yen and Swiss Franc are trading as the weakest ones. Gold is also notably weaker, hitting as low as 1335.2, comparing to Friday’s high at 1362.4. WTI crude oil is hovering tight range below 48 handle.

US watered down its proposal on North Korea sanction, UNSC to vote

A major focus today will be on United Nation Security Councils’ vote on fresh sanctions on North Korea. The US originally wanted to propose tougher measures that include bans on oil imports, textile exports and employment of works from North Korea. However, it’s reported that the US has backed down and scaled back the proposal before the vote. Now, the revised draft dropped the proposed complete oil ban. It’s changed to a cap on shipments of refined petroleum products at 2m barrels a year. Crude oil exports to North Korea would be maintained at current level. Workers ban was also diluted while freeze of leader Kim Jong-Un’s assets and national airline Koryo is dropped too. But even after that, it’s uncertain whether the proposal would be passed in UNSC. Two veto-holding members, Russia and China, are known to be against fresh sanctions on North Korea.

Meanwhile, geopolitical tension between the US and North Korea seemed to have eased moderately. North Korea did nothing provocative on the foundation day during the week end. However, North Korea did warned that "in case the U.S. eventually does rig up the illegal and unlawful ‘resolution’ on harsher sanctions, the DPRK shall make absolutely sure that the U.S. pays a due price.." And, "the forthcoming measures to be taken by the DPRK will cause the U.S. the greatest pain and suffering it had ever gone through in its entire history."

Sterling jumps on BoE talks, but it will face CPI test first

Sterling jumps broadly today on talk that BoE would step up its warning on interest rate later in the week. The central bank is widely expected to keep bank rate and asset purchase target unchanged. Based on current inflation outlook, there is also no imminent need for a hike. But BoE may reiterate that markets are under-estimating the scale of interest rate hikes in the coming years. And it may want households, business and investors to be well prepared. However, it should be noted that policy makers will have to look into inflation data to be released tomorrow. In particular, CPI is expected to climb back to 2.8% yoy in August. Any downside surprise there would intensify expectation that inflation won’t hit 3% handle as BoE projected. And that would knock Sterling back down. Of course, focus will also be on whether hawks Michael Saunders and Ian McCafferty would change their mind on voting for rate hike too.

Before that, eyes will be on a parliamentary vote of the so called Brexit "Repeal Bill" today. In short, the bill seeks to copy and paste EU laws into UK legislation so that UK will have the same functioning laws and regulatory framework at the time of Brexit. Brexit Secretary David Davis warned that a vote against the bill is "a vote for chaotic exit from the European Union". And he emphasized that "businesses and individuals need reassurance that there will be no unexpected changes to our laws after exit day and that is exactly what the repeal bill provides. Without it, we would be approaching a cliff edge of uncertainty which is not in the interest of anyone." The government will need to secure the votes today to move on to the next phase of the legislation process. Opposition Labour Party has already indicated that they will vote against unless there are concessions.

ECB Coeure warned of exogenous shocks to the exchange rate

ECB Executive Board member Benoit Coeure said today "compared with past demand shocks, policy will remain more accommodative for longer, thereby likely muting further the pass-through of any growth-driven exchange rate appreciation." He noted that current recovery in Eurozone is "driven by domestic demand". Therefore, Euro strength might "have less of an impact on growth than, for example, after the Great Financial Crisis." Stronger than expected growth this is has prompted ECB policy makers to consider scaling back the quantitative easing program. Coeur noted that "at the current juncture, however, the policy-relevant horizon – the ‘medium term’ concept in our monetary policy strategy – is likely to be longer given the persistence of subdued inflationary pressures." And he warned that "exogenous shocks to the exchange rate, if persistent, can lead to an unwarranted tightening of financial conditions with undesirable consequences for the inflation outlook."

A Japan Financial Services Agency adviser Naoki Ohgo warned that BoJ’s stimulus program is severely cutting into bank profits. "Only a handful of regional banks successfully making money in niche areas." Others are struggling to find new business models. And, unless regional banks boost profitability it "might not take long" for BoJ’s policies to finally destabilize the banking sector. Ohgo warned that "consolidation is inevitable". Meanwhile, Ohgo also pointed out that "despite abundant supply of cash in the economy, inflation did not reach 2 percent." Hence, "it’s clear that monetary easing wasn’t enough to generate inflation."

In China, the PBoC will unwind the rules on forex exchange forward reserve requirements that were implemented back in 2015. Back then the Renminbi exchange rate suffered prolonged depreciation after the devaluation in August 2015. The implementation of 20% reserve requirement was a move to halt the unwanted speculation in the exchanged rate. Effective today, the requirement is cut down to 0%. The move is seen by the markets as the government is adopting a more liberalized approach to Yuan trading. And it’s also an act to soften restriction on capital outflow. Released over the weekend, China CPI accelerated to 1.6% yoy in August, up from 1.4% yoy. PPI slowed to 5.4% yoy, below 5.5% yoy.

Intraday bias in GBP/USD remains on the upside and rise from 1.2773 should target 1.3267 resistance first. Break there will resume whole rise from 1.1946 and target 1.3444 key resistance next. But again, price actions from 1.1946 are still seen as a corrective pattern. Hence, we’d expect strong resistance from 1.3444 to limit upside to bring larger down trend reversal eventually. On the downside, below 1.3123 minor support will turn intraday bias neutral first.

In the bigger picture, overall, price actions from 1.1946 medium term low are seen as a corrective pattern. While further rise cannot be ruled out, larger outlook remains bearish as long as 1.3444 key resistance holds. Down trend from 1.7190 (2014 high) is expected to resume later after the correction completes. And break of 1.2773 support will be the first sign that such down trend is resuming. 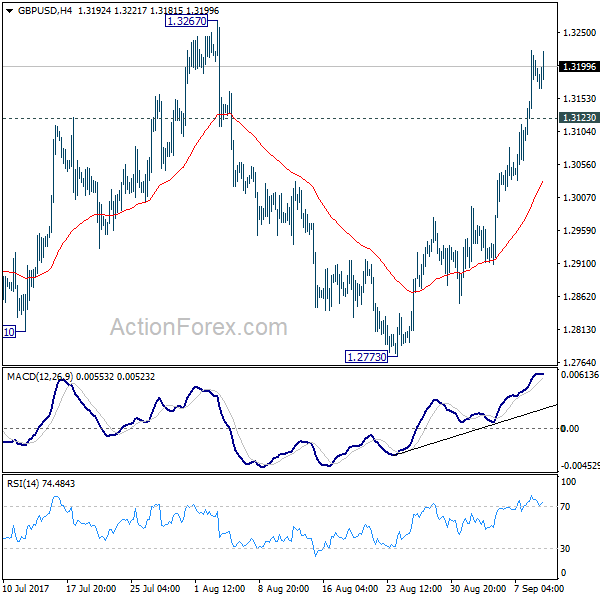 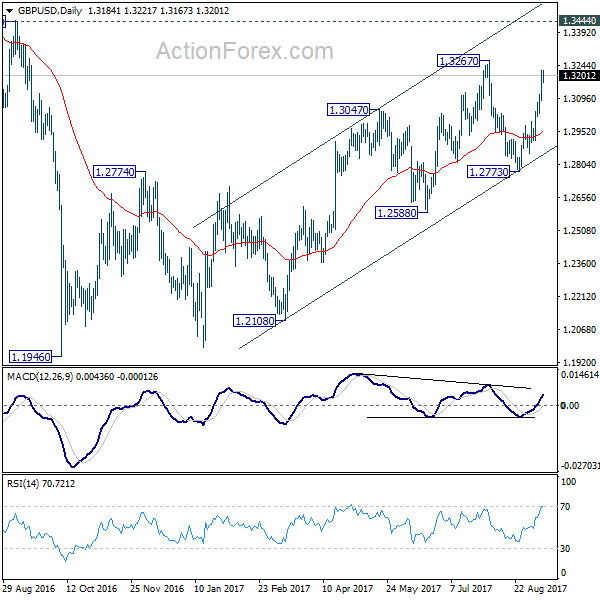