Sterling’s rally lost some momentum today after job data showed weaker than expected wage growth. Nonetheless, the Pound is still trading in firm tone as markets await tomorrow’s BoE rate decision. Dollar also weakens mildly after producer inflation data missed expectation. On the other hand, Canadian and Aussie are trading generally higher today. Gold is trying to regain some from after this week’s sharp pull back. But it’s yet to break above 1340 handle yet. WTI is back above 48.50 as recent corrective trading extends. There is no sign of momentum for a break through 50 handle yet. Released from US, headline PPI jumped to 2.4% yoy in August but missed expectation of 2.5% yoy. PPI core Rose to 2.0% yoy but also missed expectation of 2.1% yoy.

Treasury Mnuchin: Yellen is being consider by there are a lot others too

US Treasury Secretary Steven Mnuchin said that Fed Chair Janet Yellen is "obviously quite talented" and she’s "being considered" as the next Fed Chair after her term expires early next year. However, Mnuchin also noted that " there’s a lot of great people that we’ve been meeting with and considering as well." He declined to comment on front runner White House economic advisor Gary Cohn, nor Cohn’s relationship with President Donald Trump. Meanwhile, Mnuchin also reiterated that Trump’s administration is still working on getting the tax reform passed this year. There are talks that the corporate tax rates would be reduced from the current 35% to as low as 15%, or somewhere in between. Mnuchin just noted that the final level would put businesses at a "very competitive level" with other countries.

UK employment rate dropped to 4.3% in the three months to July. That’s the lowest level in 42 years since 1975. However, wage growth was disappointing. Average weekly earnings rose 2.1% 3moy only, below consensus of 2.3% 3moy. Jobless claims dropped -2.8k in August, better than expectation of 0.6k rise. Focus will turn to tomorrow’s BoE announcement. We expect the BOE to vote 7-2 to leave the Bank rate unchanged at 0.25% and the asset purchase at 435B pound. Despite overshooting of inflation, most members would remain cautious and cite slow economic growth and Brexit uncertainty as reasons for keeping the monetary policy accommodative. However, the MPC is expected to adopt a more hawkish tone and strengthen the warning of a weak sterling. The new deputy governor Dave Ramsden would be voting for the first time. He is perceived as a dove amidst his warning of dire consequences after Brexit. He is expected to vote to maintain the status quo in the first 9-member MPC meeting since May. More in BOE To Maintain Status Quo With New Comer On Dovish Side.

Brexit negotiations delayed for a week to Sep 25

The next round of Brexit negotiation between EU and UK is originally scheduled for next week, starting September 18. But it’s now be postponed by a week to September 25 to "allow more time for consultation". In a statement, UK said that "both sides settled on the date after discussions between senior officials in recognition that more time for consultation would give negotiators the flexibility to make progress in the September round." The decision came just a week after European Parliament’s chief Brexit negotiator Guy Verhofstadt said UK Prime Minister Theresa May was preparing to make an "important intervention… in the coming days".

EC Juncker: Wind is back in Europe’s sails

European Commission President Jean-Claude Juncker delivered optimism is his State of the Union speech. He told the European Parliament that "the wind is back in Europe’s sails." And, "now we have a window of opportunity, but it will not stay open for ever. Let us make the most of the moment: catch the wind in our sails." Meanwhile, he is pushing for a Minister of Economy and Finance, who should be the chair of all Eurozone finance ministers and be accountable to the European Parliament. And the minister will be in charge of issues not only for the Eurozone, but for all European Union countries. The key responsibility is on deeper economic and financial integration. This is an idea proposed by France and supported by Germany.

ECB Vice President Vitor Constancio expressed his confidence to hit its mandate eventually, "by keeping a sufficient degree of monetary policy accommodation". He also noted that "non-standard measures are going to be part of our toolkit for some time to come, and some of them might even be deemed standard measures at some point." And, the central bank will "continue using forward guidance to some extent" But Constancio maintained his criticism on it and noted that it’s an "imperfect tool", as "one of the various non-standard measures that we can activate when deemed necessary".

In Japan, Prime Minister Shinzo Abe declined to comment on who would succeed BoJ Governor Haruhiko Kuroda after his five year terms ends in April next year. And, Abe didn’t comment on whether Kuroda’s term would be renewed. But he hailed that Kuroda’s massive monetary stimulus has boosted employment and "created a situation where Japan was no longer in deflation." Abe emphasized that it’s important to hit the 2% target and "stabilizes at that level". And, "the government expects the BOJ to continue efforts to meet the target." Meanwhile, Abe said he’s still on track to raise sales tax from 8% to 10% in October 2019.

North Korea issued an official response to the fresh sanctions approved by United Nations Security Council earlier this week. The foreign ministry condemned the sanctions as "another illegal and evil" one as "piloted by the US. It said in a statement that it aimed at "completely suffocating its state and people through full-scale economic blockade". And it "served as an occasion for the DPRK to verify that the road it chose to go down was absolutely right." North Korea pledged to "redouble the efforts to increase its strength to safeguard the country’s sovereignty and right to existence." The country’s ambassador to the UN, Han Tae Song, also said yesterday that the country is "ready to use a form of ultimate means". And, "the forthcoming measures … will make the U.S. suffer the greatest pain it ever experienced in its history."

GBP/USD lost momentum after hitting 1.3328 and retreated. But with 1.3224 minor support intact, intraday bias stays on the upside. Current rally is expected to target 1.3444 key resistance next. At this point, we’d maintain that price actions from 1.1946 are still seen as a corrective pattern. Hence, we’d expect strong resistance from 1.3444 to limit upside to bring larger down trend reversal eventually. On the downside below, 1.3224 minor support will turn intraday bias neutral again. However, firm break of 1.3444 will carry larger bullish implication and target 1.3835/5016 resistance first zone first.

In the bigger picture, overall, price actions from 1.1946 medium term low are seen as a corrective pattern. While further rise cannot be ruled out, larger outlook remains bearish as long as 1.3444 key resistance holds. Down trend from 1.7190 (2014 high) is expected to resume later after the correction completes. And break of 1.2773 support will be the first sign that such down trend is resuming. However, considering bullish convergence condition in monthly MACD, firm break of 1.3444 will argue that whole down trend from 2.1161 (2007) has completed. And stronger rise would be seen back to 38.2% retracement of 2.1161 to 1.1946 at 1.5466. 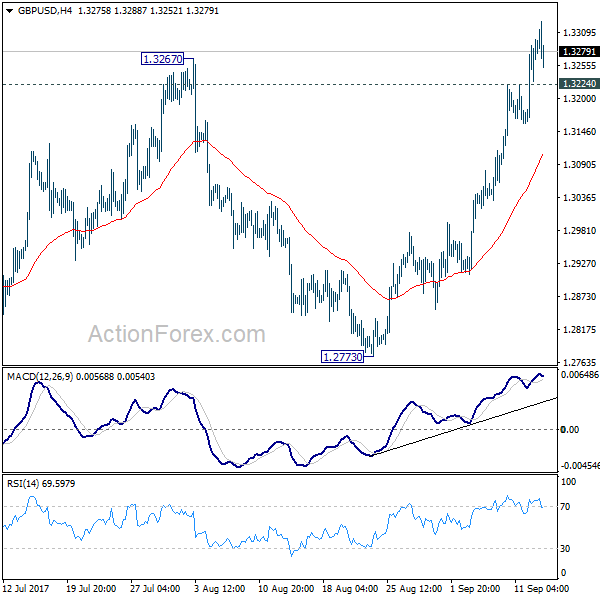 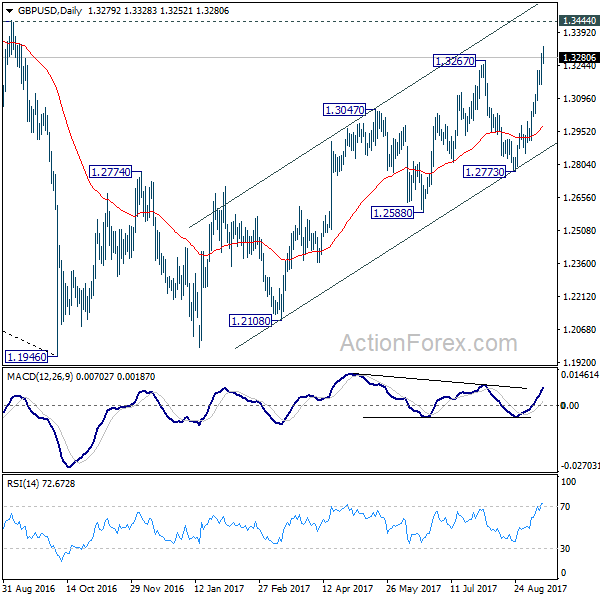