This is a quick update.

Dollar surges on news that the Americans will finally get the details of US President Donald Trump’s tax reforms in the upcoming weeks. House Ways and Means Committee Chairman Kevin Brady, the chief house tax writer, said the tax overhaul framework will be released in the week of September 25. Brady noted that the document will include "core elements of tax reports.

And he emphasized that there is "really the consensus of the tax writers themselves so that we’re working from the same page". The group of writers include Speaker Paul D. Ryan, Senate Majority Leader Mitch McConnell, Senate Finance Committee Chairman Orrin G. Hatch, Treasury Secretary Steven Mnuchin, and White House economic adviser Gary Cohn.

And, the tax writers are going to "take it from there on the details". And, Brady also said that the timetable is "still delivering this to the president’s desk this year".

Separately, Trump had a White House dinner with three Democratic senators yesterday. Another meeting is scheduled today with a bipartisan group of moderate House members, the Problem Solvers. Meanwhile, Trump also continued to put pressure on the Congress and "tweeted" that "with Irma and Harvey devastation, Tax Cuts and Tax Reform is needed more than ever before. Go Congress, go!"

Technically, in spite of the strong rebound this week, there is no clear confirmation of trend reversal in Dollar yet. EUR/USD is held well above 1.1822 support. USD/CHF held below 0.9679 resistance. AUD/USD held well above 0.7807 near term support. USD/CAD held well below 1.2412 support turned resistance. Nonetheless, thanks to the return of risk appetite, USD/JPY’s breach of 110.66 resistance is raising the chance of near term reversal. That is, the correction from 118.65 could have completed at 117.31. But we’ll have to see if USD/JPY can sustain above 110.66 resistance first. 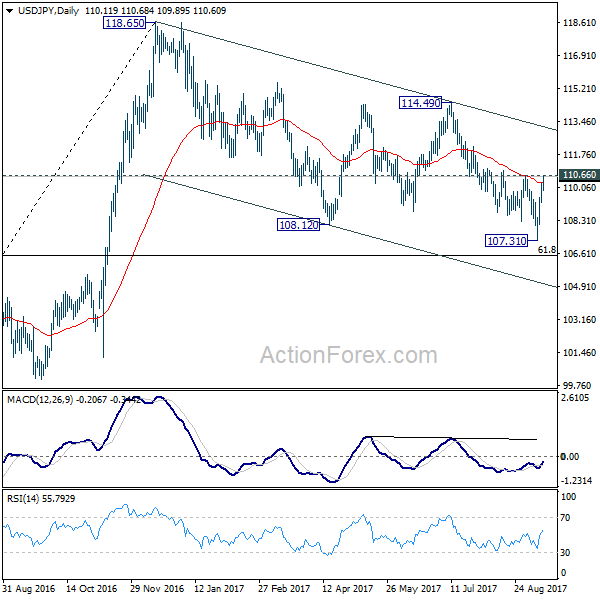 Meanwhile, the development in 10 year yield is worth a note. Yesterday’s break of 2..167 resistance argues that fall from 2.396 has completed. TNX follows with some resilience today. The whole correction from 2.621 could have be completed at 2.034. Near term focus is now back on 55 day EMA at 2.204. Firm break there would pave the way to 2.396 resistance to confirm this bullish case.