North Korean launched another missile test before the weekend. Even though it proves its capability of reaching Guam, market reactions are very muted this time. Japanese yen Yen and Swiss Franc remain the weakest major currencies for the week. And Nikkei maintains earlier gains and is trading up 0.5% at the time of writing. Sterling is set to end the week as the strongest one, riding on the hawkish BoE message that tightening would come within months. Dollar follows as the second strongest as supported by expectation of a tax reform plan later this month, and pick up in inflation. Indeed fed fund futures are now pricing in 52.9% chance of a Fed hike in December, up from 31% a week ago.

North Korea fired another ballistic missile over the northern Japanese island of Hokkaido today. It’s the second one that flied over Japan in less than a month. The missile reached an altitude of 770km and traveled 3700km before landing in the Pacific Ocean. It should be noted that the range of this missile test now proves that Guam is reachable. This came just after the United Nations Security Council approved fresh sanction earlier this week. US President Donald Trump hasn’t responded to the missile test yet. Instead, Secretary of State Rex Tillerson said in a statement that "these continued provocations only deepen North Korea’s diplomatic and economic isolation." Tillerson also urged China and Russia to take actions as "China supplies North Korea with most of its oil. Russia is the largest employer of North Korean forced labor."

South Korean President Moon Jae-in condemned the latest test and warned "we have the power to smash North Korea into powder and put it beyond recovery if it provokes us or our alliance."  Japan Prime Minister Shinzo Abe said the launch was "totally unacceptable" and went against "the international community’s strong, united will for a peaceful solution." Abe urged the international community to "unite and send clear message after North Korea’s dangerous provocation." And, "We must let North Korea understand there is no bright future for North Korea if it continues in this way."

As in a draft letter published by the media, UK trade group Confederation of British Industry is drawing support from business leaders to urge speedy and pragmatic progress of Brexit negotiation by October. The letter is organized by CBI, and is supposed to be signed by business leaders that "employ nearly one million people in the UK and EU." It emphasized the need to "make decisions now about investment and employment". And warned that "continuing uncertainty will adversely affect communities, employees, firms and our nations in the future." It called fall both sides to be "pragmatic and determined to move to the next stage of the negotiations." That is, "ensure that substantive progress is achieved during the upcoming negotiations." And, "enable discussion of transitional arrangements in October and trade, by the end of the year."

Market pricing in 50% chance on BoE hike in November

Overshooting of inflation has led BOE to turn more hawkish. As revealed at the September meeting minutes, "a majority of MPC members judge that, if the economy continues to follow a path consistent with the prospect of a continued erosion of slack and a gradual rise in underlying inflationary pressure then, with the further lessening in the trade-off that this would imply, some withdrawal of monetary stimulus is likely to be appropriate over the coming months in order to return inflation sustainably to target". Yet, it stressed that any rate hike "would be expected to be at a gradual pace and to a limited extent". The members forecast headline CPI would rise above 3% next month, following the stronger-than-expected 2.9% in September. The market has priced in about 50% of a rate hike in November, while the chance for a hike in February next year is fully priced in. More in Eyebrows Raised as BOE signaled to Hike Rates in Coming Months

New Zealand business manufacturing index rose to 57.9 in August. Eurozone will release trade balance today. But main focus will be on US data including retail sales, industrial production, U of Michigan confidence and business inventories.

Intraday bias in EUR/GBP remains on the downside as fall from 0.9305 is still in progress. Current decline is seen as the third leg of the consolidation pattern from 0.9304. Deeper fall should be seen to 61.8% retracement of 0.8312 to 0.9305 at 0.8691 and below. We’ll look for bottoming signal again at it approaches 0.8303 support. On the upside, above 0.8981 minor resistance will turn intraday bias neutral and bring recovery, before staging another fall. 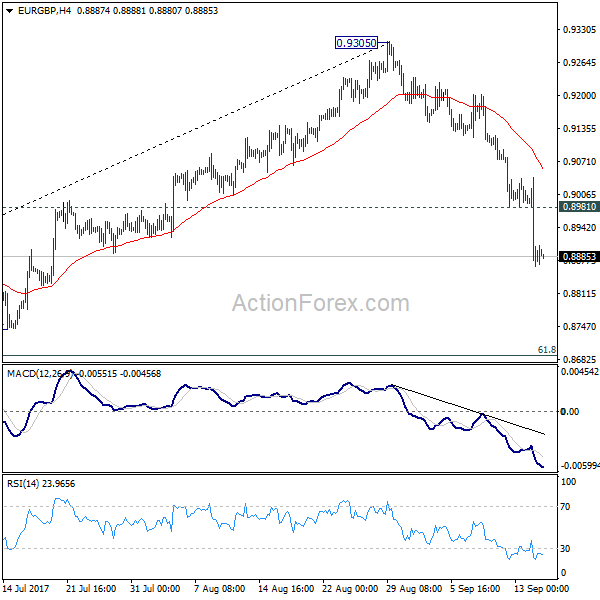