US equities surged to new records highs overnight as markets await FOMC’s announcement on balance sheet normalization. DOW closed up 39.45 pts or 0.18% at 22370.80. S&P 500 gained 2.78 pts, or 0.11%, to 2506.65. 10 year yield also extended recent rebound and rose 0.014 to 2.243. But Dollar is trading generally lower in Asian session today. For the week, Euro, Aussie and Kiwi remain the strongest ones. Meanwhile, Canadian Dollar is under pressure as rate hike speculations cooled. Strong risk appetite in the market is pressuring Yen as the second weakest. Markets have little to response to US President Donald Trump’s provocative talk to totally destroy North Korea.

US President Donald Trump threatened to "totally destroy" North Korea if the US is "forced to defend itself of its allies" in his 42-minute speech to the United Nations. He called North Korean leader Kim Jong-Un as a "Rocket Man on a suicide mission for himself and for his regime". Trump also emphasized in his speech that "as President of the United States, I will always put America first." And he further commented that "just like you, as the leaders of your countries, will always and should always put your countries first."

Earlier, United Nations Secretary General, Antonio Guterres, warned that "Fiery talk can lead to fatal misunderstandings, we must not sleepwalk our way into war." European Union Foreign Policy head Federica Mogherini also warned that "we don’t talk never never of destroying countries but about trying to bring peace in the world." French President Emmanuel Macron also said firmly that "France rejects escalation", and "any military intervention must be avoided."

China: Pyongyang and Washington persistent pursuit of their own interests

An editorial in the China Daily criticized that "today’s dangerous deadlock has been the result of Pyongyang’s and Washington’s persistent pursuit of their own interests in disregard of other countries’ efforts to persuade the two antagonists to talk". And, "his threat to ‘totally destroy’ if need be will, therefore, likely worsen the already volatile situation." South Korean President  Moon Jae-in said in a statement that "we view the speech as portraying a firm and specific stance on the key issues regarding keeping peace and safety that the international community and the United Nations are faced with." Japan Prime Minister Shinzo Abe is so far quiet on the topic.

Japan PMI Abe may push back timing for fiscal surplus

Talking about Abe, there are expectations that the will announce to dissolve the parliament after he returns from the US, and calls for a snap election, possibly next Monday. In a poll published yesterday, the conservative Sankei newspaper found 50.3% support for Abe’s cabinet, up 6.5% from last month. Disapproval also fell 9% to 40%. That’s well ahead of main opposition LDP, at 38%. It’s reported that Abe might be planning to push back the timing of primary budget surplus by a few years, from fiscal 2020 to later in the decade. And he wants to go ahead with the scheduled sales tax hike from 8% to 10% in 2019. And then use some of the revenue for social security and education.

Looking ahead, FOMC policy announcement and press conference is the focus of the day. It’s widely expected that Fed would formally announce the schedule of the long-awaited normalization of its USD 4.5T balance sheet. At the June meeting, the Fed revealed the plan to "gradually reduce" its securities holdings by "decreasing its reinvestment of the principal payments" received. Specifically, such payments will be reinvested only to the extent that they exceed gradually rising caps:

For payments of principal that the Federal Reserve receives from maturing Treasury securities, the Committee anticipates that the cap will be $6 billion per month initially and will increase in steps of $6 billion at three-month intervals over 12 months until it reaches $30 billion per month.

More details are awaited as the plan is formalized. Inflation has remained persistently soft despite the upside surprise in the August data. We believe some members would raise concerns that weak price levels might last longer than previously anticipated. There might be downward revisions in the inflation forecast in 2018. Meanwhile, there are some speculations that the Fed might reduce its average Fed funds rates projections.

AUD/USD’s recovery continues today but it’s staying well below 0.8124 resistance. Intraday bias remains neutral for the moment. The consolidation from 0.8124 could extend further. Another fall cannot be ruled out. But still, with 0.7807 support intact, near term outlook stays bearish and another rise is expected. Break of 0.8124 will turn bias to the upside and target 100% projection of 0.6826 to 0.7833 from 0.7328 at 0.8335 next. However, considering bearish divergence condition in 4 hour MACD, firm break of 0.7807 will indicate near term reversal and turn bias back to the downside for 0.7328 key support. 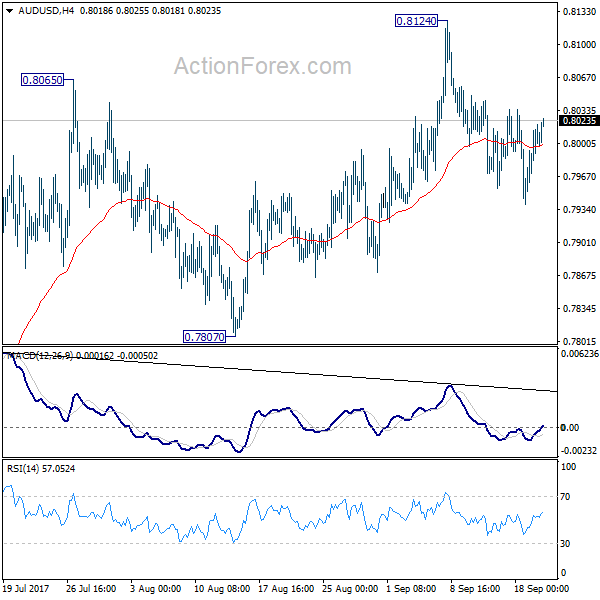 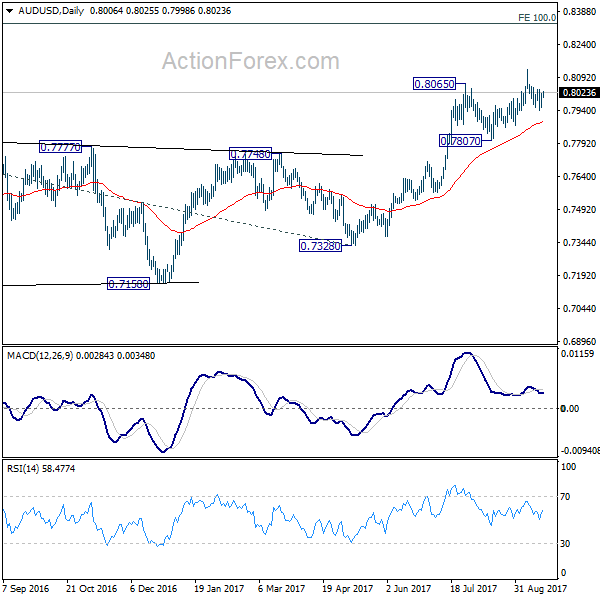 Will The BoJ And The ECB Join The Fed Or Show Strategic Prudence?