Risk sentiment stabilizes today with rebound in major European stocks while US futures also point to higher open. Selloff in commodity currencies slow a bit but they remain the worst performers, led by Aussie. Yen, Euro and Dollar are the stronger ones, and they’re mixed against each other. Sterling and Swiss Franc are also consolidating against Euro for now. Overall, trader might hold their bets first before tomorrow’s US CPI release.

Technically, Bitcoin is stabilizing after breaching 30k handle earlier today. But further decline is still expected with 35224 resistance intact. Current down trend from 68986 is expected to continue to 61.8% projection of 68986 to 33000 from 48226 at 25986. The next fall would likely come with another round of selloff in stocks, which would also be reflected in the FX markets too. 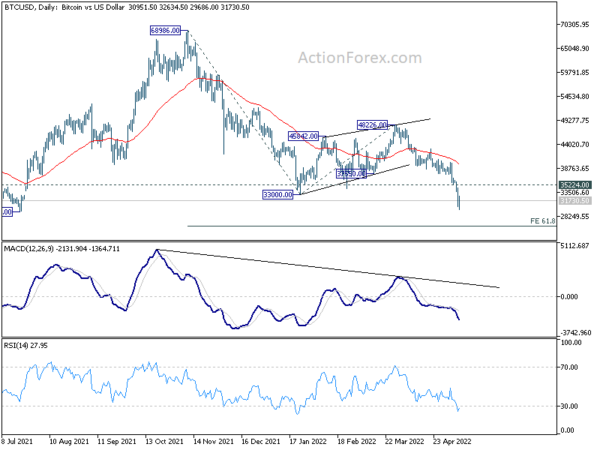 Fed Williams: To move expeditiously in bringing rate back to more normal levels this year

In a speech, New York Fed President John Williams said he expects the FOMC to “move expeditiously in bringing the federal funds rate back to more normal levels this year”. The ongoing pandemic and Ukraine war “bring a tremendous amount of complexity and uncertainty”. Fed will “need to be data dependent and adjust our policy actions as circumstances warrant.”.

For 2022, Williams expects core inflation to be nearly 4%, before falling to around 2.50% next year, then further decline to close to 2% long-run goal in 2024. He also expects GDP growth to be around 2% in 2022 while unemployment rate to remain around its current low level.

ZEW President Professor Achim Wambach: “The ZEW Indicator of Economic Sentiment increased moderately this month but still remains at a relatively low level. Compared to last month, the outlook for the economic situation in Germany is thus slightly less pessimistic. The experts still assume that it will continue to deteriorate, but at a lower pace than expected before.

“The strong restrictions in China to fight against new Covid-19 infections lead to a strong reduction in the assessment of the current economic situation in China. This is a heavy weight on the future development of the German economy.

With regard to the ECB’s monetary policy stance there is a large majority of experts expecting an increase in interest rates during the next six months. Accordingly they expect a decline of inflation rates from their very high current level.

BoJ Governor Haruhiko Kuroda said in an online seminar that the central bank has not decided on central bank digital currency (CBDC) yet. But he noted it could be an option for securing a seamless and safe infrastructure.

“CBDC is not the only way, so a national discussion is needed as to how to achieve this goal,” Kuroda said, adding, “retail level CBDC is an option.”

BoJ started the second phase of the CBDC experiments in April. The process will last for around a year.

BoJ Executive Director Shinichi Uchida told the parliament today, “Japan’s economy is still in the midst of recovering from the pandemic’s impact. It is recently under pressure from rising commodity prices… It’s therefore important for the BOJ to continue supporting economic activity with powerful monetary easing.” He also said BoJ has no plan to adjust the 50bps band allowed for 10-year JGB yield to fluctuate around 0%.

Separately, Finance Minister Shunichi Suzuki said after a cabinet meeting, “stability is important and rapid moves as seen recently are undesirable,” referring to Yen’s exchange rate. But he emphasized that any actions would follow the practice agreed with G7 partners.

NAB Group Chief Economist Alan Oster said: “Price growth eased somewhat in the April survey after hitting record rates in March, but remained high when looking at the history of the survey, supporting our expectation that inflation will remain elevated in Q2 and likely Q3.

“Still, the strong business conditions including trading conditions and profitability show that the economy is faring quite well and so far, demand is holding up in the face of higher inflation.” 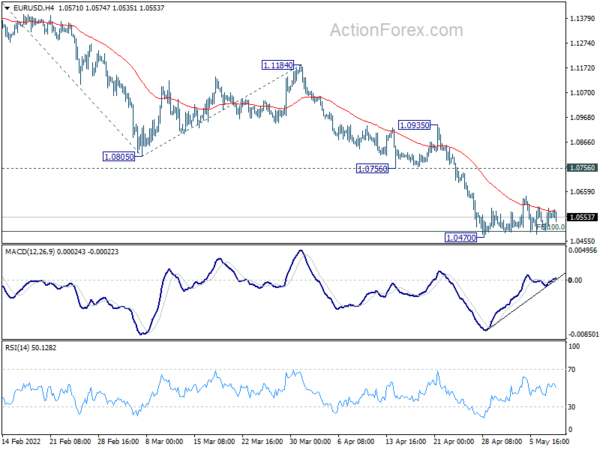 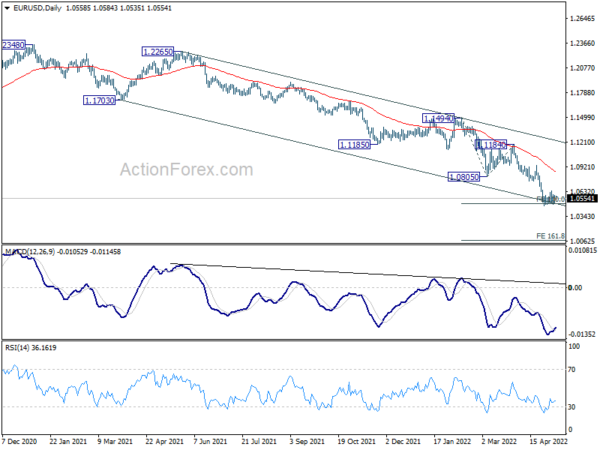