The financial markets responded to Fed’s hawkish announcement overnight rather positively. DOW gained 41.79 pts or 0.19% to close at 22412.59. S&P 500 rose 1.59 pts or 0.06% to end at 2508.25. Both indices made new record high. In short, Fed’s new economic projections showed that policymakers are still projecting another rate hike in December, and three more next year. Fed fund futures are pricing in 73.4% chance of a December hike, comparing to 57.7% chance a day ago, and 48.6% a week ago. 10 year yield rose 0.034 to close at 2.277, extend recent rebound from 2.034. Dollar is now trading as one of strongest for the week among Aussie and Kiwi. Yen and Swiss Franc are trading as the softest ones. Gold dipped lower and breached 1300 handle following Dollar’s strength.

The Fed finally made formal announcement that it would begin normalizing the balance sheet in October. As indicated in June, the process does not involve active selling of securities, but a passive run-off of its holdings. The policy rate also stayed unchanged at 1-1.25%. The overall tone of the statement and the press conference came in more hawkish than expected. Despite downward revision in the core CPI for this year, the staff upgraded the economic growth outlook and downgraded the unemployment rate forecast.

The median dot plot continued to project one more rate hike this year, followed by three more increases in 2018. As CME’s 30-day Fed funds futures suggested, bets for a December hike markedly jumped to 73.4% from 57.7% in the prior day. The overall tone signaled that the Fed is committed to carry on the rate hike schedule (three increases for 2017) as indicated earlier this year. Barring a ‘material’ change in the economic outlook, the Fed should implement its rate hike and balance sheet normalization policies any planned. More in Fed To Reduce Balance Sheet From October, Committed To One More Rate Hike This Year.

BoJ dove not that dovish

BoJ left monetary policy unchanged today as widely expected. Short term policy interest is kept at -0.1%. And the central bank will continue to dive 10 year JGB rate at around 0%. Annual pace of monetary base expansion is kept at JPY 80T under the yield curve control framework. The biggest surprise for the decision is that new comer Goushi Kataoka dissented as he believed that "monetary easing effects gained from the current yield curve were not enough for 2 percent inflation to be achieved around fiscal 2019". And Kataoka also "opposed the description on the outlook for the CPI" as " possibility of the rate of change increasing toward 2 percent from 2018 onward was low at this point."

But after all, Kataoka’s dovish voice is indeed not much of a surprise. He has been considered a vocal, firm advocate of aggressive monetary easing. And he’s believed to be brought in by Prime Minister Shinzo Abe to replace the relatively hawkish voice of former policymaker Takahide Kiuchi and Takehiro Sato. One could even argue that it’s actually a surprise that Kataoka is not dovish enough to push for rate cut of expanding the QQE program.

In Eurozone, ECB Governing Council member Klass Knot said that "the main rationale for central bank asset purchases has disappeared." And, "the appreciation of the euro should be considered a reflection of the relative strength and stability of the euro area economy." He said that is a " clear indicator of the factors that underlie the reduced necessity of continued asset purchases … supporting the call for a gradual but decisive rebalancing away from non-standard towards traditional instruments of monetary policy." But he emphasized that ending stimulus could pose some challenges by there is "no reason to be overly dramatic".

US ally South Korea approved a USD 8m of aid to North Korea’s children and pregnant women. The South suspended humanitarian aid to the North after the latter conducted its fourth nuclear test back in January 2016. But now, the government had decided to support programs by the United Nations Children’s Fund and the UN World Food Program in providing food and medicines to the North. The South’s Unification Ministry emphasized that the cash is not included in the assistance, and there is "realistically no possibility" that the North could use it to support its military.

North Korea responded to US President Donald Trump’s threat to totally destroy the country if the US and its allies are threatened. North’s Foreign Minister Ri Yong-ho told reporters near the United Nations headquarters that "even when dogs bark, the parade goes on". And, "if [Trump] was thinking about surprising us with the sound of a barking dog then he is clearly having a dog dreaming."

China’s Foreign Minister Want Yi warned that the situation in the Korean peninsula is getting more serious day by day. And Wang said "we call on all parties to be calmer than calm and not let the situation escalate out of control." China’s official newspaper also criticized that "Trump’s political chest-thumping is unhelpful, and it will only push the DPRK to pursue even riskier policies, because the survival of the regime is at stake."

USD/JPY’s rally from 107.31 extends to as high as 112.62 so far. Intraday bias is back on the upside for medium term channel resistance (now at 113.03). Sustained break there will argue that whole correction from 118.65 has completed too. In that case, further rise should be seen to 114.49 resistance for confirmation. On the downside, below 111.07 minor resistance will raise the risk of rejection from channel resistance and turn bias back to the downside for 55 day EMA (now at 110.53). 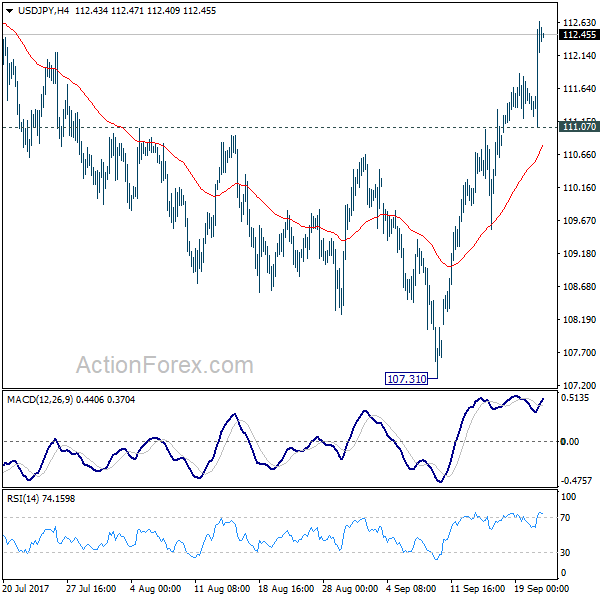 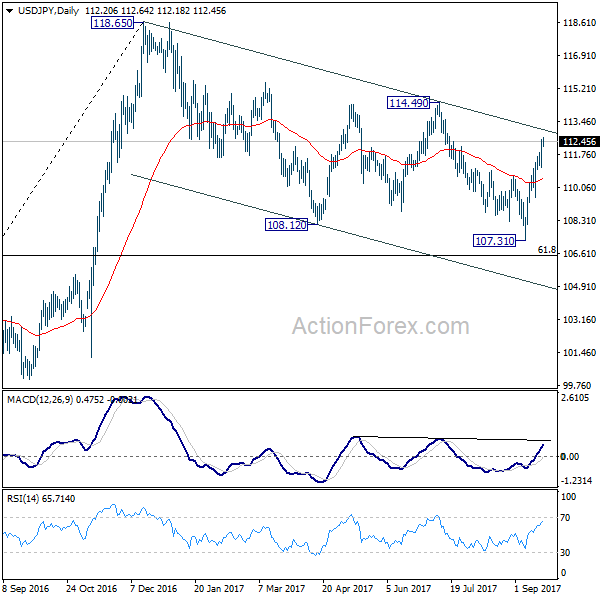