Gold Extends Decline While EUR/USD Holding on to 2017 Low

Overall, the forex markets are rather quiet as the week is heading to a close. EUR/USD is still holding above 2017 low but lacks any strength for a recovery. The greenback might still have a last push during the rest of the session. Meanwhile, Gold is a major mover today, and it’s now pressing 1800 handle. As for the week, Yen and Dollar remain the strongest while Kiwi and Aussie are the worst, followed by Euro. 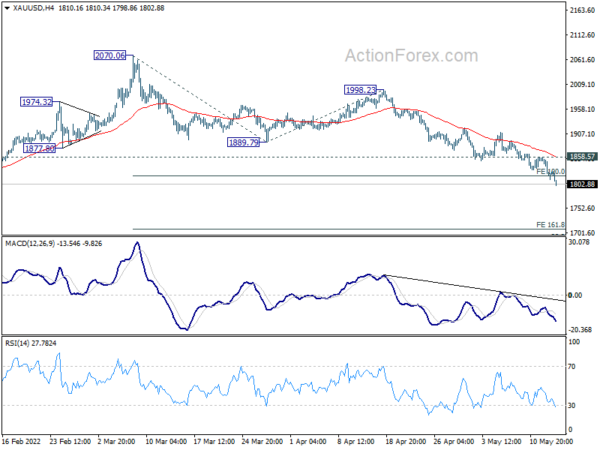 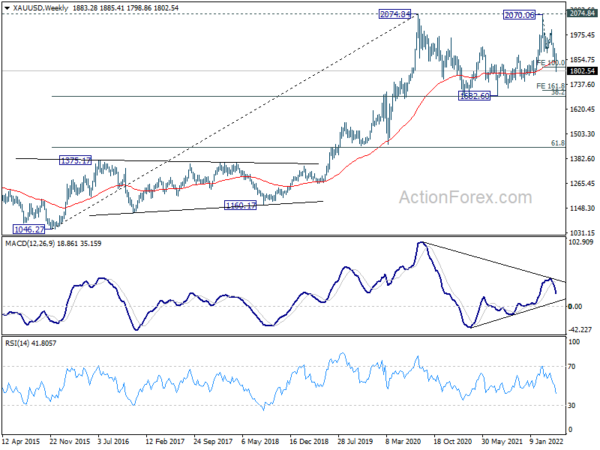 ECB Governing Council member Mario Centeno said normalization of monetary policy was “necessary and desirable”. But such normalization must be done gradually. He urged not to “over-react” to inflation rising across Europe or risk penalizing economic growth.

“Although inflation remains high in 2022, there are no structural reasons why it should not converge towards the medium-term objective as imbalances are gradually resolved and uncertainty dissipated,” Centeno said. “There are currently no structuring signs of de-anchoring inflation,” even though the balance of risks around inflation is skewed upward” after Russia’s invasion of Ukraine.

Second-order effects of wage pressures was “an additional risk which needs close and continued monitoring”, he added.

BoJ Governor Haruhiko Kuroda told the parliament, “it’s important for currency rates to move stably reflecting economic and financial fundamentals… The recent sharp, short-term fluctuations in the yen are undesirable, as it heightens uncertainty and makes it harder for companies to set business plans.”

“The economy is in the midst of a recovery and now faces headwinds from rising commodity prices,” Kuroda said. “It’s therefore important to underpin economic activity with powerful monetary easing.”

Separately, Kuroda also said in a speech, “the coronavirus pandemic is a major risk that could further hurt Japan’s economy.” As such, “it’s appropriate to maintain … the dovish bias of our guidance for the time being.”

“For inflation to heighten as a trend, Japan must see a shift from inflation caused by energy prices, to one that is driven by increasing corporate profits and wage growth,” he said.

Intraday bias in EUR/USD stays on the downside at this point. Decisive break of 1.0339 long term support will carry larger bearish implication and target 161.8% projection of 1.1494 to 1.0805 from 1.1184 at 1.0069. On the upside, break of 1.0641 resistance is needed to indicate short term bottoming. Otherwise, outlook will stay bearish in case of recovery. 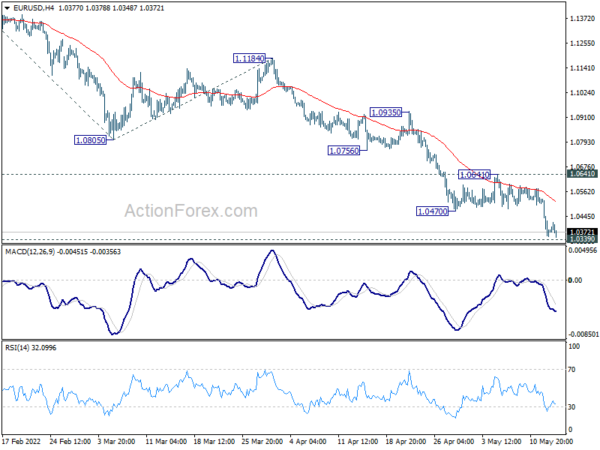 In the bigger picture, break of medium term channel support suggests downside acceleration. Current decline from 1.2348 (2021 high) is probably resuming long term down trend from 1.6039 (2008 high). Retest of 1.0339 (2017 low) low should be seen next. Decisive break there will confirm this bearish case. This will now remain the favored case as long as 1.0805 support turned resistance holds. 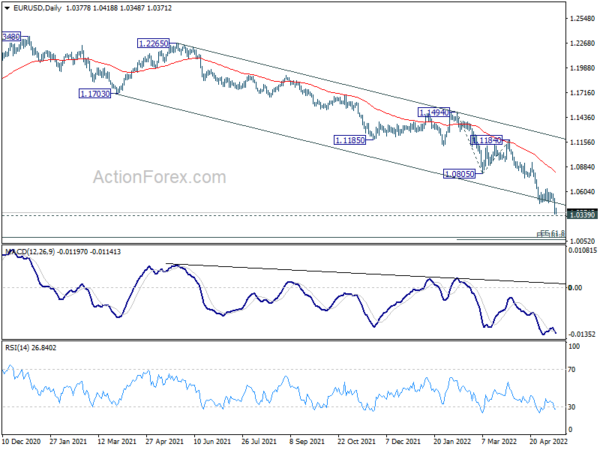