Yen trades broadly lower today after BoJ left monetary policy unchanged, including keeping the 10-year JGB yield cap. Selling is not too fierce for now on mixed sentiment in the Asian markets. But if global stocks stage a pre-weekend rebound, the decline in Yen could quickly intensify. Meanwhile, Swiss Franc is still the strongest one for the week after SNB’s rate hike yesterday. Commodity currencies are broadly lower, led by Canadian,

Technically, both EUR/JPY and GBP/JPY breached minor resistance levels at 141.48 and 165.14. The development suggests that near term pull back could be finished, and stronger rise could be in favor. The question is, if that happens, whether that would be accompanied by stronger rebound in EUR/USD and GBP/JPY. Let’s see. 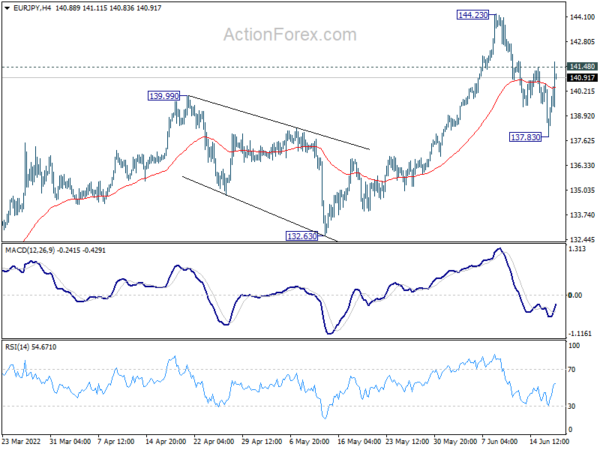 BoJ left short-term policy interest rate unchanged at -0.10%, and 10-year JGB target at around 0% under the yield curve control. It will continue to defend the 0.25% 10-year JGB yield cap, by offering to purchase it at the rate on every business day through fixed-rate purchase operations.

The decision was made by 8-1 vote. Goushi Kataoka dissented again, pushing for further strengthening monetary easing by lowering short- and long-term interest rate.

The central bank also said “it is necessary to pay due attention to developments in financial and foreign exchange markets and their impact on Japan’s economic activity and prices.”

CHF/JPY resumes up trend towards 140

CHF/JPY’s up trend resumes this week on diverging monetary policy of SNB and BoJ. SNB surprised the markets by announcing a 50bps rate hike yesterday, and indicated that more is coming. However, BoJ just kept policy unchanged today, with yield cap maintained at 0.25% too. At the same time, risk aversion is supporting both, making things even.

Also, note that CHF/JPY is extending a healthy long term up trend that started at 101.66, still in acceleration mode. 2015 high at 151.22 is a feasible target is policy of SNB and BoJ continues to diverge. 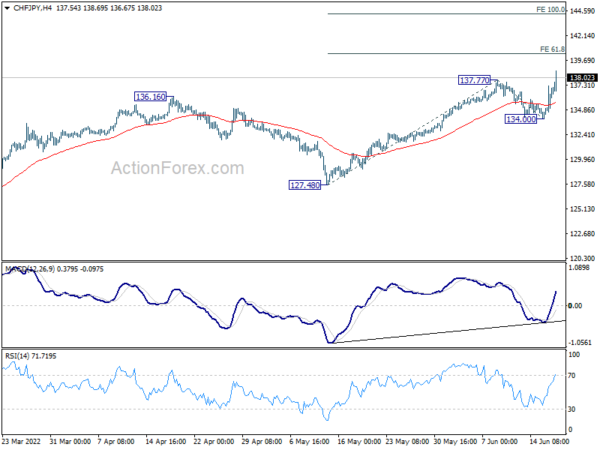 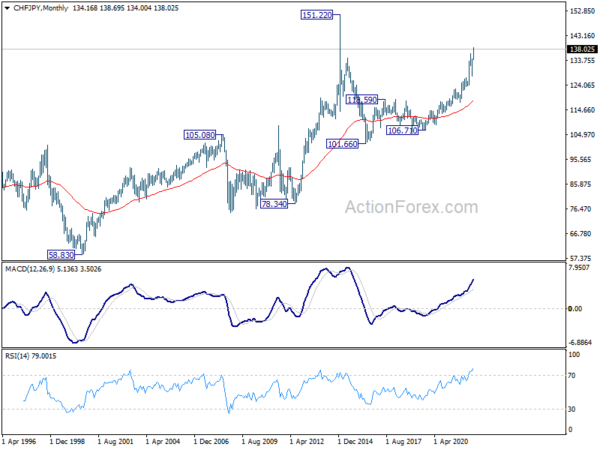 BNZ Senior Economist, Craig Ebert stated that “The net result of the sub-index values was the inference that excess demand alleviated during May. New orders are perhaps the cleanest representation of demand, while deliveries speak more to the supply side. To the extent excess demand is abating, so too will be core inflation pressure”.

Italy trade balance and Eurozone CPI final will be release in European session. Canada will release IPPI and RMPI while US will release industrial production later in the day.

Intraday bias in EUR/USD is turned neutral first as it recovered ahead of 1.0339/48 support zone. Outlook will stay bearish as long as 1.0786 resistance holds. Sustained break of 1.0339/48 will resume larger down trend. Next target is long term projection level at 1.0090. 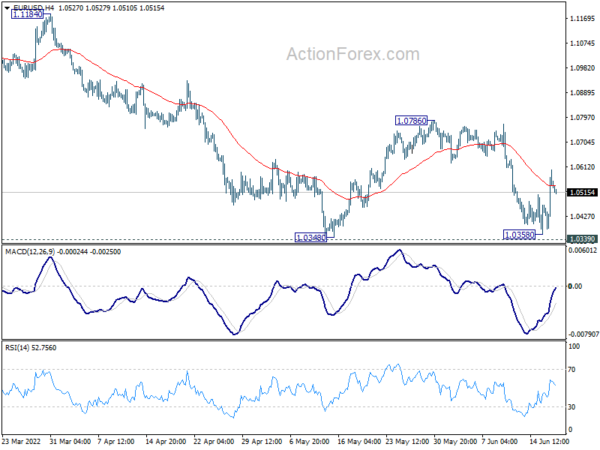 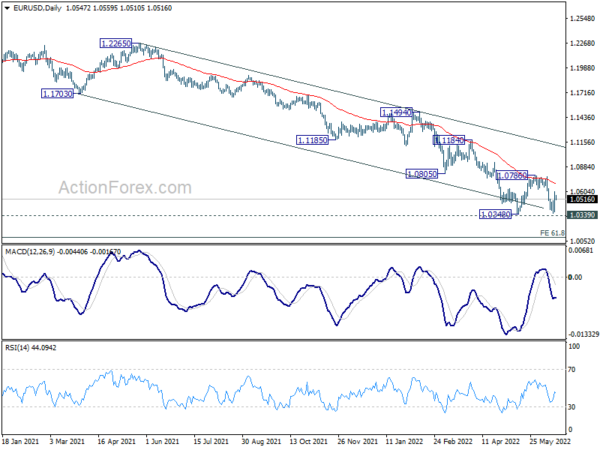