The financial markets responded quite positively to US President Donald Trump’s tax plan in spite of some criticisms. Most notable movements are seen in treasury yields. 10 year yield closed up 0.080 at 2.309, resuming recent rise from 2.034 and is on course to 2.396 resistance. 30 year yield also resumed recent rally and ended up 0.093 at 2.863. Stocks also strengthened with S&P 500 hitting new intraday high at 2511.75 before closing at 2507.04, up 0.41%. DOW gained 0.25% to close at 22340.71. Fed fund futures are pricing in 83% chance of December hike, up from 73% a week ago. Dollar extended this week’s advance, in particular, it’s picking up momentum against commodity currencies.

In the framework proposed by Trump and Republicans released yesterday, tax rates on corporations would be set at 20%, down from the current 35%. Businesses would also be allowed to immediately write off their capital spending for five years at least. Pass through business tax rate would be capped at 25%. For individuals, the number of tax brackets are reduced from seven to three. The new tax brackets would be 12%, 25% and 35%, with top rate down from current 39.6%. The Congress would be given the flexibility to add a fourth rate for higher earners.

The question now is on how the Republicans are going to push the plan through Congress, and complete by year end as Trump is asking for. The plan was hailed by some Republicans which we’re not going to repeat here. On the other hand, the Committee for a Responsible Federal Budget estimated that the plan would equate to a USD 2.2T tax cut with USD 5.8% lost to lower rates and USD 3.6T recouped by eliminating deductions. There is no estimate on the impact to growth, and thus tax revenue yet. And there is no details on how to fill up the gaps left by the lost in revenue. At the same time, the criticism that the plan only benefits the wealthy, with modest help to the middle class, remained.

The jump in TNX (10 year yield) further affirm the case that correction from 2.621 is completed at 2.034 already. Near term outlook will remain bullish as long as 2.215 support holds. Further rise is expected to 2.396 resistance next. Break will pave the way to retest 2.621 high. Such a development could likely help push dollar index (current at 93.36) through 94.14 near term resistance to confirm trend reversal. And that will be accompanied by deeper fall in EUR/USD through 1.1661 support and USD/JPY through 114.49 resistance.

Canadian Dollar tumbled overnight after comments from BoC Governor Stephen Poloz. Poloz sounded like he wanted to tame down speculations for further rate hike by the central bank. He emphasized that there is no "predetermined path" for interest rates, decisions will be "data-dependent" and policy makers could "still be surprised in either direction". And he spelled out some risks ahead too as the reactions to the recent two rate hikes are uncertain, especially given high household debt. And there uncertainties from the "moving target" nature of full capacity, impacts of technology on inflation and sluggish wage growth. Poloz also mentioned geopolitical concerns and trade protectionism. But at least, for now, Poloz believed that "at a minimum, that additional stimulus is no longer needed", referring to the impact of oil price collapse back in 2014/15.

New Zealand Dollar remains the weakest one for the week after RBNZ rate decision. As widely anticipated, RBNZ left the OCR unchanged at 1.75% in September Policymakers downgraded the domestic growth outlook and suggested that the accommodative monetary policy would stay for a ‘considerable period’. Thanks to the recent decline in New Zealand, driven by heightened political uncertainty, RBNZ tweaked its warning over currency strength. It noted that a lower exchange rate would "would help" raise tradables inflation. We expect RBNZ to keep the policy rate unchanged for the rest of the year, and likely through 2018. More in RBNZ Downgrades Growth Outlook While Keeping OCR At 1.75%

USD/CAD’s rebound from 1.2061 extended to as high as 1.2503 so far. The strong break of 1.2412 support turned resistance and upside acceleration carries bullish implications. The pair should have now successfully defended key long term fibonacci level at 2.1048. Near term outlook is turned bullish for 1.2777 resistance first. Decisive break there will target 38.2% retracement of 1.4689 to 1.2061 at 1.3065 next. And, this will be the preferred case as long as 1.2326 support holds. 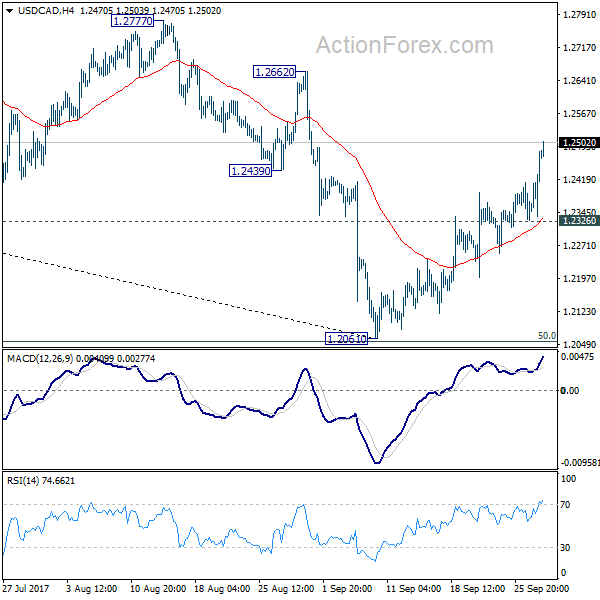 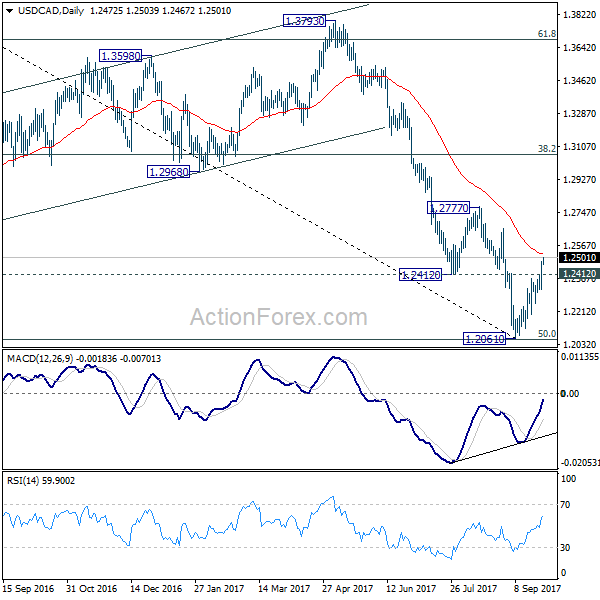