Dollar weakens pare gains as markets are heading to weekly close. In particular, Swiss Franc has overtaken Dollar’s place as the strongest one for the week. Economic data from US are providing little boost for the greenback. Instead, tamer than expected inflation is weighing mildly on Dollar. And traders should be taking profit at quarter end, and ahead of next week’s employment data. Meanwhile, some more time is needed to reassess the impact of US President Donald Trump’s tax plan, before traders take a more decisive stance. US personal income rose 0.2% in August, spending rose 0.1%, in line with consensus. Headline PCE was unchanged at 1.4% yoy while core CPI slowed to 1.3% yoy. Both were below expectations. From Canada, GDP rose 0.0% in July, below expectation of 0.1% mom. IPPI rose 0.3% while RMPI rose 1.0% mom in August.

BoE Governor Mark Carney said in a BBC radio interview that "if the economy continues on the track that it’s been on, and all indications are that it is, in the relatively near term we can expect that interest rates would increase somewhat." That is affirming to the view that BoE will hike in the next MPC meeting in November. Carney also noted that there is a "speed limit" for UK’s growth. Brexit will be as immigration slows and investment in capacity being held off, the economy will not be able to grow as fast as before, without pushing up inflation. And, "if the speed limit has slowed and we’re in a position where we’ve used up a lot of the capacity in this economy … it means that we should be thinking about, and we are open about this, we’re thinking about taking our foot a bit off the accelerator."

In Eurozone, German Chancellor Angel Merkel hailed French President Emmanuel Macron’s proposals on EU reforms. She said that Macron’s ideas could be the foundation for an "intense" Franco-German cooperation on the future of Europe. And, Merkel noted that "as far as the proposals were concerned, there was a high level of agreement between German and France. We must still discuss the details, but I am of the firm conviction that Europe can’t just stay still but must continue to develop."  Meanwhile, Macron said after an EU summit dinner that "we’re all convinced Europe must move ahead faster and stronger, for more sovereignty, more unity and more democracy."

Summary of opinions in the September BoJ meeting showed that one policymaker called for expanding monetary stimulus. Meanwhile, all other nine-members were in consensus to maintain the current program. The dovish member was quoted saying that "it’s necessary to stimulate demand further with additional monetary easing to achieve and stabilize inflation at the BOJ’s target, given a scheduled sales tax hike in October 2019." The dissenting member was not named in the summary, but it’s rather clear that the meeting statement showed newcomer Goushi Kataoka dissented last time. And Kataoka is widely known as a dove that advocates aggressive easing. The summary also showed concerns over escalating tensions between US and North Korea. One member was quoted saying that "if geopolitical risks heighten further, the BOJ must be ready to consider taking necessary policy adjustments to prevent deflationary mindset from re-emerging."

USD/CHF continues to gyrate lower today but overall outlook is unchanged. On the upside, decisive break of 0.9772 key resistance will suggest that whole down trend form 1.0342 has completed. In that case, near term outlook will be turned bullish for 0.9860/1.0099 resistance zone. Nonetheless, with 0.9772 resistance intact, outlook remains bearish. Below 0.9587 minor support will turn bias back to the downside for retesting 0.9420 low. 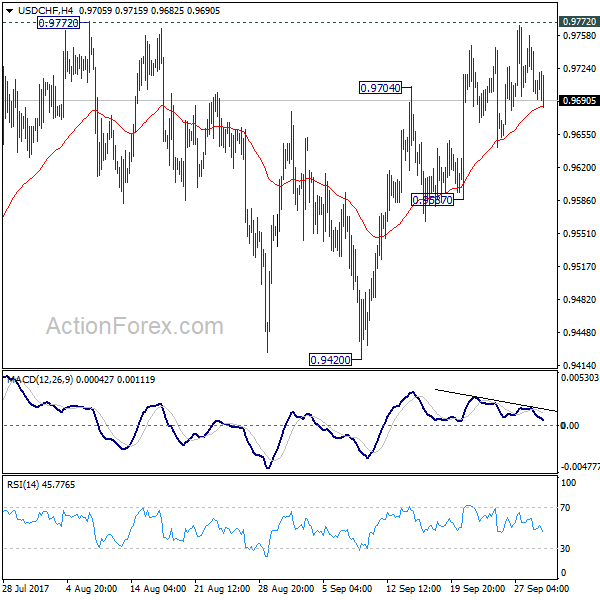 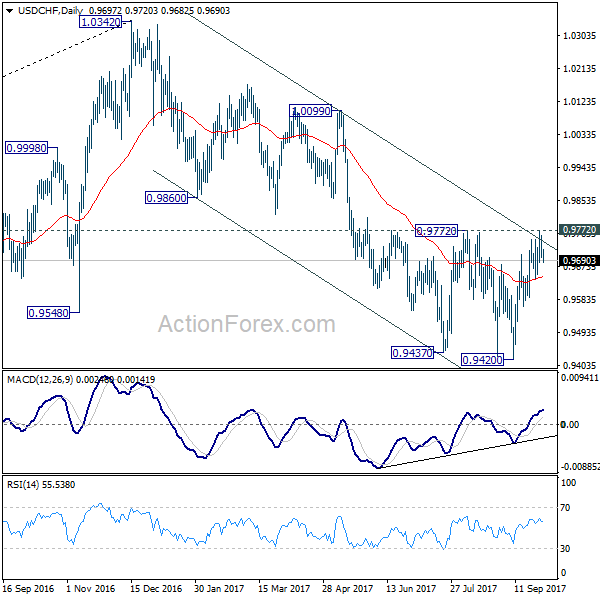