Dollar remains generally soft today after job data comes in slightly below expectation. ADP report shows 135k growth in private sector jobs in September, slightly below consensus of 140k. Prior month’s figure was revised from from 237k to 228k. For the week, the greenback is trading as the second strongest, next to Aussie. But it’s pointed out in out earlier report that Dollar struggles to power through key near term resistance against Yen, Swiss Franc and Aussie. Elsewhere, Sterling attempts a recovery after better than expected PMI services but there is no follow through buying seen. In other markets, Gold is trying to regain 1280 after dipping to as low as 1271 earlier this week. WTI crude oil is trying to dry support from 50 after last week’s steep selloff.

Outgoing Fed Vice Fischer: We will have higher inflation

Out-going Fed Vice Chairman Stanley Fischer said that the current soft batch of inflation data will not last. And "we will have higher inflation" as wages will rise "at some stage". Fischer declined to comment on who he prefers as the next Fed chair after Janet Yellen’s term expires next year. Fischer said that it’s a "choice clearly of the president and the administration". Nonetheless, he also noted that Fed chair should have "the flexibility of mind to see that he or she needs to take a different route at a particular moment in time or over the next year or two." It’s believed that US President Donald Trump has met four candidates already, including Yellen, chief economic advisor Gary Cohn, Fed Governor Jerome Powell and former Fed Governor Kevin Warsh. Standford University economist John Taylor is reported to be in the short list too.

UK PMI services rose to 53.6 in September, up from 53.2 and above expectation of 53.2. Markit noted that "service providers commented on subdued business-to-business sales and delayed decision making on large projects in response to Brexit-related uncertainty." And, "the net balance of survey respondents anticipating a rise in business activity over the next 12 months was the lowest since June, meaning that business confidence remained close to its weakest since the end of 2011." Also from UK, BRC shop price index dropped -0.1% yoy in September.

Rating agency S&P said it’s "a bit sceptical" that UK economy justifies an interest rate hike soon. And it noted in a statement that "Overall, we believe the Bank and Mark Carney’s recent statements are primarily aimed at propping up sterling to reduce imported inflation pressures. This strategy may include an actual 25 basis point hike in November, thus bringing the policy rate back to where it was before the Brexit referendum. Additional moves in 2018 do not appear warranted on the back of a slowing economy." Meanwhile, S&P also warned that there is a high risk of a disruptive Brexit with "tangible lack of progress" and ongoing "infighting within the UK political establishment.

Members of the European Parliament voted to delay trade discussions with UK until there is a "major breakthrough" in the negotiation. The motion was backed by 557 MEPs, with 92 against and 29 abstained. While the vote was not binding, it did show the united stance among EU officials on the issue. And, some EU officials are clearly dissatisfied with the way UK is taking the negotiations. The Parliament’s chief Brexit spokesman Guy Verhofstadt blamed the open splits among UK officials for the of progress. He pointed out that "there are differences between Hammond and Fox… and Johnson and May."

ECB Governing Council member Ewald Nowotny said that policymakers are "aiming for the prospect of a cautious normalization" of monetary policies. And he explained that "Caution means not hitting the brakes abruptly, but slowly taking your foot off the pedal." And added that "not only with cars but also with central banks, there is the problem of braking distance – and therefore I think it is wise to drive at a safe distance, but to react quickly to problems as they arise." He also acknowledged that inflation has stayed below 2% target for some time and there were debates on whether Eurozone is now in a long period of low inflation. He also noted that " it is not so easy to explain to the public why an inflation rate of 1.5 percent is so much worse than an inflation rate of 1.9 percent."

In Spain, Catalan President Carles Puigdemont said he would ask the region’s parliament to declare independence after finishing counting the votes of the independence referendum. He noted that "this will probably finish once we get all the votes in from abroad at the end of the week and therefore we shall probably act over the weekend or early next week." Meanwhile, Spanish High Court launched an investigation against top Catalan police and referendum organizes for inciting rebellion against the state. Head of Catalonia’s regional police Josep Lluis Trapero is included in the probe. Yesterday, Spanish King Felipe VI criticized that Catalan leaders have broken the law of the stat and showed and "inadmissable lack of loyalty."

Released from Eurozone, retail sales dropped -0.5% mom in August. Services PMI was revised up by 0.2 to 55.8 in September.

Bank of Japan Deputy Governor Hiroshi Nakaso said that during the exit of monetary stimulus, the BoJ could incur "red ink". But he expressed his confidence that "short-term fluctuations in the BOJ’s revenues won’t disrupt our policy-making." And, the central bank could learn from Fed’s experience on tapering of quantitative easing. Meanwhile, Nakaso also urged the government to take a "balanced" approach on fiscal policies and emphasized that "it’s important to create a sustainable fiscal framework in Japan." This was seen as a response to Prime Minister Shinzo Abe’s plan to delay the target of reaching primary budget surplus by a few years.

USD/JPY continues stay in tight range below 113.25, around medium term channel resistance. Intraday bias stays neutral at this point. On the upside, sustained break of medium term channel resistance will argue that correction from 118.65 is already completed with three waves down to 107.31. Break of 114.49 will confirm this bullish case and target a test on 118.65 next. On the downside, considering bearish divergence condition in 4 hour MACD, break of 111.46 will suggest rejection from the channel resistance and turn bias back to the downside. 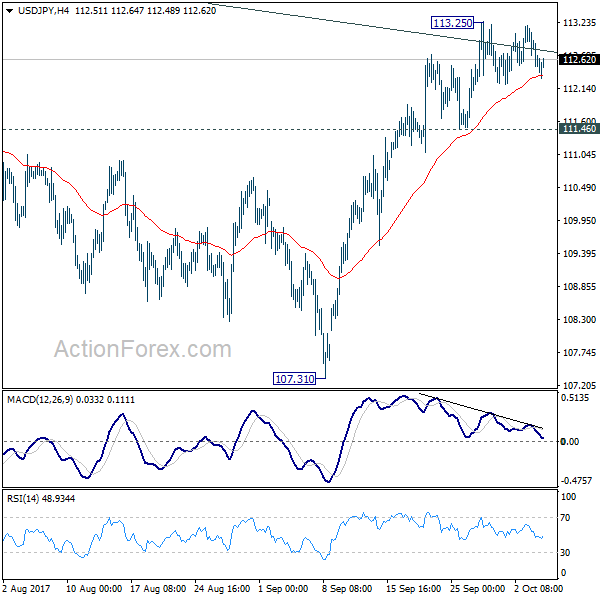 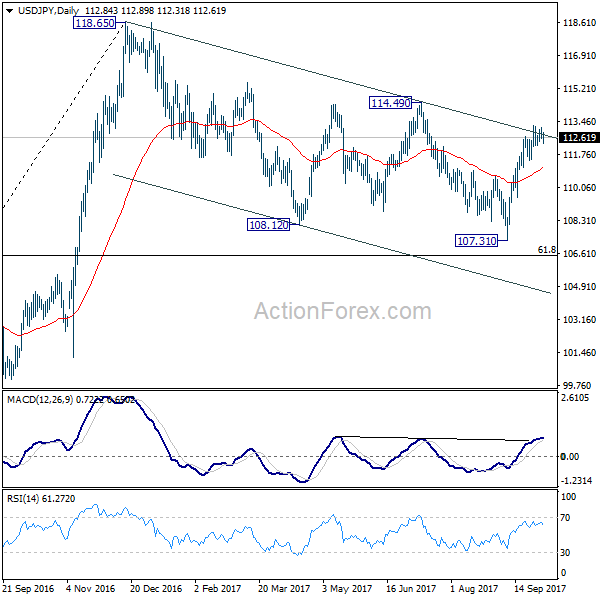