Dollar traders broadly higher today and remains as the strongest major currency for the week. The greenback is boosted by news that US President Donald Trump’s administration is finally moving a procedural step on the tax plan. Optimism was also seen in the stocks markets as DOW, S&P 500 and NASDAQ all extended the record runs. Elsewhere, Sterling remains the weakest one for the week as troubled by political uncertainties in UK, and weak economic data. Nonetheless, Australian Dollar is sold off sharply in Asian session after RBA board member Ian Harper said he won’t rule out a rate cut.

The Republican controlled House approved a fiscal 2018 spending blueprint yesterday, by 219-206 vote. It’s a procedural step forward for US President Donald Trump’s tax plan. With the blueprint, Republicans can now pass the tax bill by a simple majority vote in the Senate. As there are 52 out of 100 Republicans there, the Democrats could be bypassed. The move is seen by the markets that Trump’s administration is finally taking the job of tax cut (or reform) seriously.

However, there are still a loud voice of opposition of Trump’s tax plan. San Francisco Fed President John Williams criticized that slashing tax rates could only boost short-lived growth. He pointed to analysis of Trump’s proposals and said they "mostly boost demand and tend to have relatively small" impacts on labour supply and productivity.

Without targeting to raise productivity and growth potential, the tax cut could only promote "unsustainable" growth. And, such unsustainable could be easily undone by asset price bubbles, inflation and even recessions. He emphasized that "having policies that don’t kind of maintain this sustainable path, stable inflation, will just end up, we know from history, creating potential recessions or high inflation or other problems and that doesn’t benefit anybody."

Regarding monetary policy Williams said that "favorable employment numbers, combined with the findings on inflation and the steady pace of growth, are all behind my confidence that rates will need to rise to their new normal levels." Meanwhile, he noted that "conventional monetary policy has less room to stimulate the economy during an economic downturn." And, in those cases, Fed could need to "lean more heavily" on unconventional tools.

Kansas City Fed President Esther George said that it is "appropriate" to move interest rate "cautiously" at "this stage of expansion". She added that "moving interest rates at a gradual pace toward a level consistent with longer-run growth is the best step to help promote a continuation of the economic expansion." And there, "further gradual rate adjustments will be needed."

Philadelphia Fed President Patrick Harker said that US GDP growth will be "slightly above" 2%. And "until we see some other changes on the fiscal side of the house, we’re not going to move that growth rate too much." Meanwhile, he is still supporting another rate hike this year and three more for next. Though he added that policymakers will "have to see how the inflation dynamics play out".

Non-farm payroll report is the main feature for today. NFP is expected to show 77k growth in the job market in September. That would be less than half of August’s 156k, mainly due to the impact of hurricanes. Unemployment rate is expected to be unchanged at 4.4%. Expectation on wage growth is high as average hourly earnings could grow 0.3% mom.

The 77k expectation could have overestimated the impact of the hurricanes. After all, ADP report showed 135k private job growth, which wasn’t too bad. Employment component of ISM manufacturing rose to 60.3, up from 59.9. Employment component of ISM non-manufacturing rose slightly to 56.8. Both are rather respectable numbers. 4-week average of initial claims rose 18k to 268k, still a very low number historically. Continuing claims was relatively unchanged at around 1.94m.

There are rooms for an upside surprise in today’s NFP. Meanwhile, the biggest downside risk is on wage growth. 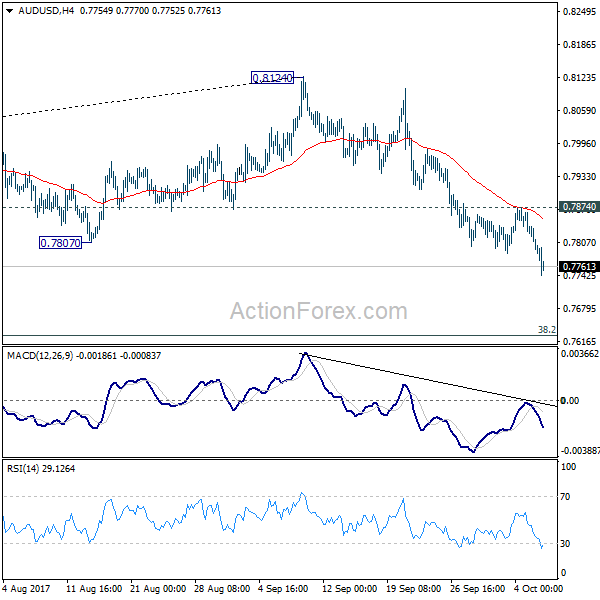 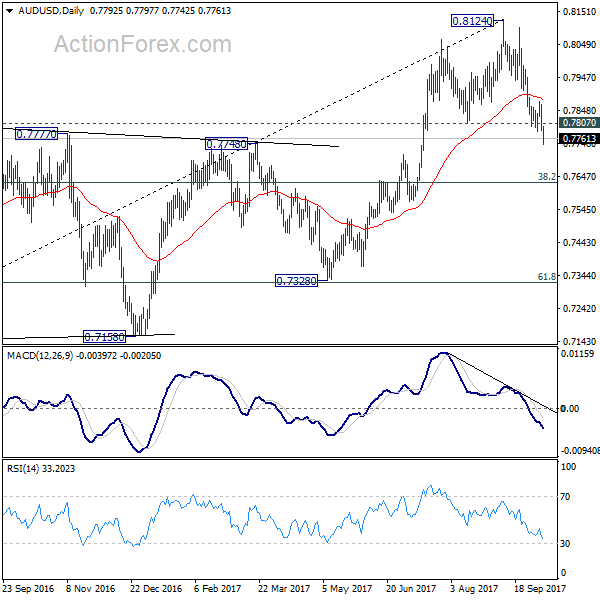