Overall, the movements in the markets remain indecisive. Yen is staying soft after reversing all of earlier gains in the week, but holds above near term support levels. Dollar is stuck in familiar range against European majors and commodity currencies. The hawkish FOMC minutes provided no inspiration to the greenback. While Aussie surged yesterday, there is no follow through buying so far. Traders are generally on the sideline awaiting tomorrow’s non-farm payroll data from the US.

Technically, as Yen crosses are rebounding, attention will be on some near term resistance levels, including 134.49 resistance in USD/JPY, 142.92 resistance in EUR/JPY and 162.32 resistance in GBP/JPY. As long as these levels hold, more downside is still expected in these crosses ahead. However, firm break of these levels together will argue that Yen is under some persistent selling pressure. 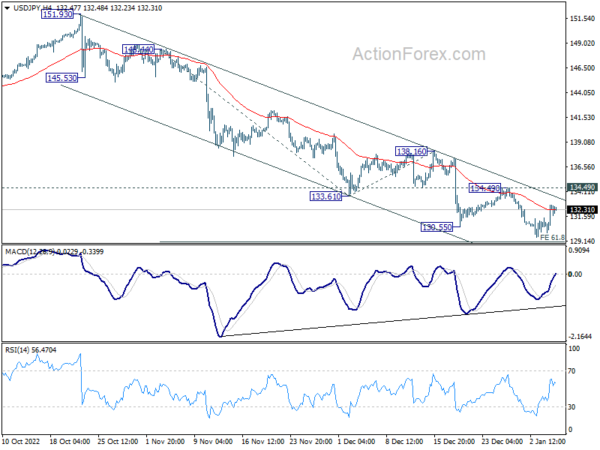 In the minutes of the December FOMC meeting, the participants agreed that inflation was “unacceptably high”. They “concurred” that inflation data showed “welcome reductions in the monthly pace of price increases”, but “stressed that it would take substantially more evidence of progress to be confident that inflation was on a sustained downward path.”

Also, participants noted that risk to inflation outlook remained “tilted to the upside”, with possibility of “more persistent than anticipate” price pressures. Meanwhile, risks to economic activity outlook were “weighted to the downside”.

Participants continued to anticipate that “ongoing increases in the target range for the federal funds rate would be appropriate”. “No participant” anticipated that it’s appropriate to start lowering rates in 2023. They generally observed that a “restrictive policy stance would need to be maintained” for some time. Also, “several participants commented that historical experience cautioned against prematurely loosening monetary policy.”

China Caixin PMI Services rose from 46.7 to 48.0 in December, above expectation of 47.5. PMI Composite rose from 47.0 to 48.3, pointing to contraction in business activity for the fourth straight month.

Wang Zhe, Senior Economist at Caixin Insight Group said: “Both manufacturing and services sectors’ supply and demand contracted due to the pandemic, with manufacturing demand taking a harder hit than in November. Overseas demand was weak, employment remained sluggish, but inflationary pressure was modest, and optimism among businesses significantly improved.

“Covid outbreaks rapidly spread across China in November, causing a number of macroeconomic indicators to fall sharply. On Dec. 7, China announced 10 new measures to further optimize Covid containment. In the short term, infections are expected to explode, which will disrupt production and everyday life. How to effectively coordinate Covid controls with economic and social development has once again become a crucial question.”

Intraday bias in GBP/JPY is turned neutral first with current recovery. Further decline is still expected as long as 162.32 resistance holds. Break of 155.33 will resume the fall from 172.11 to 153.70 fibonacci level. Nevertheless, considering bullish convergence condition in 4 hour MACD, firm break of 162.32 will argue that such decline has completed, and turn bias back to the upside for 55 day EMA (now at 163.71) and above. 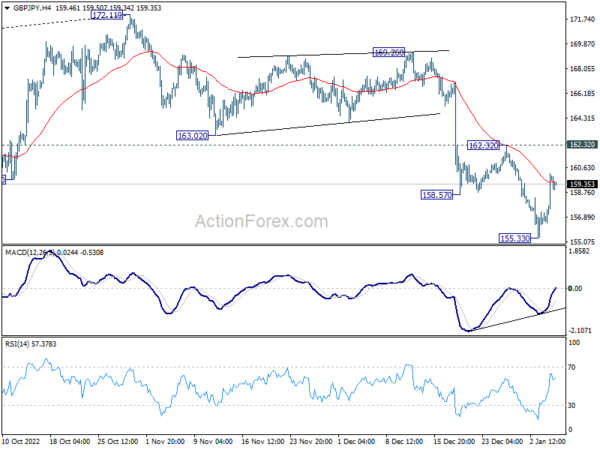 In the bigger picture, a medium term top was in place at 172.11 on on bearish divergence condition in weekly MACD. Decline from there should target 38.2% retracement of 123.94 to 172.11 at 153.70. Sustained break there will raise the change of trend reversal and target 61.8% retracement at 142.34. Nevertheless, break of 153.02 support turned resistance will argue that the decline has completed, and retain medium term bullishness. 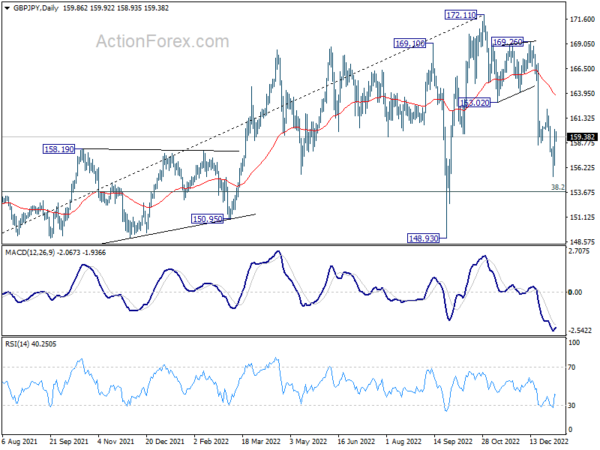