Euro opens the week higher as support by hawkish comments from ECB officials over the weekend. Overall, it’s more likely for ECB to deliver at two more 50bps hike before slowing down, despite some market speculations. Dollar and Yen turned softer again. Trading is subdued, nevertheless, with many Asian markets closed on Lunar New Year Holiday.

Technically, GBP/CHF’s rise from 1.1094 is making progress as expected, and further rally should be seen as long as 1.2181 support holds. Current upside momentum doesn’t warrant a range break out yet. That is, there might be resistance below 1.1543/1574 zone, to bring one more falling leg, to complete a five-wave triangle pattern. Let’s see if that’s the case, or GBP/CHF would just shoot through the roof. 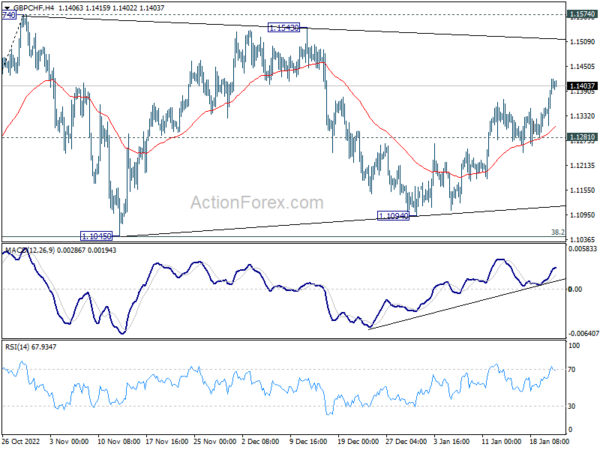 ECB Knot: Expect 50bps in Feb and Mar, and more in May and June

ECB Governing Council member Klaas Knot said in a WNL interview, “expect us to raise rates by 0.5% in February and March and expect us to not be done by then and that more steps will follow in May and June.”

“In the December data, we saw a first decline in headline inflation, but that was entirely due to base effects and lower energy inflation,” Knot said. “We focus on core inflation where, unfortunately, there is no good news. Because it is still on the rise. Underlying inflationary pressures show no signs of abating yet.”

In a separate interview with La Stampa, Knot said, “At some point, of course, the risks surrounding the inflation outlook will become more balanced… That would also be a time in which we could make a further step down from 50 to 25 basis points, for instance. But we are still far away from that.”

ECB Rehn: There are grounds for significant increases in interest rates

ECB Governing Council member Olli Rehn said “there are grounds for significant increases” in the key interest rate in the winter and early spring.

Rehn declined to estimate the terminal rate. “It’s certain that the rate hikes that we’ve already made and the forward guidance on upcoming hikes have the effect that markets are pricing in a lot of it into the Euribor rates,” he said.

“Many members noted that there was a distortion in the price formation of 10-year bonds, and that the functioning of bond markets had deteriorated, particularly in terms of relative relationships among interest rates of bonds with different maturities and arbitrage relationships between spot and futures markets,” the minutes said”.

“Members concurred that, with regard to the conduct of yield curve control, the measure to expand the range of 10-year JGB yield fluctuations to between around plus and minus 0.5 percentage points from the target level, while significantly increasing the amount of JGB purchases, was appropriate.”

Meanwhile, government representatives requested to adjourn the meeting after the discussions. They’re probably surprised by the agreed adjustment to YCC. The meeting was adjourned from 10:51 a.m. to 11:28 a.m. before concluding at 11:54 a.m.

BoC rate decision is a major focus of the week. The central bank has already indicated it will be “considering whether the policy interest rate needs to rise further” after December’s 50bps hike. Yet, with inflation still high at 6.3% in December, the markets are expecting BoC to deliver one more hike, by 25bps, to bring policy rate to 4.50%. The majority expects a pause afterwards, but that’s not a clear consensus. So, most attention will be on the guidance on whether next would be a pause.

In terms of central bank activities, BoJ will publish minutes of December meeting, when it doubled the 10-year JGB yield cap to 0.50%. Summary of Opinions at the January meeting will also be released. Main focus is on the discussions around lifting the cap, and then holding it at subsequent meetings, the views on yield curve distortion, and hints on any change in the yield curve control ahead.

The economic data schedule is also extremely busy with PMIs from Australia, Japan, Eurozone, UK and US. CPI data from Australia and New Zealand will be featured, with US PCE inflation, and Japan Tokyo CPI. The US will also release Q4 GDP advance. Here are some highlights for the week: 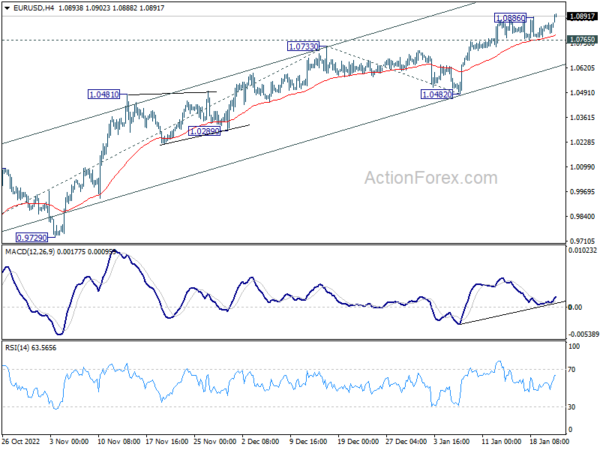 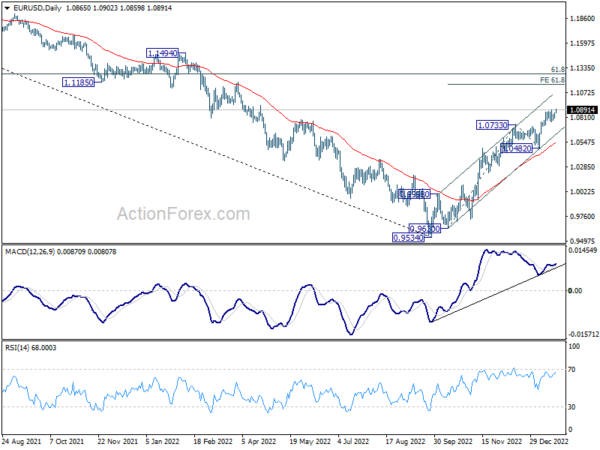