Dollar suffers some fresh selling in early US session after weaker than expected inflation data. Headline CPI rose 0.4% mom, 2.2% yoy in November inline with consensus. However, core CPI rose just 0.1% mom, 1.7% yoy , below expectation of 0.2% mom, 1.8% yoy. The greenback will now look into FOMC rate decision and statement for the needed fuel to extend recent rebound. Elsewhere in the currency markets, Sterling is trading as the best performing one today in spite of disappointing job data. Meanwhile Swiss Franc is trading as the weakest one, followed by Euro.

Democrat Doug Jones’ win in the Alabama Senate race is seen as a factor capping Dollar’s gain too. That reduces Republicans already slim majority in the Senate from 52 to 51. Republicans are dashing on reconciliation of the House and Senate versions and come up for a vote before Christmas. Jones is expected to be sworn in later this month in early January. Some Republican leaders said they expect to get the tax bill approved before Jones takes office. Jones’ win could be seen as giving the Republican an extra push to speed things up.

But from a medium term perspective, Republican’s loss in a deep conservative state is a big rebuke to President Donald Trump. That’s a state Trump won by 28% a year ago. With Republican president, Senate and House majority, the party haven’t done much this year. Tax bill is the only one they have hope for. And now, Democrats have only two seat net to work on in next year’s elections. It could be even harder for the Trump lead the Congress to fulfil his own election promises then.

Fed to hike, eyes on voting and projections

Fed is widely expected to raise federal funds rate by 25bps to 1.25-1.50% today. There is little doubt about that. Janet Yellen will deliver her last press conference as Fed chair, before Jerome Powell takes over the job next year. The surprise elements could be found in the voting and the new projections. Minneapolis Fed President Neel Kashkari, who dissented the prior hikes, would very likely dissent again. Chicago Fed President Charles Evans could be another dissenter. The vote split could be seen as hawkish if only Kashkari dissents. However, three or more dissenting will signals spreading of the worries on slow inflations among policymakers. And that would be dovish. Fed will mostly upgrade GDP forecast for 2018 and 2019 while lower unemployment rate estimates. The keys will lie in the changes in inflation projections and interest rate projections. So far, hawks inside the FOMC are still expecting three more rate hikes next year.

EU Barnier: No going back on Brexit agreements

EU leaders are expected to formally endorse the "sufficient progress" made in Brexit negotiations later this week, paving the way to start of trade talks, probably in March. EU Brexit negotiator Michel Barnier warned today that "we will not accept any going back on this joint report." He emphasized that "this progress has been agreed and will be rapidly translated into a withdrawal accord that is legally binding in all three areas and on some others that remain to be negotiated." This is in response to comments from UK Brexit Secretary David Davis, which tried to undermine the agreement as a "statement of intent" only.

UK claimant count rose 5.9k in November, above expectation of 0.4k. Unemployment rate was unchanged at 4.3% in October, above expectation of 4.2%. Average weekly earnings growth, though, accelerated to 2.5% 3moy, in line with consensus. From Eurozone, industrial production rose 0.2% mom in October, employment grew 0.4% qoq in Q3. German CPI was finalized at 1.8% yoy in November.

Stories of North Korea tension have slipped down the order recently. Nonetheless, it remains a threat to the region. North Korea leader Kim Jong Un said earlier this week that they’re going to manufacturing "more latest weapons and equipment" to "bolster up the nuclear force in quality and quantity". US Secretary of State Rex Tillerson offered talks to North Korea in a speech and said "let’s just meet". United Nations political affairs chief Jeffrey Feltman also said that "we have left the door ajar" after visiting North Korea last week. However, it’s unknown if Tillerson gets full support from the White House, as it just issued a short statement that "The president’s views on North Korea have not changed … North Korea is acting in an unsafe way … North Korea’s actions are not good for anyone and certainly not good for North Korea."

Australia consumer confidence improved, but not enough for RBA hike in 2018

Australia Westpac consumer confidence rose solidly by 3.6% in December. According to Westpac, that’s a "surprisingly strong result" that appears to be boosted by "less threatening outlook for interest rates". Nonetheless, while expectation for an RBA hike in 2018 cooled, Westpac "doubt whether this welcome lift to confidence will be sufficient to see the Bank achieve its ambitious growth forecast in 2018 of 3.25%." And, with inflation projected to be below target in 2018, and a cooling Sydney property market, Westpac maintained the view that RBA will stand pat through 2018. 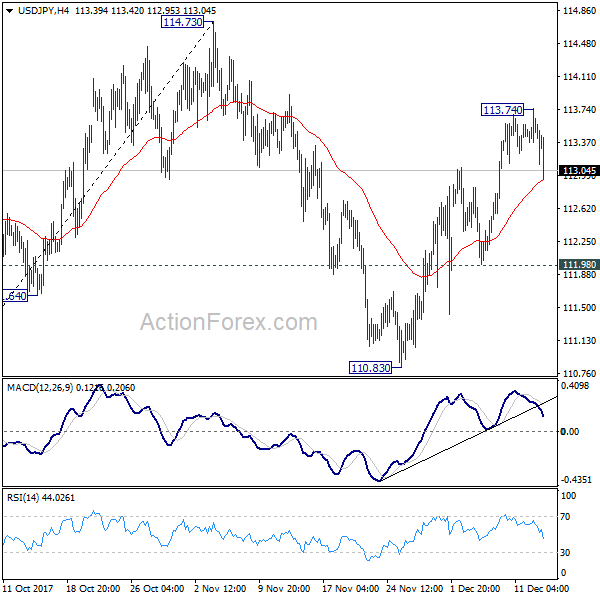 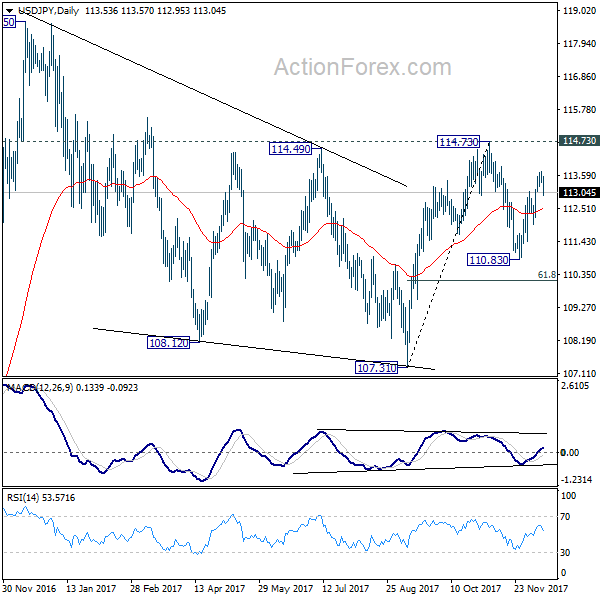