Dollar tumbles broadly in Asian session while the Japanese yen surges. Nikkei also trade deeply in red and is down -1.4%, below 19000 handle, at the time of writing. These developments are seen as markets’ reactions to US president Donald Trump’s failure in pushing through his health care act. Some analysts noted that markets are generally getting more cautious as the failure exposed Trump’s on his limits. Meanwhile, Trump tweeted on Sunday saying that the Democrats were "smiling" with the help of conservative Republicans. That won’t likely help him gain more support in the House. With a light quarter-end week ahead, movements in the markets could be exaggerated. It would take some time for the markets to readjust their expectations on US before committing to a stance.

BoJ opinions: monetary policy based on Japan, not overseas

In Japan, BoJ released summary of opinions from the March 15/16 policy meeting. The document noted that "some market participants argue that the Bank needs to change the monetary policy in response to the rise in the long-term yields overseas." But, majority believed that "monetary policy in Japan should be decided based on Japan’s economic activity and prices". Therefore, "it will be a considerable length of time before the Bank will need to change its monetary policy." At the meeting, BoJ held interest rate unchanged at -0.1%. And under the Yield Curve Control framework, BoJ target to guide 10 year yield at around 0%. The annual target of asset purchase was held at JPY 80T.

UK Prime Minister Theresa May is set to trigger the Article 50 for Brexit negotiation on Wednesday. Ahead of that, May will travel to Scotland for a meeting with its First Minister Nicola Sturgeon. The meeting is highly anticipated after recent verbal exchanges between May and Sturgeon. Sturgeon called for a fresh independence referendum but May insisted that would only take place until Brexit in completed in early 2019. Sturgeon called for a "face-to-face" debate on the topic with May, at one point.

A joint committee of ministers from OPEC and non-OPEC countries "expressed its satisfaction with the progress made towards full conformity with the voluntary production adjustments and encouraged all participating countries to press on towards 100 percent conformity." There were reports that the committee recommended a six month extension on production cut in the draft statement. But in the final version, the committee only said that "review the oil market conditions and revert… in April, 2017 regarding the extension of the voluntary production adjustments". Kuwaiti Oil Minister Essam al-Marzouq said that "unless we have conformity with everybody, we cannot go ahead with the extension of the deal."

A light week ahead

The economic calendar is relatively light this week. German Ifo, US consumer confidence; might trigger some volatility in the markets in the early part of the week. Meanwhile, main focuses are on Friday with China PMIs, Japan CPI, Eurozone CPI and US PCE featured. Here are some highlights of the week ahead.

In the bigger picture, USD/CHF is staying in medium term sideway pattern between 0.9443/1.0342. In any case, decisive break of 1.0342 resistance is needed to confirm underlying strength. Otherwise, we’ll stay neutral in the pair first. In case of deeper fall, we’d expect strong support from 0.9443/9548 support zone. 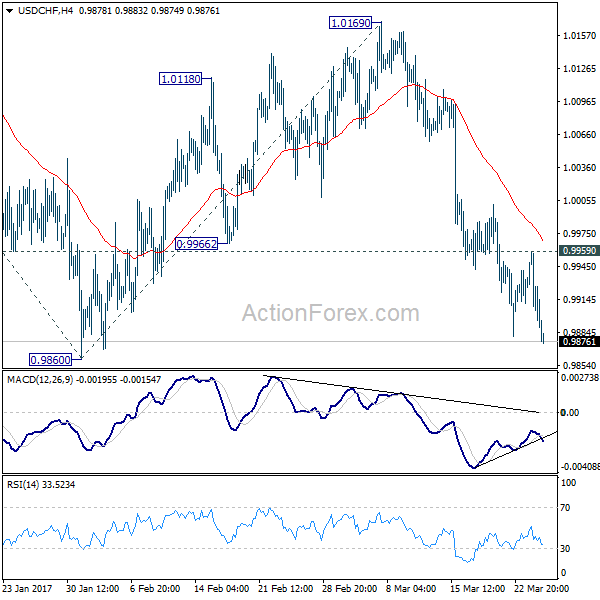 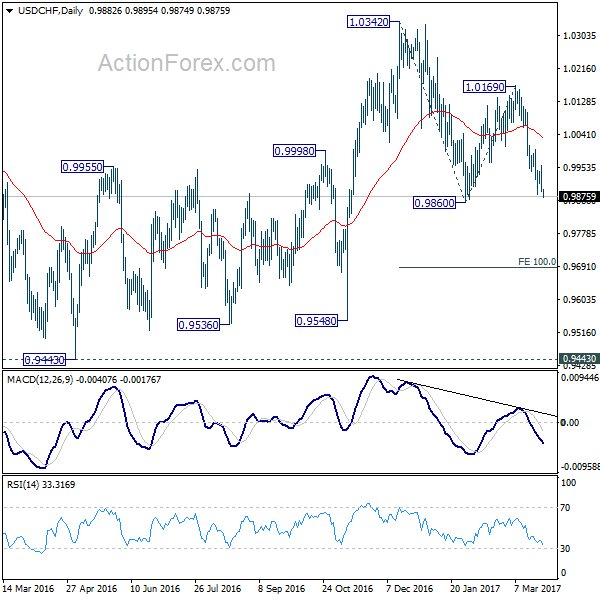