Dollar strengthens mildly in early US session after some solid economic data. But gain for the greenback is so far limited. While Dollar follow Yen as the second strongest major currency for today, it’s still down again all but Aussie and Loonie for the week. US President Donald Trump confirmed the appointment of Larry Kudlow as top White House economic adviser, replacing Gary Cohn who left last week. But there is generally expected and priced in. The Swiss Franc also showed little reaction to the dovish rate announcement of SNB. Markets eyes are staying on how the theme of trade war develops.

SNB left sight deposit rates unchanged at -0.75%, three-month Libor range at -1.25% to -0.25%, as widely expected. Inflation forecasts for 2018 and 2019 are lowered due to Swiss Franc’s appreciation to Dollar. SNB maintained that negative rate and intervention are essential . On the inflation outlook, SNB revised lower the forecast to 0.6% for this year, down from 0.7% projected in the previous quarter. It also revised lower the inflation forecast to 0.9% for 2019, down from 1.1% projected previously. The central bank introduced its inflation forecast for 2020 which is expected to reach 1.9%. On GDP growth, SNB attributed the country’s 4Q17 growth, at 2.4% annualized, to strong manufacturing activities. It maintained the GDP growth forecast for 2018 at 2%

More in SNB Warned Of Franc Appreciation Against US Dollar, Kept Commitment To Intervene

SNB chairman Thomas Jordan warned of US protectionism in a radio interview today. He said “the risks have not materialized yet, but if international trade doesn’t function well, that is damaging for everyone.” And, “safe havens are sought when there are political uncertainties or big changes in the financial markets. This can be triggered by protectionism,”

More economists are paring back their expectation of an RBA hike this year. Macquarie Bank now no longer sees RBA hiking within 2018. it noted in a report that “the primary reason for pushing back our RBA call is that the Bank can err on the side of growing the economy faster for longer to erode spare capacity and have confidence that inflation is firmly moving back into the 2-3% target.” .

It referred to other advanced economies for the pattern of falling unemployment rates without wage growth. At this same time, “Australia’s unemployment rate remains at 5.5% and noticeably above ‘full employment’.” Also, “after two years of below-target inflation, and at least another one to come, there seems little danger of generating a meaningful pick-up in inflation expectations from keeping interest rates low for longer.”

Besides, “housing has settled”, and “investor activity in the housing market has subsided significantly and housing prices have broadly flattened out. There is “little danger” or “reacceleration in housing price or credit growth.” And therefore, “the source of much angst for the RBA – fast growth in housing prices in Sydney and Melbourne – has eased.”

NAB recently pushed back their RBA rate expectation too and predicted only one hike this year, not two. Westpac continued to expect no hike until 2019.

USD/CHF recovers mildly as it’s trying to draw support from 4 hour 55 EMA. But it’s limited well below 0.9533 temporary top so far. Intraday bias remains neutral. Again, further rise is in favor as long as 0.9356 support holds. Break of 0.9533 will resume the rebound from 0.9186 and target 0.9626 fibonacci level. However, on the downside, break of 0.9356 will indicate that the rebound has completed. In such case, intraday bias will be turned back to the downside for retesting 0.9186 low. 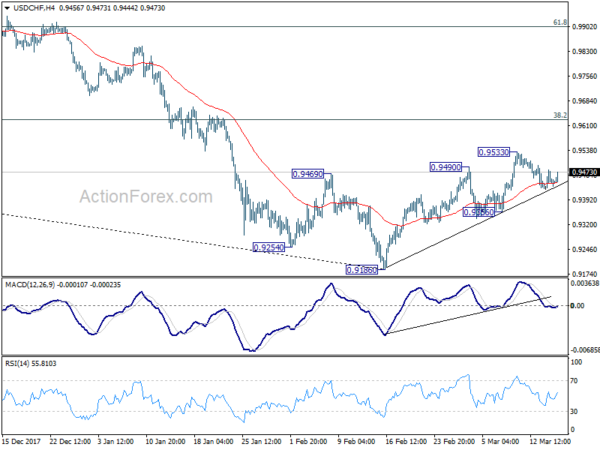 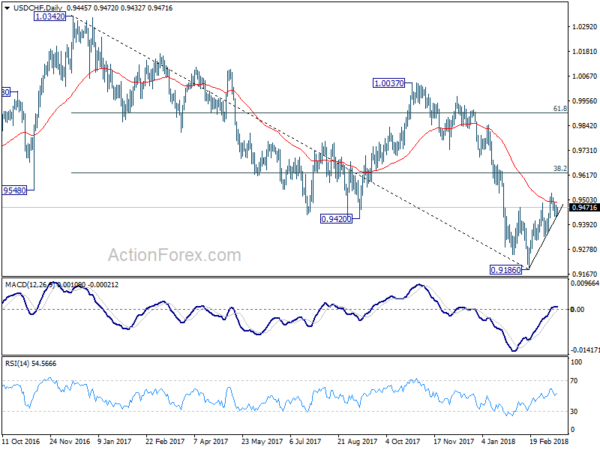