Movements in the forex markets are very limited today. Sterling dips mildly after PMI manufacturing missed expectation. Euro stays soft in general even though comments from policy makers should be Euro supportive. Aussie weakened earlier in the day on retail sales disappointment but no follow through selling is seen so far. Yen stays in tight range after uninspiring release of Tankan survey. Dollar on the other hand, trades mixed as markets await ISM indices and employment data later in the week, as well as FOMC minutes. In other markets, Gold continues to struggle in tight range around 1250. WTI crude oil is staying firm above 50 handle but can’t extend gains so far.

ECB chief economist Peter Praet said in an interview that policy makers are "more confident that the economic expansion will continue to firm and broaden." However, "underlying inflation, which is an indicator of price stability over the medium term, remains subdued." And, could inflation head back to target without the current "expansionary monetary policy"? Praet’s answer was "no". Nonetheless, the "probability" for additional stimulus "has reduced considerably". On the other hand, ECB executive board member Benoit Coeure said today that "the financial sector and the economy and states should prepare for an environment of higher rates." And he warned again that "negative rates were very effective but they shouldn’t go on for too long as that penalizes the banking sector".

UK PMI manufacturing dropped to 54.2 in March, down from 54.6, below expectation of 55.0. That’s the third straight decline in a row. Markit noted that "UK manufacturers continued to benefit from solid inflows of new business". And, "part of the increase in new orders reflected further growth of foreign demand." However, "high costs and weak wage growth are sapping the strength of consumers, with rates of expansion in output and new orders for these (consumer) products slowing further." Overall, "the outlook for the sector also remained positive, with business optimism rising to a ten-month high."

Japan Business Sentiment Improved in First Quarter, but Outlook Not as Bright

Japan released its quarterly Tankan survey earlier today. The large manufacturer DI improved to 12 in 1Q17, from 10 in the prior quarter. However, this missed expectations of a bigger improvement to 14. The large non-manufacturer DI rose to 20, compared with consensus of 19% and 4Q16’s 18, mainly driven by higher confidence in services and construction sectors. Note the pickup in sentiment was modest given the depreciation in Japanese yen (USDJPY rallied) during the period. For SMEs, the manufacturer DI added 4 points to 5 while the non-manufacturer DI doubled to 4, during the period. The DI for all industry and all firms gained 3 points to 10.

Corporate confidence over the coming 3 months, however, deteriorated. The large manufacturer expectations DI was +11 while that for non-manufacturers was 16. The former marked an improvement from the previous reading but signaled deterioration from the current conditions. The expectations DI for all firms, at +4, also dropped -5 points from the current conditions DI. On the capex plan outlook, large companies projected a 0.6% yoy increase for FY17, compared with a -0.9% contracted for the same period last year, suggesting that the sentiment in large companies has improved this year. BOJ’s USDJPY assumption for large manufacturers came in at 108.43, up from 104.9 for FY16 in 4Q16 survey. USDJPY currently is trading around 111.

RBA rate decision is a main focus tomorrow and the central bank is widely expected to keep interest rate unchanged at 1.50%. There is little prospect of a rate cut this year as housing markets heat up again in recent months. Little new information would be given from this week’s meeting as RBA would wait for the set of Q1 data to be released later before adjusting economic outlook. But for the moment, some notable weakness is seen in Aussie broadly.

With 1.0739 minor resistance intact, intraday bias in EUR/USD remains on the downside for 1.0494 support. We’re holding on to the view that corrective rise from 1.0339 is completed at 1.0905. And, larger down trend is probably resuming. Break of 1.0494 should confirm this bearish case and target 1.0339 low and below. Break of 1.0339 will target parity next. On the upside, above 1.0739 minor resistance will delay the bearish case and turn focus back to 1.0905 resistance instead. 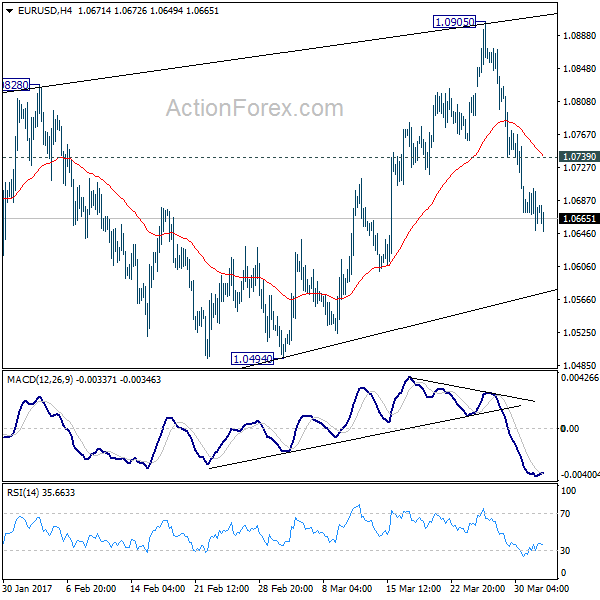 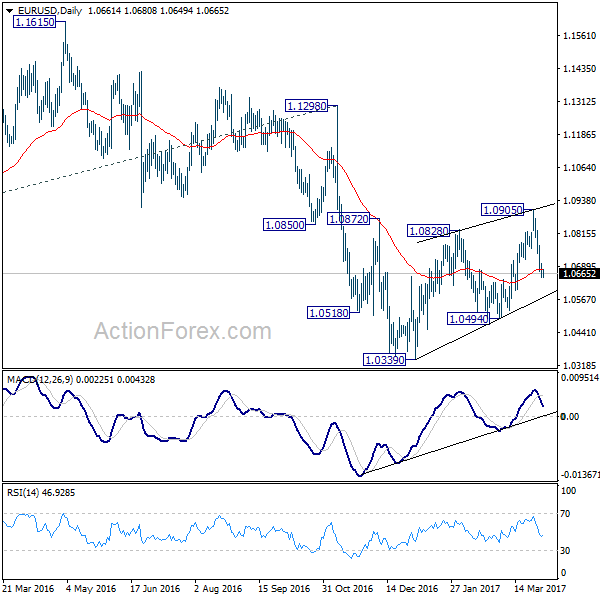