The tones in the financial markets remain unchanged for the week. US equities attempted for a rally overnight. DJIA surged initially on strong US ADP employment and reached as high as 20887.50. But the index then reversed to close down -0.20%, or -41.09 pts, at 20648.15. The hawkish FOMC minutes are seen as a factor weighing on sentiments. But more importantly, House speaker Paul Ryan’s comments on tax reform further reduced market confidence on US President Donald Trump’s ability to implement what he promised. 10 year yield closed mildly higher by -0.007 at 2.357 but it’s kept in tight range well below 55 day EMA. In the currency markets, Japanese yen strengthens again on risk aversion is remains the strongest major currency for the week. Commodity currencies are suffering renewed selling in Asian session. Dollar and Euro are trading mixed.

The minutes of the March FOMC meeting was overall hawkish. They outlined the steps to shrink the USD 4.5T balance sheet. The minutes noted that the reduction has to be "gradual and predictable", accomplished by "phasing out" or reinvestment and such process could start "later this year". No detail is provided yet but the minutes said Fed will "its deliberations on reinvestment policy during upcoming meetings and would release additional information as it becomes available." Meanwhile, some officials are concerned that if unemployment falls further, it could pose "significant upside risk" of inflation. The minutes also showed "some participants viewed equity prices as quite high relative to standard valuation measures."

The two day meeting of US President Donald Trump and China President Xi Jinping will start today. It’s a closely watched event but we’re not anticipating anything substantial to the markets coming out of the meeting. Again, we’d like to emphasize that direction stocks, yields, and Dollar will be heavily dependent on the confidence on Trump to deliver his election promises on fiscal policies. Such confidence was hurt much after the health care act flop. Now that hope is turned to tax reforms, House speaker Paul Ryan said yesterday that tax reform will take longer to accomplish than the health care act. He noted that "the House has a (tax reform) plan but the Senate doesn’t quite have one yet. They’re working on one. The White House hasn’t nailed it down." And, "so even the three entities aren’t on the same page yet on tax reform."

BoE policy maker Gertjan Vliegh warned that "a rate hike that turns out to be premature is a more serious mistake than one that turns out to be somewhat late." He explained that if "inflationary pressures are spreading beyond just exchange-rate pass-through", or there is "re-acceleration of indicators related to household spending and credit", then higher interest rate is warranted. But for now, "caution is warranted." Sterling has been resilient since Kristin Forbes voted for a rate hike last month. And it remains supported in spite of Brexit news since then.

Talking about Brexit, the European Parliament voted 516-133, with 50 abstentions, for the phased approach of Brexit negotiation, rather than parallel. European Union chief negotiator Michel Barnier said yesterday that "parallel talks" on Brexit terms and future trade relationship is "a very risky approach". And, he emphasized that to succeed, "we need on the contrary to devote the first phase of negotiations exclusively to reaching an agreement on the principles of the exit."

In Japan, it’s reported that BoJ Governor Haruhiko Kuroda is Prime Minister Shinzo Abe’s favorite for the job. And Kuroda will likely renew for another five year term next year. Reuters quoted unnamed source saying that Abe trusts Kuroda and believed he did a "very good job". Also, the it’s believed that Abe’s administration is happy with impact of BoJ’s QQE program that keep government borrowing costs very low. The selection process for the next BoJ Governor will start in the second half of this year.

Separately, a former BoJ official Kazuo Momma said that the central bank will likely revise down inflation forecast soon, possibly as early as during the quarterly review this month. Momma noted that the BoJ’s price forecasts are "too optimistic". Meanwhile, it’s "hard to raise interest rates when you’re cutting your inflation forecasts." Momma expects core inflation hover around 0.5% in the current fiscal year, and jump to 1.0% next. That’s sharply lower than BoJ’s expectation of core inflation hitting 1.5% by the end of fiscal 2017 and 1.7% by the end of fiscal 2018. 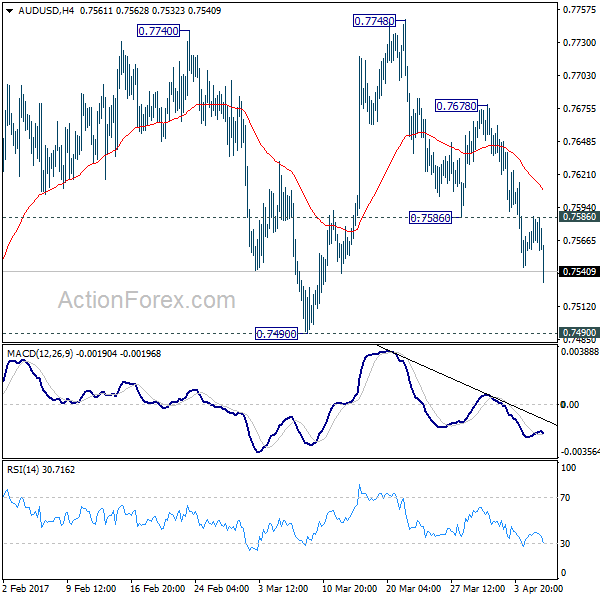 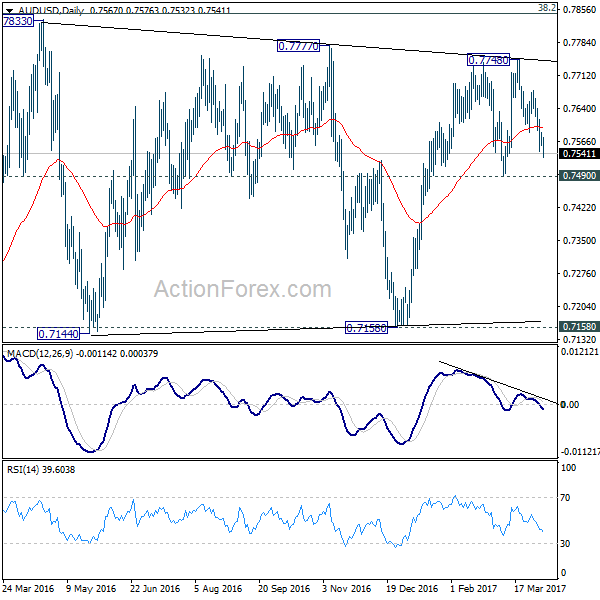