Dollar’s broad based rally extends today with the support of surging US treasury yield. 10 year yield hit as high as 2.99% in premarket, and is flirting with 3% level. Meanwhile, Japanese yen are trading as the weakest one. Euro suffered some selling earlier today after mixed PMI data. In particular, EUR/CHF’s rejection from 1.2 key level become clearer. But selloff Euro is overwhelmed by weakness in Yen, Aussie and Kiwi. Movement in US yields will remain the main focus in US session as US PMIs and existing home sales are the only feature in the calendar.

Technically, GBP/USD and AUD/USD have taken key near term support at 1.3965 and 0.7642 respectively, mentioned in our daily report. Both developments indicate more upside in the greenback. The focus will now shift to 108.12/48 resistance zone in USD/JPY, 1.2814 in USD/CAD and 1.2214 support in EUR/USD. Break of these levels will further solidify the momentum for Dollar’s rally.

Eurozone PMIs: Growth has downshifted markedly since the peak at the start of the year

Eurozone PMI manufacturing dropped to 56.0 in April, down from 56.6, miss expectation of 56.1. Eurozone PMI services rose to 55.0, up from 54.9 and beat expectation of 54.6. PMI composite unchanged at 55.2. Chris Williamson, Markit Chief Business Economist, noted that ” growth has downshifted markedly since the peak at the start of the year, but importantly still remains robust.” April’s data is consistent with 0.6% at the start of Q2.

France PMI manufacturing dropped to 53.4 in April, down from 53.7 and missed expectation of 53.5. France PMI services rose to 57.4, up from 56.9, beat expectation of 56.5. PMI composite rose to 56.9, up from 56.3. Markit noted that “the French private sector remained firmly in expansionary mode according to latest flash data.”

Mexico agreed bilateral trade deal with EU, still working with Canada and US on NAFTA

In a joint statement published on Saturday, EU and Mexico had “reached an agreement in principle” on trade and investment between the two entity, as part of the modernisation of the bilateral legal framework. European Commission President Jean-Claude Juncker, welcomed the news saying: “With this agreement, Mexico joins Canada, Japan and Singapore in the growing list of partners willing to work with the EU in defending open, fair and rules-based trade.”

Separately, Mexico is still working on NAFTA renegotiation with Canada and US. Mexican Central Bank Governor Alejandro Diaz de Leon  expressed his optimism that “in the baseline scenario of the central bank, we have that there will be a version of NAFTA.” He added that “we know that there have been ups and downs in the negotiation … (But) we do hope that the advantages for the three countries will prevail in some version of the agreement.” Senior officials from the three countries will meet again in Washington to push for a deal within a couple of weeks.

San Francisco Fed President John Williams told Spanish newspaper El Pais that it’s too soon to tell if there will be a trade war. He pointed out “the reality is that it is not so serious as some headlines suggest”. However, Williams also warned that “if the conflict increases there will be less growth, more inflation and lower quality of life all over the world.”

Regarding central bank communications on stimulus exit, Williams said “it should be repeated until people have had enough of hearing the message.”

Japan PMI manufacturing rose to 53.3 in April, up from 53.1 but missed expectation of 53.4. Joe Hayes, Economist at IHS Markit, noted in the release that the survey data depicted a positive backdrop in the Japanese manufacturing sector during April. And the improvements in the headline number was “underpinned by stronger rates of growth in output, new orders and employment.” Business confidence also “strengthened”. On the other hand, new export orders dropped for the first time since August 2016 as “stronger yen begins to impact price competitiveness”. But rise in total new business inflows also indicated “stronger domestic demand”.

BoJ Kuroda: Inflation to meet target in fiscal 2019, but risks are skewed to the downside

BoJ Governor Haruhiko Kuroda repeated his usual rhetoric that the central bank “must continue very strong accommodative monetary policy for some time” in order to reach the 2% inflation target. He pointed out that “if you exclude energy items, then inflation rate is only about 0.5 percent.” And, there is “still a long way to go to achieve the 2 percent inflation target.” Kuroda is still expecting inflation to hit target in fiscal 2019 but “risks are skewed to the downside.”

AUD/USD drops to as low as 0.7633 so far today. Break of 0.7642 confirms resumption of whole decline from 0.8135. Intraday bias remains on the downside for 0.7500 key support level next. Break there will indicate medium term reversal. On the upside, above 0.7682 minor resistance will turn intraday bias neutral and bring consolidations. But recovery should be limited below 0.7812 resistance to bring fall resumption. 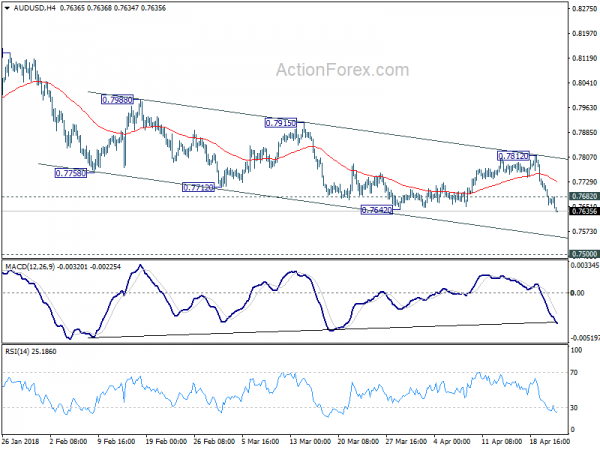 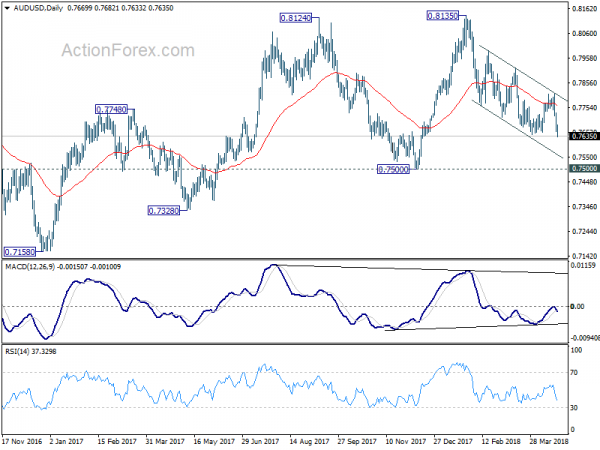