Euro recovers against Dollar after ECB president Mario Draghi tried to play down concerns over recent weak Eurozone data. But his usual cautiousness is so far capping Euro buying. On the other hand, Dollar’s rally also loses some steam, in particular against Yen as 10 year yield dips back below 3% handle. Despite upbeat job data from the US, the impact is offset by disappointing core durable goods orders too. Technically, the focus will stay on whether EUR/USD would break through 1.2154 key support to confirm medium term reversal, or it will break through 1.2244 minor resistance to indicate short term bottoming.

ECB left main refinancing rate unchanged at 0.00% as widely expected. Deposit facility rate is held at -0.40% and marginal lending facility rate at 0.25%. Also, the EUR 30B monthly asset purchase program will continue through end of September. Euro is lifted mildly following President Mario Draghi’s upbeat comments in the introductory statement. But no follow through buying is seen after his cautious remarks during the Q&A.

In particular, Draghi noted in the introductory statement that data since March “points towards some moderation” in growth. However, they are still “consistent with a solid and broad-based expansion of the euro area economy”. Also, Draghi added that “the underlying strength of the euro area economy continues to support our confidence that inflation will converge towards our inflation aim of below, but close to, 2% over the medium term.” But later, Draghi turned back into his cautious mode and said it’s important to determine if softer data temporary or permanent.

SNB reported CHF 6.8B loss in Q1 of 2018.That includes CHF 7.0B loss on currency positions and CHF 0.2B loss on gold holdings. The losses were partly offset by CHF 0.5B gain in Swiss Franc positions, mainly from negative interest rates. Current allocations in the foreign exchange reserves were largely unchanged. USD holdings was at 35%, GBP holding at 7%, JPY holdings at 8% and CAD holdings at 3%. EUR holdings, on the other hand, dropped 1% to 39%.

German Gfk consumer climate dropped to 10.8 in May, down 0.1 from 10.9, met expectations. GFK noted in the release that “the increasingly insecure state of geopolitics now also seems to be influencing the mood of consumers.” It pointed to “escalation of the Syrian crisis and the protectionist trade policies of the United States” that could affect Germany’s “previously excellent economic prospects.” Also, “increasing protectionism in international trade would hit Germany, as an export nation, resulting in employees fearing they may lose their jobs and again being more reluctant to buy.” 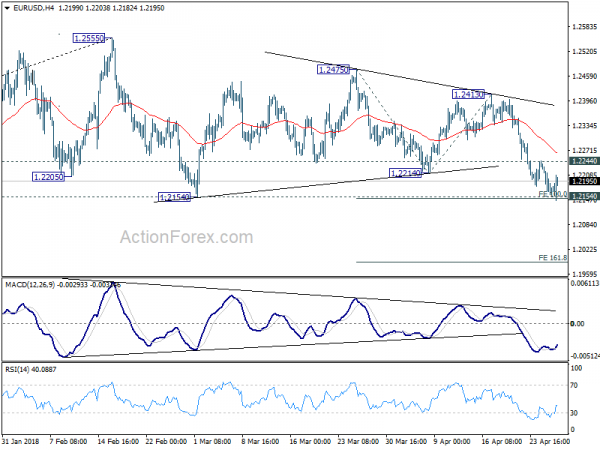 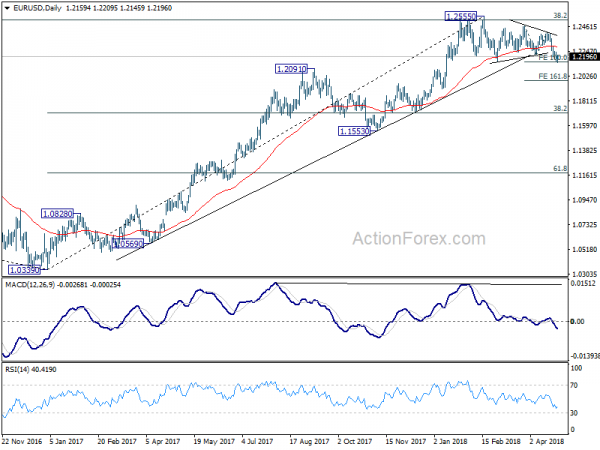