US, European and Asian Markets Reacted Differently to Start of US-China Trade War

The strength in in US stocks argued that investor might have priced in little impact to the economy from trade war with China. Or, they could have perceived the strength of the US economy to be strong enough to withstand the impacts. Data from the US were generally good last week as ISM manufacturing rose to 60.2 in June. ISM non-manufacturing rose to 29.1. Non-farm payroll rose more than expected by 213k. Unemployment rate rose to 4.0% but that was positive as participation rate rose from 62.7% to 62.9%. Wage growth at 0.2% mom was a miss but that would keep Fed on course with its rate path, without pushing it faster.

NASDAQ’s rebound and strong close on Friday firstly suggest strong support from 55 day EMA. Secondly, that in turn retained near term bullishness in the index. Focus will be back on 7806.60 resistance this week and break will pave the way to 8000 psychological level.

Another factor that support US stocks, as well as European stocks too, was the hope of a point of convergence in US-EU negotiation to avoid trade war on cars. It’s reported that Trump has offered to remove tariffs on, instead of raising it using section 232 national security as excuse, on EU car imports. That’s in condition that EU will also remove tariffs on US cars to the EU.

German Chancellor Angela Merkel also sounded supportive but she obviously had her own version. The EU is reported to be working on a “plurilateral agreement” to reduce tariffs to between largest car supplies including the US, South Korea and Japan. Such agreement could be struck without involving all of WTO members while avoid breaking the WTO rules. European Commission President Jean-Claude Juncker bring forward a proposal to the US later in the month. And such a position is likely the preferred one of EU officials for the time being. While there are still huge differences, there is at least some chance of an agreement.

Strong rebound in DAX also indicates short term bottoming at 12104.41. Initial focus is back on 12547.61 support turned resistance. Firm break there will indicate completion of fall from 13204.31 and bring stronger rebound back to this level. For now, at least, favor is to range trading between 11726.62 to 13596.89, rather than a medium term corrective down trend.

In Asian markets, that’s another story. The steep selloff in the Shanghai since the so-called trade negotiation with the US collapsed showed that the markets are pessimistic on the impact on the Chinese economy. Reactions in Nikkei, HSI and even Kospi showed there would be a certain extent of spillover to other Asian countries. China has attempted to find an alliance in EU against US protectionism but hit a wall. Since the G7 drama, the EU and Canada have repeatedly said they would work with “like-minded” partners on preserving the multilateral rules-based system but China is certainly not one of them. Though, the SSE is has dipped into key support zone of 2016 low at 2638.30 and 2700 psychological level. Chance for government intervention has increased notably, which could give Asian stocks some support. Let’s see.

In the currency markets, New Zealand Dollar ended broadly higher, as the strongest one for the week. But it’s more a technical rebound then anything, which is also reflect as it’s limited below prior week’s high against all others. Sterling was the second strongest one after a hat-trick of PMI upside surprise. BoE Governor Mark Carney’s speech also showed he’s confident that economy will develop as expected in recent inflation report. The chance of an August BoE rate hike is back on the table. Euro followed as the third strongest as supported by the above mentioned news on auto tariffs. Also, there were reports that some ECB officials were not happy as markets only priced in a full hike by December 2019, that’s too late.

On the other hand, Dollar ended as the weakest one as recent consolidation continued. There was practically no change in Fed rate path expectations. Fed funds futures are pricing in around 80% chance of a September hike and around 50% of another one in December. However, 10 year yield dipped lower as recent consolidations extended. Gold is trying to bottom around 1236. These two are factors dragging down the greenback. Swiss Franc and Yen followed as the second and third weakest ones.

Gold bottomed in near term, recovery to extend

GBP/USD’s rebound from 1.3048 extended higher to 1.3289 last week. The support from 4 hour 55 EMA argues that’s 1.3048 is a short term bottom and rebound from there would be stronger than originally expected. Initial bias is on the upside this week for 1.3314 resistance first. Break will target 1.3471 resistance next. We’ll expect strong resistance from 1.3471 to limit upside. On the downside, though, below 1.3200 minor support will turn bias to the downside for retesting 1.3048 low. 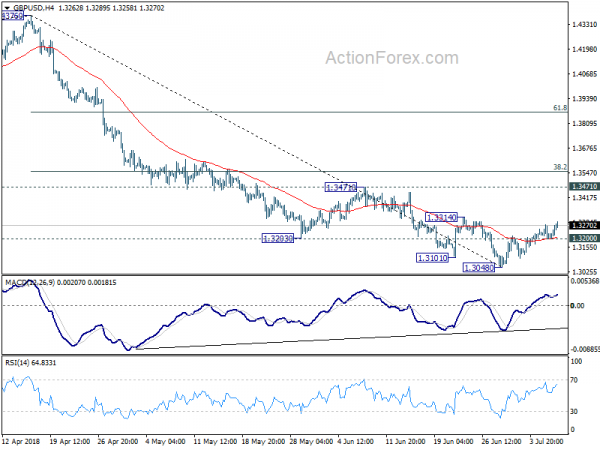 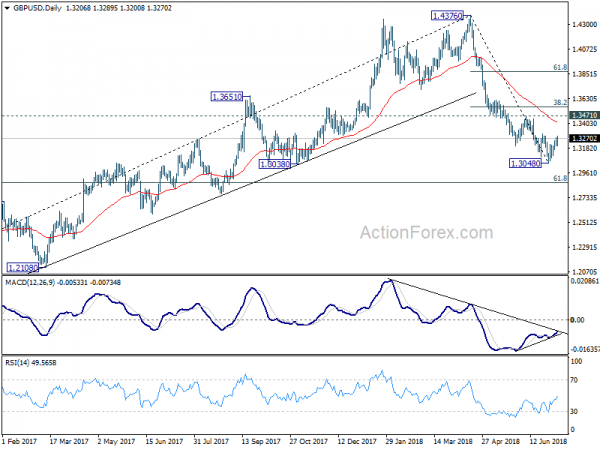 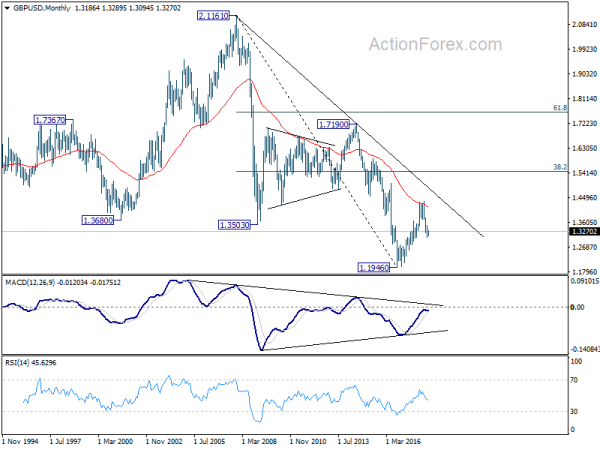 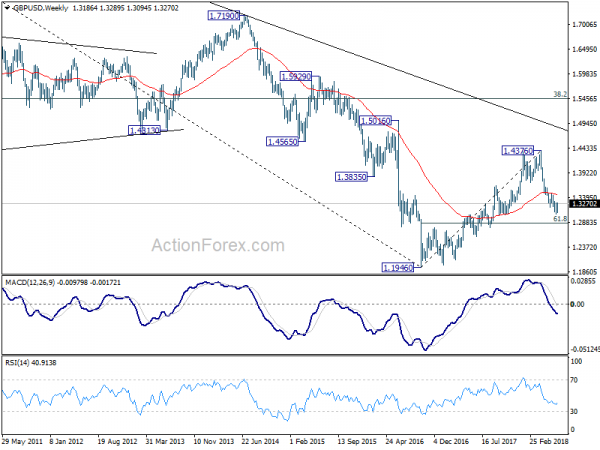