There are a couple of developments to note in the forex markets last week. Firstly, Dollar ended as the strongest major currencies as markets firmed up the expectation of a June hike by Fed. However, the greenback tumbled sharply against Euro and Swiss Franc before close after weaker than expected inflation data. The dollar index was rejected from 55 day EMA and closed lower at 99.19. That was also accompanied by steep decline in 10 year yield which closed at 2.335. Overall development suggests that the greenback would turn weaker against Euro again as the post French election pull back ends.

Dollar index’s rebound was limited at 99.88 last week, below 55 day EMA (now at 99.96). Subsequent sharp fall suggests that rebound from 99.54 has completed already. More importantly, the corrective pattern from 103.82 is likely not finished and deeper fall is now in favor through 98.54 in near term. However, we’d still expect strong support from 50% retracement of 91.91 to 103.82 at 97.86 to contain downside to resume the larger up trend at a later stage.

10 year yield edged higher to 2.423 last week but failed to sustain above 55 day EMA. The sharp decline from there argues rebound from 2.177 is completed and the fall from 2.615 is possibly resuming. Near term outlook is now turned bearish for 38.2% retracement of 1.336 to 2.621 at 2.130. We’d still anticipate, with lower confidence now, strong support from 2.130 to contain downside. But a break there would possibly extend the pull back to 50% retracement at 1.978 before completing the correction. Both developments argues that Dollar could turn weaker against Euro and Yen ahead.

Sterling to under perform Euro and Dollar on BoE

Secondly, Sterling weakened broadly, except versus Swiss Franc and New Zealand Dollar, after dovish BoE meeting. Markets should be paring bet on an early BoE rate hike. The central bank will likely hold their hands before clearing up the picture of Brexit negotiation with EU. GBP/USD will be looking at 1.2830 support this week while EUR/GBP will look at 0.8508 resistance. Break of these levels will trigger deeper selloff in the Pound and could drag down GBP/CHF and GBP/JPY too. 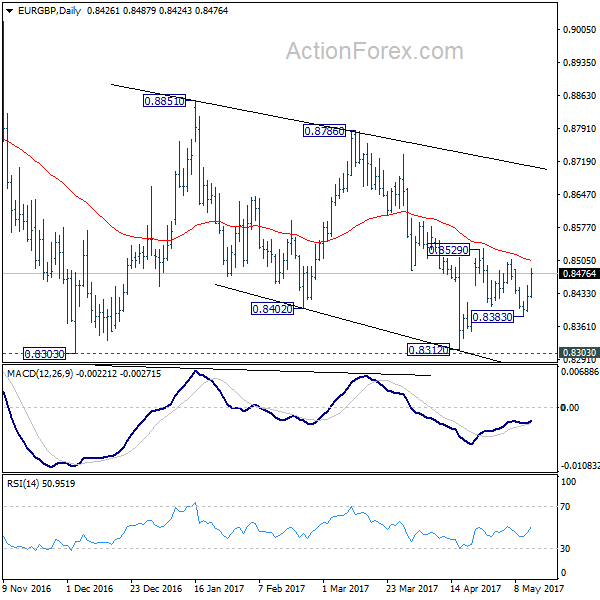 Thirdly, even though Canadian Dollar and Australia Dollar didn’t end the week too badly, the outlook remained bearish for both. In particular, WTI crude oil rebounded strongly last week after drawing support from 44.09 fibonacci level. However, Canadian Dollar had just little reaction to such rebound with USD/CAD staying in very tight range between 1.36/38. EUR/AUD consolidated for a while but the pull back was shallow. EUR/AUD could be set to resume recent rally through 1.49 this week.

Strong rebound in WTI crude oil indicates short term bottoming at 43.76 after breaching 38.2% retracement of 26.05 to 55.24 at 44.09. It’s a bit early to determinate whether the whole corrective fall from 55.24 is completed. But there is much prospect of at least at test on 55 day EMA (now at 49.69). However, the lack of reaction in USD/CAD argues that Canadian Dollar could be heading lower first before making a bottom.

EUR/AUD stayed in consolidation below 1.4909 last week and recent rebound lost momentum. But overall outlook is unchanged. That is, whole correction from 1.6587 has completed at 1.3624 already after defending 1.3671 key support level. Further rise is expected to next fibonacci level at 1.5455 after consolidation completes.

Initial bias in EUR/AUD remains neutral this week first. Consolidation from 1.4909 could extend and deeper retreat cannot be ruled out. But downside should be contained by 1.4442/4649 support to bring rise resumption. Above 1.4909 will extend recent rally from 1.3624 to next medium term fibonacci level at 1.5455. 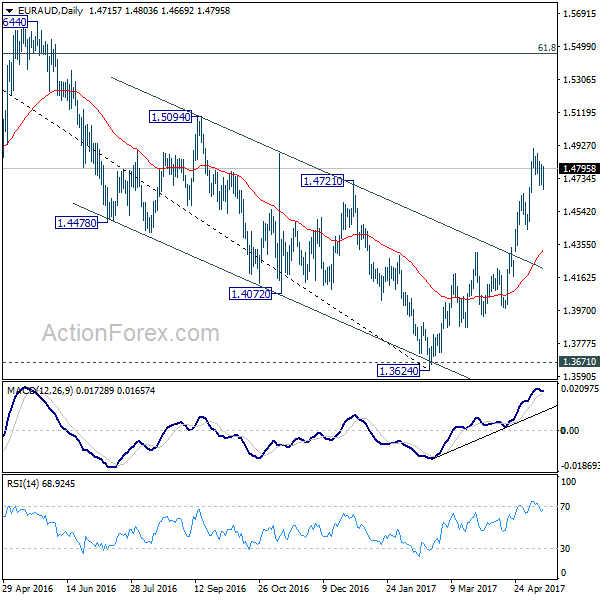 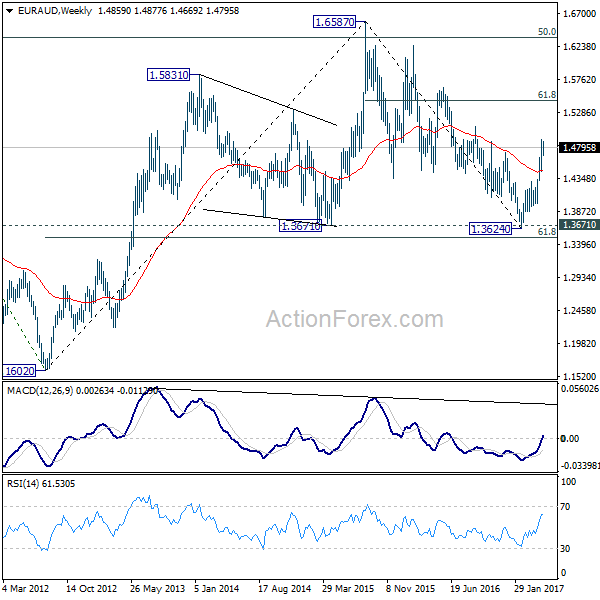 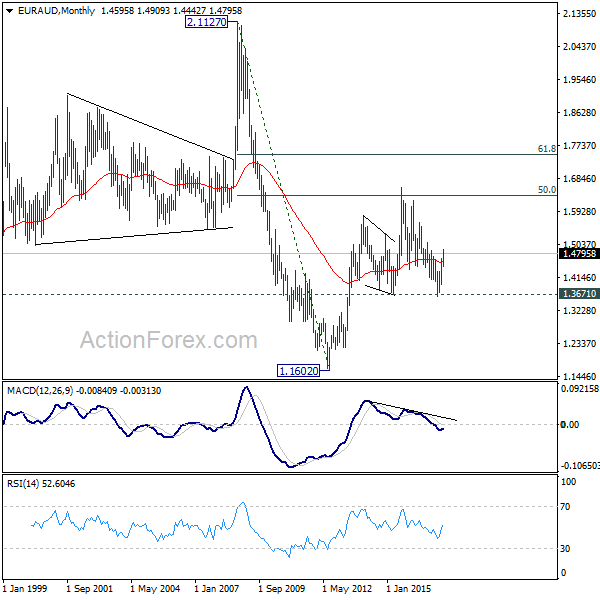