Yield treasury yield suffered sharp selloff on Friday. 30 year yield closed below 3.000 handle at 2.955, down -0.068. 10 year yield also lost -0.071 to close at 2.317 and carried near term bearish implications. Markets are getting increasing dissatisfied on the lack of progress from US president Donald Trump’s administration regarding fiscal stimulus. There was no detail on the so called "phenomenal" tax reform yet. Instead, Trump just continued his attack on media, intelligence agencies and other countries like China. There were talks that Trump could eventually deliver virtually no fiscal stimulus that has an impact of this year’s growth. All eyes will turn to his address to Congress on February 28. And reactions could be even more apparent if Trump fails to deliver anything concrete. Dollar also suffered and ended the week mixed.

10 year yield’s firm break of 55 day EMA and breach of 2.325 support last week dampened the triangle scenario. Instead, corrective move from 2.621 is now more likely to head lower to 38.2% retracement of 1.336 to 2.621 at 2.130 before completion. Such development would likely limit any rally attempt in the greenback.

Dollar index could dip through 99.23

Dollar index’s rally attempt last week already failed below 101.76 near term resistance. Focus is now back on 100.41 minor support. Break there would likely extend the corrective fall from 103.82 through 99.23. And in that case, such correction is likely of larger degree and would probably target 95.88 support before completion.

Yen, on the other hand, ended the week as the strongest major currency last week. Falling US yields was seen as a major factor. Risk aversion in Europe was another one. FTSE ended Friday down -27.67 pts or -0.38%, at 7243.70 after dipping to as low as 7192.45. DAX lost -143.8 pts, or -1.2% to close at 11804.03. CAC lost -46.05 pts, or -0.94%, to close at 4845.24. Investors were getting more concerned with political uncertainties with eyes on elections in France, the Netherlands and Germany. In particular, risk of Frexit would jump should far-right Marine Le Pen wind presidency. Euro and Swiss Franc ended the week as the weakest major currencies.

The sharp fall in DAX on Friday is rising the chance of near term reversal, on bearish divergence in daily MACD and RSI. A test on 55 day EMA (now at 11532.07) would likely be seen at least. But key level lies in 11479.78 support. Break there should confirm failure ahead of 12390.75 historical high and should turn near term outlook bearish for 108.27. Such development would likely drag EUR/JPY further lower.

Recapping the developments, there are downside risks in both US yield and European stocks. The uncertainty over French elections will not go away any time soon. And there are also risks that Trump would fail to deliver anything concrete. Hence, firstly, we’d expect some more upside in Yen in near term. Dollar, however, might have a mild upper against Euro due to resilience in US stocks. Thus, we’ll try to sell EUR/JPY at market this week, with a stop at 119.90. 114.88 is the target for a short term trade. But we could get out of EUR/JPY earlier, depending on the development.

In the bigger picture, price actions from 109.20 medium term bottom are seen as part of a medium term corrective pattern from 149.76. Current development argues that it’s completed at 124.08, ahead of 126.09 key resistance level. Deeper fall would be seen back to 109.20 low. Break there will extend the whole medium term down trend from 149.76 high.

In the long term picture, medium term decline from 149.76 is seen as part of a long term sideway pattern from 88.96. Decisive break of 126.09 will indicate that such decline is completed and EUR/JPY has started another medium term rally already. Before that, deeper fall is mildly in favor towards 94.11 low. 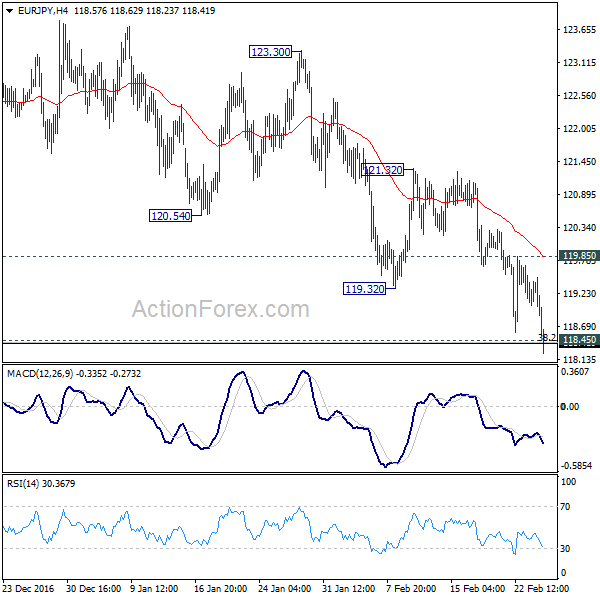 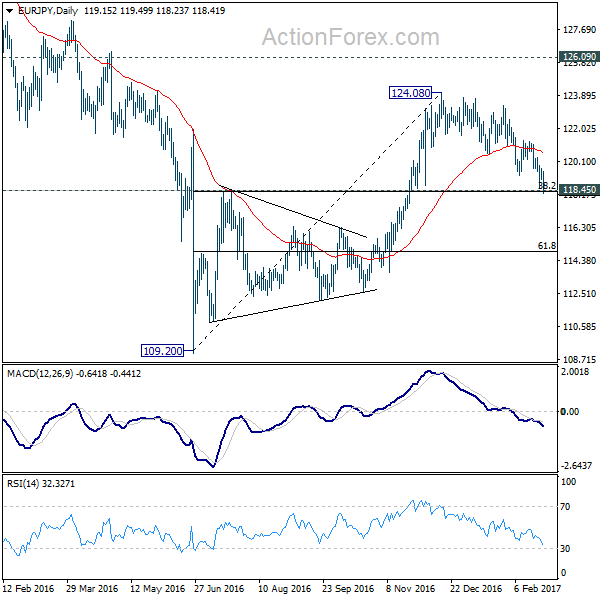 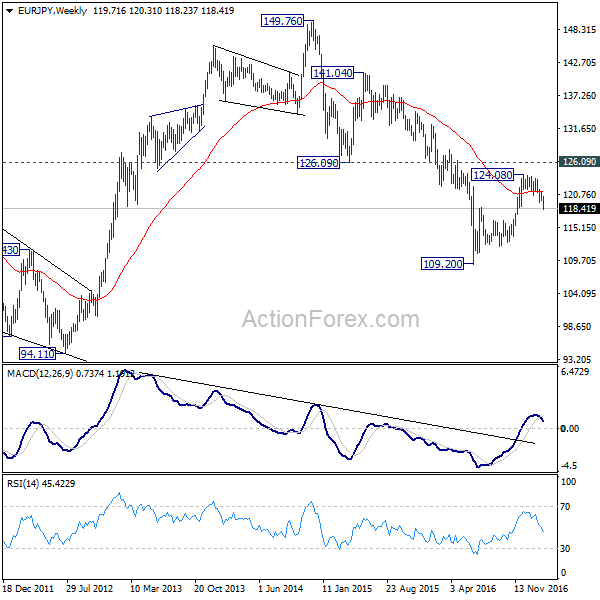 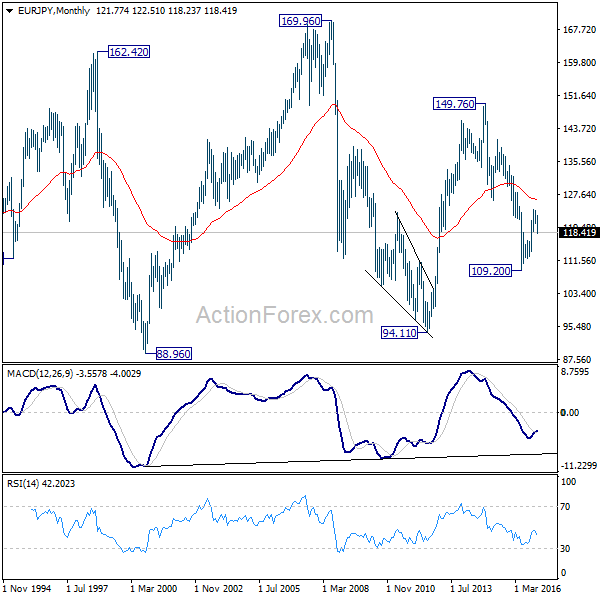