All Eyes on Thursday – UK Election, ECB and Comey

Risk appetite in the global financial markets was pretty strong last week. DOW, S&P 500 and NASDAQ shrugged off the much weaker than expected non-farm payroll report from US and all closed at record highs. Strength was also seen in other markets with FTSE 100 in UK and DAX in Germany hitting records too. In Japan, Nikkei also closed above 20000 handle for the first time since 2015. The sharp fall in US yields following NFP argues that markets could be starting to bet on a relatively slower tightening path by Fed and that could be a reason for the strength in US stocks. Eurozone sentiments, on the other hand, was lifted by optimism on easing political risks and improving economic outlook. Meanwhile, UK stocks are riding on the weakening Pound, in particular against Euro.

In the currency markets, Canadian Dollar ended as the weakest major currency as dragged down by the weakness in oil prices. Aussie followed as the second weakest. But both have regained much ground against the greenback after NFP release. Dollar ended as the third weakest one as markets starting question the momentum in US economy and whether it could really withstand a total of three rate hikes this year. Sterling ended as the fourth weakest as traders were getting more cautious ahead of UK election. Swiss Franc and Euro were the strongest ones and the Franc could be additional boosted by safe haven flow from Sterling. Euro were supported firmly by expectations on ECB.

All eyes will now be on the super heavy weight events on Thursday this week, on June 8. UK election has now turned into an open race as support for Prime Minister Theresa May and Conservative tumbled in recent weeks. Meanwhile, support for Labour and leader Jeremy Crobyn surged. A hung parliament after the election is now a realistic possibility. While the chance is still slim, it’s not totally unimaginable even for Crobyn to snap a win. The picture of Brexit negotiation with EU, which is scheduled to start on June 19, is highly uncertain, including the stance, the strategy, the personnel.

One the same day, ECB is widely expected to keep monetary policies unchanged. The new staff projections on growth and inflation will be the first things to watch. Also, there are expectations that ECB could tweak its language a bit to the hawkish side. For example, the central could close the door for further stimulus. There could also be acknowledgement that risks to outlook are now more balanced. And note that the current EUR 60 a month asset purchase program is going to end by the end of the year. It will be reasonable for ECB to start telling the markets what it will do thereafter in the September meeting. And President Mario Draghi could start to pave the way for that announcement in September at this week’s press conference.

In US, former FBI Director James Comey, fired by US President Donald Trump last month, will testify before Senate Intelligence Committee this Thursday too. It’s certain that Comey will be asked questions regarding Trump’s pressure on him to drop investigation into former national security adviser Michael Flynn on his tie to Russia. The markets are generally much more interested to know the details of Trump’s tax reforms and policies. But Trump will have to survive this test first.

Technically, dollar index resumed recent fall from 103.82 and hit as low as 96.65 last week. Further decline is expected this week for 61.8% retracement of 91.91 to 103.82 at 96.46 this week. This will correspond to EUR/USD’s test on 1.1298 resistance. As mentioned before, 103.82 is possibly a medium term top considering bearish divergence condition in weekly MACD and the firm break of 55 week EMA. Fall from 103.82 could turn out to be a medium term correction. Sustained break of 96.46 would pave the way to long term cluster level at 91.91, 38.2% retracement of 72.96 to 103.82 at 91.93, before having enough support for a sustainable rebound. In any case, break of 97.77 resistance is needed to indicate short term bottoming. Otherwise, near term outlook will stay bearish.

There are many key happenings ahead that could turn the markets around, like ECB’s failure to deliver, an unexpected outcome of UK election. But one thing that’s more certain is that markets would continue to question Fed’s rate path after the weak employment data. Yields will likely stay pressured and head lower even if stocks might extend the record run. That’s likely to drag USD/JPY down. Indeed, USD/JPY’s break of 110.47 minor support on Friday is seen as an early sign that it’s resuming the fall from 114.36. Hence, we’ll sell USD/JPY on recovery to 110.80 this week, with stop at 111.70. Break of 110.23 support will send the pair to 108.12 as our first target and 106.48 fibonacci level as second target.

In the bigger picture, price actions from 125.85 high are seen as a corrective pattern. It’s uncertain whether it’s completed yet. But in case of another fall, downside should be contained by 61.8% retracement of 75.56 to 125.85 at 94.77 to bring rebound. Overall, rise from 75.56 is still expected to resume later after the correction from 125.85 completes. 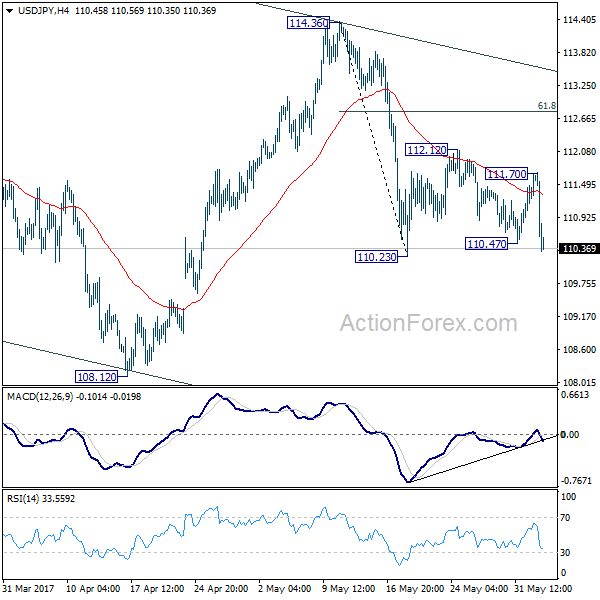 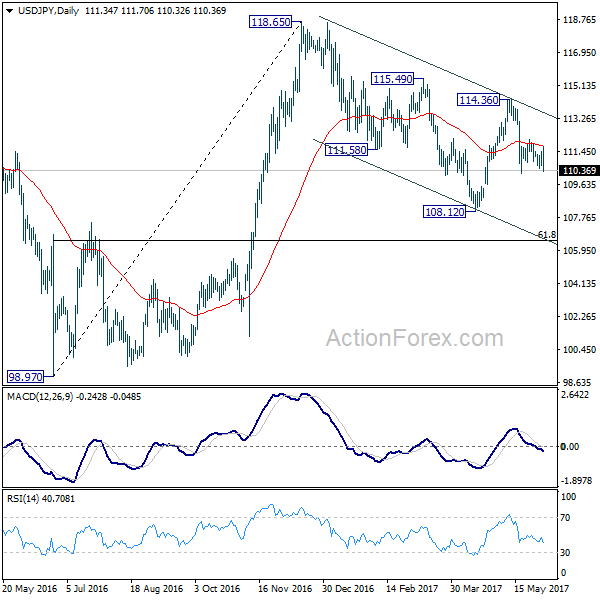 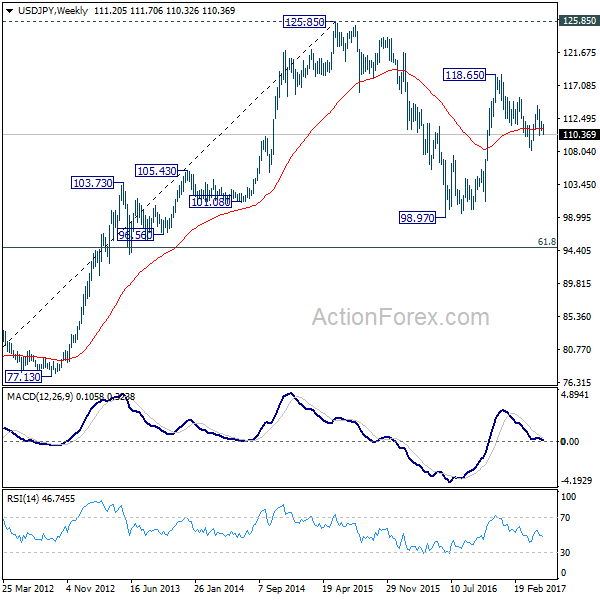 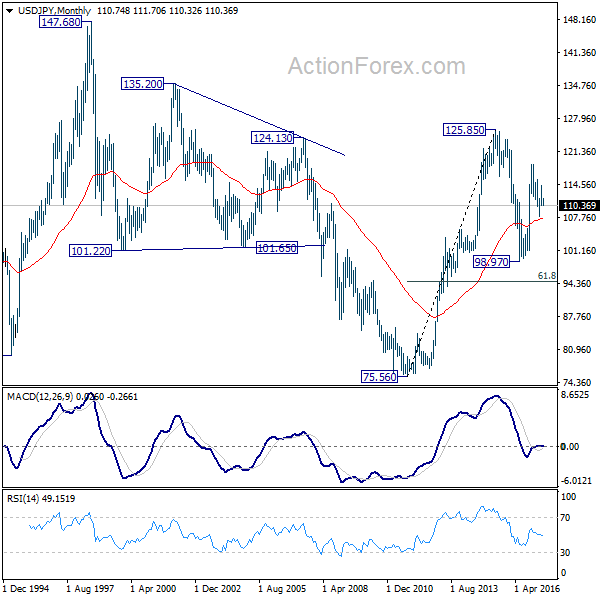