There wasn’t a unified theme in the forex markets last week. Movements in the major currencies were driven by different factors. But a trend to note is that markets attentions were generally back to central banks, from politics. The divisions in Fed and BoE boards were very apparent and showed that the overall policy stances of both central banks could be shifting. Euro was mixed as it’s awaiting economic data to push ECB officials to recede from being too dovish. Meanwhile, Canadian Dollar failed to extend the BoC inspired rally as rate hike bets cooled after tame inflation readings. The extended rout in oil price also added some weight to the Loonie and Aussie. New Zealand Dollar, on the other hand, ended as the second strongest one, next to Swiss Franc, on a mild RBNZ hawkish turn.

In US, markets were getting increasing doubtful on whether Fed will hike interest rate again in September. And the voices of doves were getting louder after three months of weak inflation reading. St. Louis Fed President James Bullard said on Friday "recent inflation data have surprised to the downside and call into question the idea that US inflation is reliably returning toward target." And his view is that inflation is not going to increase substantially "based on current estimates of the relationship between unemployment and inflation." He urged Fed to "wait and see how the economy develops before making any further adjustments to the policy rate."

Chicago Fed President Charles Evans said earlier in the week that the current environment of low inflation "supports very gradual rate hikes and slow preset reductions in our balance sheet". And, "it remains to be seen whether there will be two rate hikes this year, or three, or four or exactly when we start paring back reinvestments of maturing assets." He added that "I don’t see why we would not be served to allow more time to wait." Evans also urged Fed to "assure the public that we recognize the new low-inflation environment and that we are not overly conservative central bankers who see our inflation target as a ceiling."

On the other hand, there are Fed officials who aren’t concerned with the inflation undershoot. Cleveland Fed President Loretta Mester said that "inflation is on this gradual upwards path that we’ve been projecting for a while." And she added that "we got a couple of weak reports but fundamentally it doesn’t look like demand is falling out." She sees the current "gradual reduction of accommodation" makes senses to her.

New York Fed President William Dudley didn’t sound much concerned with low inflation neither. Instead, he noted that the US is "pretty close to full employment. And if labor market continues to tighten further "wages will gradually pick up". And with that "inflation will gradually get back to 2%". Regarding the economy, Dudley also expressed that he is "confident" that the expansion has "quite a long way to go".

Overall, the growing voice of doves is limiting Dollar’s strength for rebound. 10 year yield was held in range below key near term resistance at 2.229 and maintained bearish outlook. Additional pressure was seen in 30 yield yield as oil rout continued. TYX dropped sharply to close at 2.714 last week and took out 2.781 fibonacci support firmly. 55 week EMA was also decisively taken out. The development argues that rebound from 2.102 low has completed at 3.201 after failing to push through 3.255 cluster resistance, 61.8% retracement of 3.976 to 2.102 at 3.260. There is prospect of further fall to 61.8% retracement of 2.102 to 3.201 at 2.521 and below.

Similar division is seen in BoE. On the one hand, BoE Governor Mark Carney said in his Mansion House speech that "now is not yet the time to begin that adjustment" of monetary policies. He added that "different members of the MPC will understandably have different views about the outlook and therefore on the potential timing of any Bank Rate increase. But all expect that any changes would be limited in scope and gradual in pace." For him, he would like to see "the extent to which weaker consumption growth is offset by other components of demand, whether wages begin to firm, and more generally, how the economy reacts to the prospect of tighter financial conditions and the reality of Brexit negotiations."

On the other hand, BoE chief economist Andy Haldane said that partial removal of monetary stimulus would be "prudent relatively soon". And he noted that "risks associated with tightening too early, on the one hand, and too late, on the other, has swung materially towards the latter in the past six to nine months." He pointed out that "the risks of tightening too early have shrunk as growth and, to lesser extent, inflation have shown greater resilience than expected. And if policy tightened too late, this could result in a much steeper path of rate rises later on." Haldane’s comments was taken seriously by the markets as firstly, he’s the chief economist. Secondly, he’s perceived by many as the most dovish MPC member. Thirdly, while Kristin Forbes will be released by Silvana Tenreyro, there are potentially still three MPC member, including Haldane, Ian McCafferty and Michael Saunders, that could vote for rate hike ahead.

But overall, the Pound ended the week broadly lower except versus Aussie and Loonie. It’s still weighed by political uncertainties in UK as well as all the unknowns regarding Brexit. To recap, UK and EU representatives met in Brussels last week for the first formal Brexit negotiation. Agreement was made that talks until October should focus on the three issues of financial settlement, citizens rights and Northern Ireland. Further talks will be held in the weeks of July 17, August 28, September 18 and October 9. UK’s Brexit Minister David Davis said he was "encouraged" by the first talks that "laid solid foundations for future discussions and an ambitious but achievable timetable". On the other hand, EU’s chief negotiation Michel Barnier said that little was achieved other than setting a timetable and a structure for negotiations.

FTSE 100 ended the week mildly lower and continued to test 55 day EMA. Our view on FTSE’s outlook remains unchanged. Upside momentum has been diminishing clearly with bearish divergence condition in daily MACD and the terminal triangle like structure. The index is starting to be vulnerable for a trend reversal and sustained break of 55 day EMA would now put 7096.83 key support level in focus. And we’d like to point out again that the impact of Pound depreciation on corporate earnings have been fading. And the correlation of Sterling and FTSE could be turning positive. Thus, the next selloff in FTSE might be accompanied by similar selloff in the Pound. We’ll keep an eye on such development.

Loonie weighed down by oil rout

Elsewhere, Canadian Dollar struggled to find the needed fuel for extending it’s BoC inspired rally. The Loonie was boosted earlier this month by the hawkish turn of BoC Governor Stephen Poloz. There was a chance to extend recent rise after last week’s strong retail sales report. But tamer than expected May inflation reading quickly knocked down the rally attempt. On the background, extended sell off in oil price was also weighing down the Canadian Dollar. WTI crude oil’s dive through 38.2% retracement of 26.05 to 55.24 at 44.09 is opening up the case for deeper fall through 40 handle to 61.8% retracement at 37.20. USD/CAD could extend the near term consolidation from 1.3164 if weakness in oil price persists.

Aussie also turned a bit weaker last week without any apparent reason. Selloff in AUD/NZD after RBNZ could be a factor dragging Aussie down. Weakness in iron ore price and softening Chinese demand is seen as another factor. But the overall outlook of Aussie in the currency markets is a bit mixed. On the one hand, AUD/NZD’s near term down trend has just resumed and is on course for 1.0323 support first and then 1.0234. EUR/AUD is also trying to draw support from 1.4614 fibonacci level and 55 day EMA to rebound. On the other hand, AUD/USD is held above 0.7523 support so far and maintains near term bullishness. Development in Aussie ahead is worth a watch. 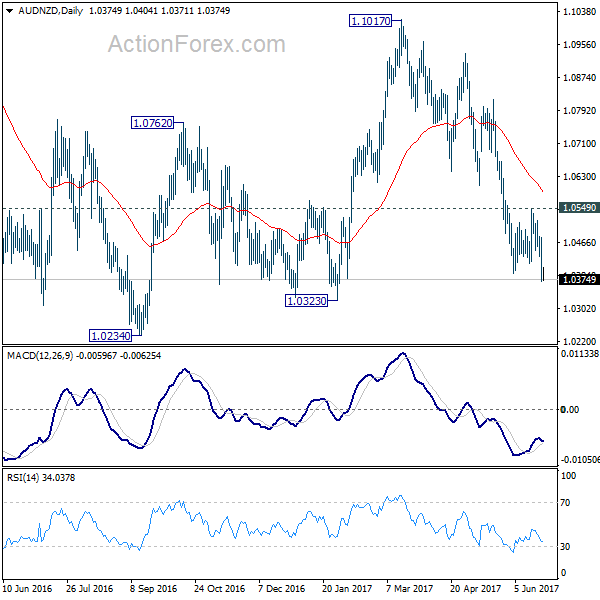 Meanwhile, we’ll start to look at Aussie short opportunities but keep our hands off first.

GBP/USD dropped to 1.2588 last week and breached 1.2614 key support level but recovered. Upside of rebound was limited below 1.2813 resistance and outlook is unchanged. Initial bias remains neutral this week first. At this point, we still favor the case that consolidation pattern from 1.1946 has completed at 1.3047 already. Sustained break of 1.2614 should confirm our bearish view and target a test on 1.1946 low next. However, break of 1.2813 resistance will dampen our view and turn bias back to the upside for 1.3047 and above. 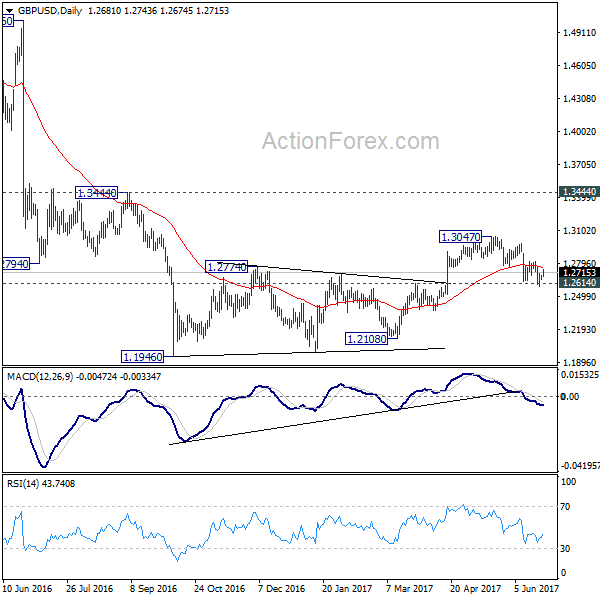 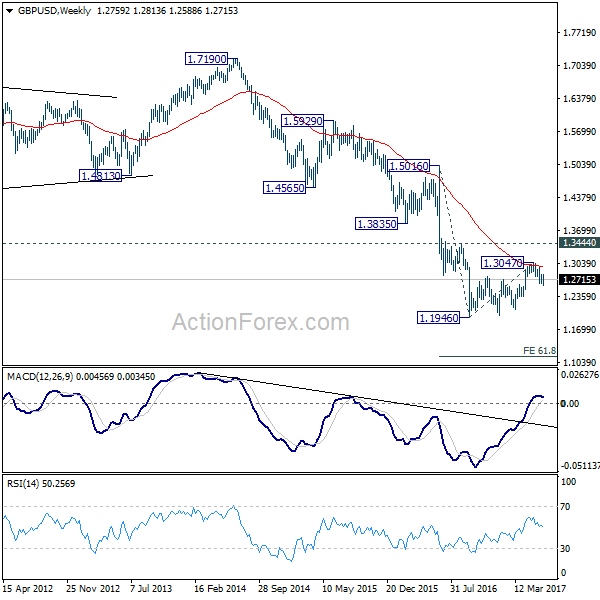 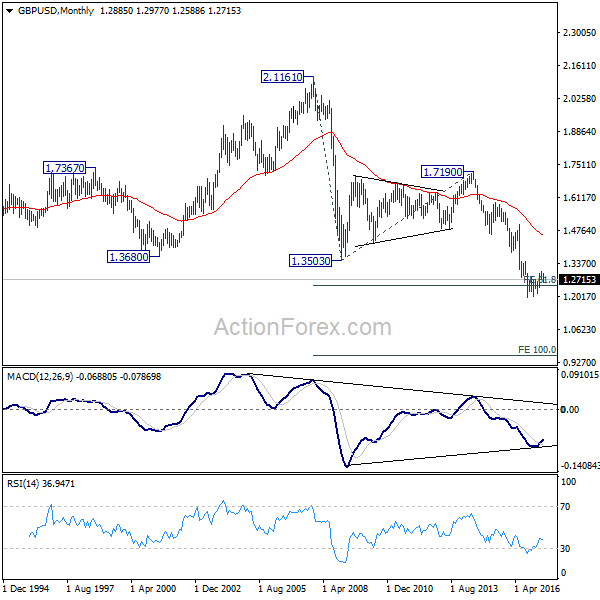