Dollar ended last week generally lower, except versus Swiss Franc and Canadian Dollar. The greenback was pressured as poor economic data raised recessions fears while traders added to bet of Fed cut this month. Though, there is no clear sign of bearish reversal in the greenback yet, except versus Yen. After all, even though Fed might ease policy again, so do some others like ECB. And more importantly, the developments would be heavily dependent on results of US-China trade talks this week.

On the other hand, Yen was the strongest one last week, but its upside was limited by strong rebound in stocks towards the end. Falling treasury yields would likely provide further support to the Japanese currency ahead. In particular, US 10-yield could resume recent down trend soon by making new low. Sterling and Euro were the next strongest, awaiting Brexit developments.

The non-farm payroll report released last week was described by some as being “goldilocks”. It’s definitely not strong enough to halt Fed’s mid-cycle adjustment on interest rate. Yet, it’s not weak enough to indicate clear problems with the job market or consumers. NFP grew 136k in September. Unemployment rate dropped to 3.5%, lowest since December 1969. yet, average hourly earnings ticked down a little. The set of job data also offset some of the recession fear triggered by ISM indices.

Comments from Fed officials were rather non-committal. Fed chair Jerome Powell said on Friday that “while not everyone fully shares economic opportunities and the economy faces some risks, overall it is — as I like to say — in a good place.” And, “our job is to keep it there as long as possible.” Fed vice chair Richard Clarida also said the economy is in a “good place”. Clarida emphasized that Fed is “not on a preset course” and policymakers will take the meetings “one at a time”.

Futures pricing in 76.4% of another Fed cut in Oct

Markets somewhat added to bets of another rate cut by Fed this month on October 30. Fed fund futures implied 76.4% chance of another -25bps cut to 1.50-1.75%, up from 49.2% a week ago and 54.6% a month ago. But we’d emphasize that the pricing could change drastically on firstly, result of US-China trade talks this week. And secondly, US September CPI data to be released on Thursday.

DOW staged a U-turn on Thursday after dipping to as low as 25743.76. Expectations on Fed cut somewhat helped lifted DOW further before Friday’s close. Current development suggests that price actions from 27398.68 are merely forming a consolidation pattern. More range trading could be seen. But in case of another fall downside should be contained by 38.2% retracement of 21712.53 to 27398.68 at 25226.57 to bring rebound. Eventual break of 27398.68 for new record high is in favor.

Dollar index still in up trend, as supported by Euro weakness

Dollar index’s uptrend continued last week a hit 99.66 before closing at 98.80. The index is mainly supported by selloff in EUR/USD, partly offset by decline in USD/JPY. We’d still expect the uptrend to continue towards 78.6% retracement of 88.26 to 103.82 at 100.49. While Fed’s rate cut might give Dollar some pressure, Euro would likely suffer more on expectation of even more ECB stimulus.

USD/JPY’s sharp decline last week argues that corrective recovery from 104.45 has completed at 108.47, ahead of 109.31 key resistance. Initial bias stays on the downside this week for retesting 104.45 low first. On the upside, above 107.29 minor resistance will turn intraday bias neutral first. But risk will remain on the downside as long as 108.47 resistance holds. 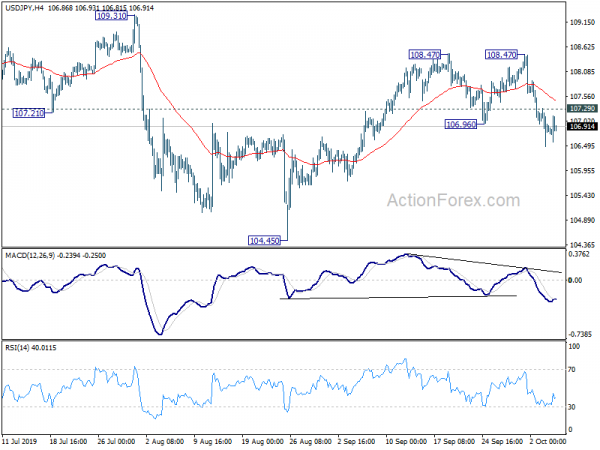 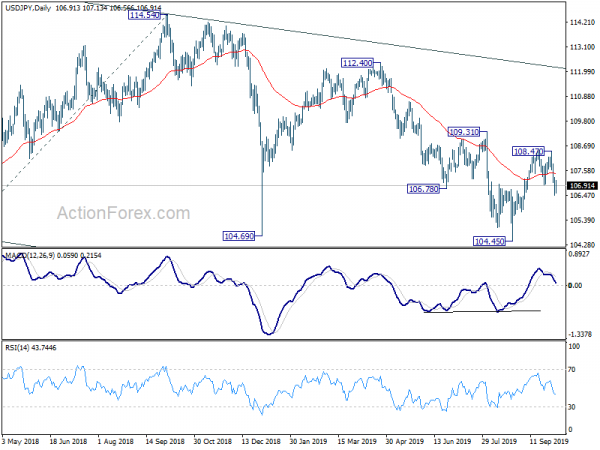 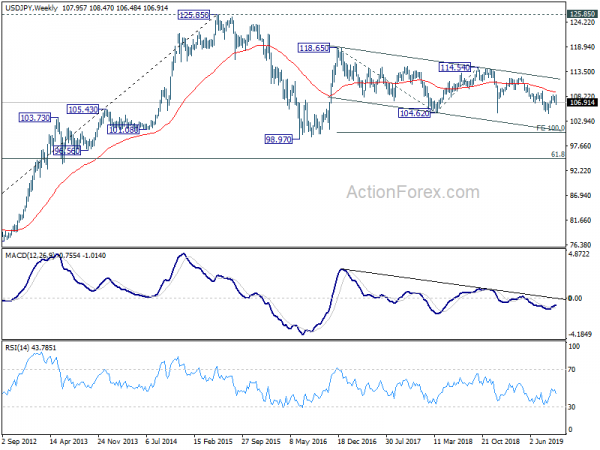 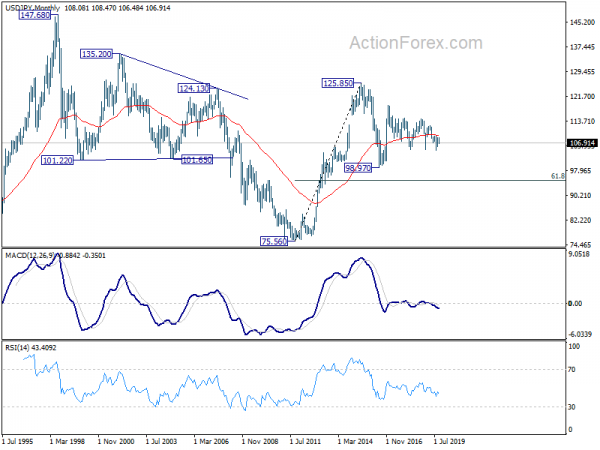