Dollar ended last week as the weakest currency as markets took Fed Chair Janet Yellen’s testimony as a dovish one. Traders further pared back bet on a rate hike in September. And the development was accompanied by surge in stock indices to record highs. Canadian Dollar ended as the second strongest as lifted by BoC rate hike and rebound in oil prices. But it was outshone by Australian dollar which soared on iron ore prices. Sterling followed as markets continued to adjust their expectations on a near term BoE hike after central banker comments. Euro and Swiss Franc followed Dollar as the weakest ones ahead of ECB meeting this week. Meanwhile, Yen traded mixed as focus is turning to BoJ meeting.

Fed Chair Janet Yellen delivered mostly what the markets expected during her testimony to Congress last week. She reiterated that Fed is still on course for "gradual" rate hike. The unwinding of the USD 4T balance sheet will start later this year. Nonetheless, the biggest surprise was that in her view, federal funds rate "would not have to rise all that much further" to reach a neutral level. Markets perceived that as a dovish sign that there is not much room for Fed to hike even if the tightening cycle is going to continue. Further more, traders continued to pare bet on rate hike after disappointing CPI and retail sales data. Currently, Fed fund futures are only pricing in 8.4% chance of a September hike. That’s less than half of 18% pricing a month ago.

Such sentiments and expectation is also clearly seen in surging equity, falling yields and Dollar. US equity indices staged a strong upside breakout on Friday and surged to new records highs. DOW rose 84.65 pts, or 0.39% to close at 21637.74. S&P 500 rose 11.44 pts, or 0.47%, to close at 2459.7. Both are new records. NASDAQ also tried to catch up and rose 38.03 pts, or 0.61% to close at 6312.47, just inches below record high at 6341.70. DOW’s up trend is relatively healthy and is set to extend. The index stayed comfortably above rising 55 day despite recent consolidation. Daily MACD also turned up above signal line, indicating regaining of momentum. The key will now be on near term channel resistance. Break there will indicate further upside acceleration and would likely violate the bearish divergence condition in daily MACD. In that case, DOW would target 61.8% projection of 17883.66 to 21169.11 from 20379.55 at 22410.02 next.

Treasury yield, on the other hand, was rather unconvincing. The deep pull back in 10 year yield last week raised the chance that it’s rejected by 2.423 resistance. But this it isn’t confirmed yet as for the moment, TNX is still supported by 55 day EMA. Break of 2.423 will confirm that the consolidation pattern from 2.621 has completed at 2.103 and should bring retest of this high. However, sustained trading below 55 day EMA (now at 2.276) will extend the consolidation with another fall through 2.103.

Canadian Dollar was boosted by the neutral BoC rate hike last week, as well as rebound in oil price. As we noted before, there was a risk to Canadian Dollar if BoC signaled that the highly anticipated rate hike was a one-off. Instead, the central bank said in the statement that ""future adjustments to the target for the overnight rate will be guided by incoming data as they inform the Bank’s inflation outlook". This was taken by the markets as an indication that BoC is now in a tightening cycle. Upcoming data, including this week’s CPI and retail sales, could drive the Loonie further high.

At the same time, oil price will be another factor for Loonie traders to watch. Last week’s rebound put 55 day EMA back into focus ( now at 46.64). Sustained break there will extend the rebound from 42.5 to trend line resistance, which is close to 50 handle. Nonetheless, rejection from 55 day EMA will bring another fall towards 50% retracement of 26.05 to 55.24 at 40.65 before completing the correction from 55.24.

While Canadian Dollar was strong, it was indeed out-performed by Australian Dollar, which ended as the strongest currency last week. A key boost to Aussie was report that iron ore price jumped on pickup in Chinese demand. It’s reported that China imported 94.7m tonnes of iron ore in June, up from 91.5m tonnes in May. A total of 539m tonnes was imported in the first half of the year. And, China is going to buy as much as 1b tonnes of iron ore from overseas producers this year. More importantly, if the pace in the first half continued, China iron ore import would top record of 1024b tonnes. Iron ore price was back to 65 level after tumbling to 53 back in June on concerns of slowing China import. AUD/USD jumped to close at 0.7828 and the upside acceleration could push for a strong breakout that indicate larger trend reversal.

Sterling was the third strongest currency as market looked past recent disappointing economic data. BoE Deputy Governor Ben Broadbent’s comment that he’s not ready to vote for a hike in August triggered brief setback in the Pound. But BoE hawks Ian McCafferty’s talk of unwinding the GBP 435b assets revived speculations of tightening. This was indeed the first time a BoE official talked about unwinding in public. And McCafferty has made it very clear that he will still vote for a rate hike in the next meeting. Sterling staged a strong come back as markets were repositioning themselves ahead of this week’s inflation data from UK.

Euro was the third weakest currency, next to Dollar and Swiss Franc. It’s still generally expected that ECB would announce tapering of some sort in September, or by latest in October. There were also talks that ECB President Mario Draghi would make use of the annual Jackson Hole conference in US to signal a policy shift. However, there were also media reports that ECB would prefer to maintain flexibility and not indicate a clear end to the asset purchase program. Markets will be eager to look into ECB rate decision and press conference this week for more guidance, but there is unlikely anything new. For now, judging from the steep decline in EUR/CAD and EUR/AUD, traders could be trading the fact that even if ECB is on course for stimulus exit would be far outpaced by BoC and RBA.

The overall theme in the markets is unchanged. That is, we’re now entering into an era of monetary stimulus removal. Yen and Swiss Franc will continue to lag behind other major currencies. For the moment, we’d prefer not to chance rally in Loonie and Aussie, as well as Yen crosses. Instead, we’ll try to buy GBP/CHF as the late rebound is taken as a sign of near term reversal. The strong break of 1.2537 resistance indicates that pull back from 1.3067 has completed at 1.2239 after drawing support from near term channel. We’ll buy GBP/CHF at market this week for short term rally back to 1.3067. At this point, there is no sign of larger reversal yet with 38.2% retracement of 1.5570 to 1.1635 at 1.3138 intact. Hence, we’ll get out at 1.3000, with a stop put at 1.2450. 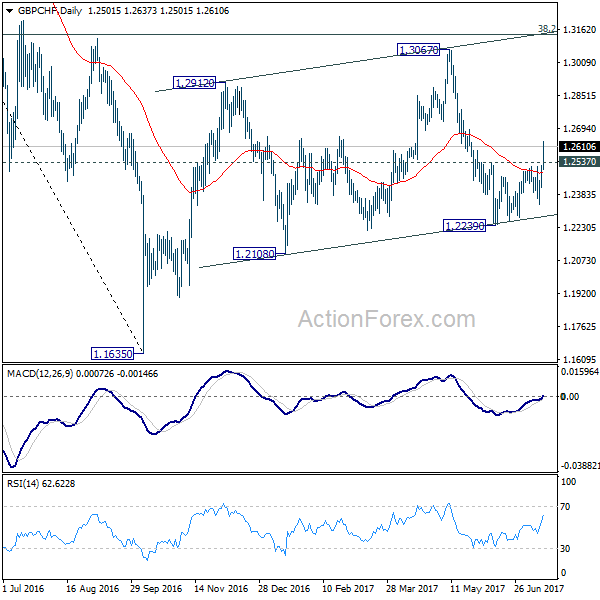 In the bigger picture, current development suggests that rebound from 0.6826 is developing into a medium term rise. There is no confirmation of trend reversal yet and we’ll continue to treat such rebound as a corrective pattern. But in any case, further rise is now expected to 55 month EMA (now at 0.8100) or even further to 38.2% retracement of 1.1079 to 0.6826 at 0.8451. Break of 0.7328 support is needed to confirm completion of the rebound. Otherwise, further rise is now in favor. 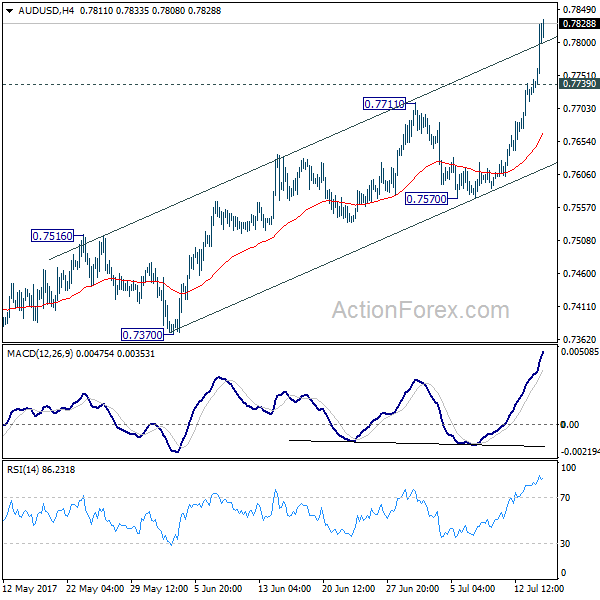 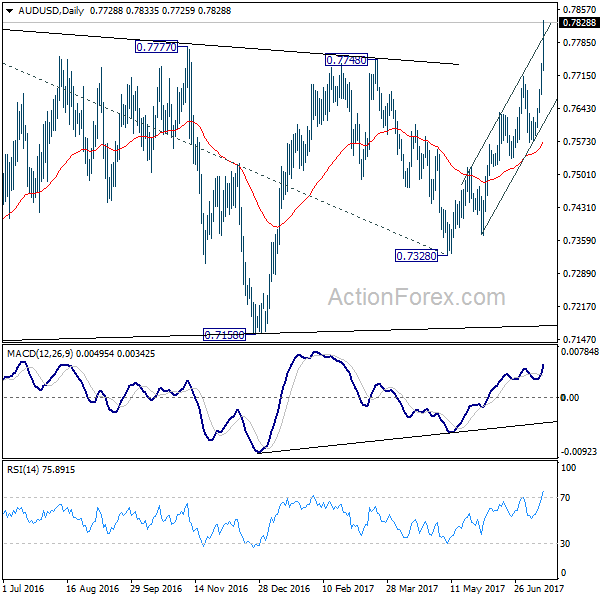 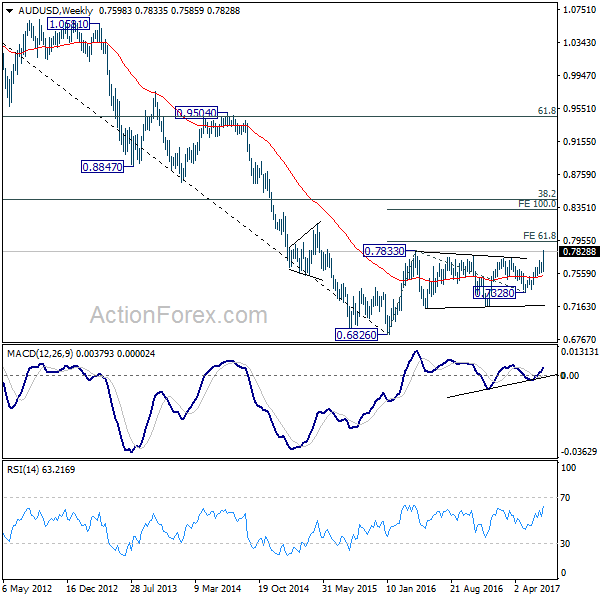 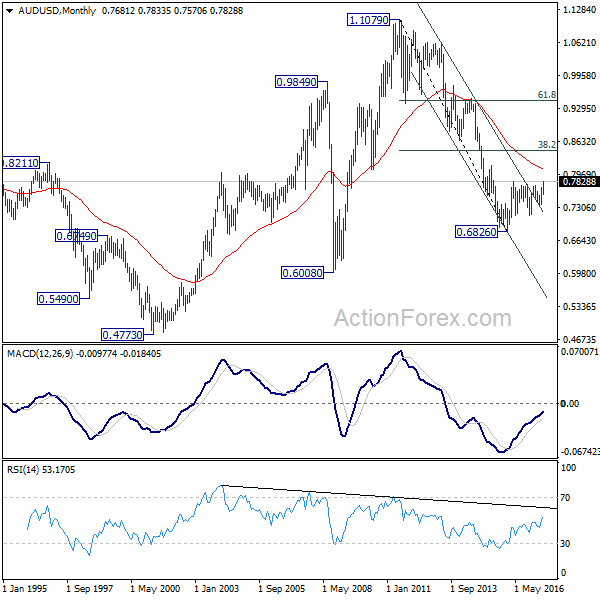