Risk Aversion to Stay as Politics, Geopolitics and Central Bankers in Focus

Risk aversion was again the main theme in the financial markets last week. But this time, commodity currencies ended as the strongest ones. Sterling was hardest hit as disappointing inflation reading further killed the chance of an early BoE hike. Euro followed on report that ECB President Draghi won’t address monetary policy in the upcoming Jackson Hole symposium this week. Also, the common currency was pressured as ECB minutes showed worries on Euro overshooting its strength. Dollar suffered much on the political turmoil in the White House but it ended slightly higher against most except Canadian Dollar and Australian Dollar. Meanwhile Yen and Swiss Franc failed to capitalize on risk aversion and ended the week mixed.

Economic data will take a back seat this week. Focus will firstly stay on the developments around US President Donald Trump’s administration. Secondly, US will start a joint military exercise with South Korea between August 21 and 31 and that might escalate the tension with North Korea. Central bankers speeches in the Jackson Hole Symposium will be closely watched, in particular Fed Chair Janet Yellen and ECB President Mario Draghi. Risk aversion will likely stay as any wrong step by the leaders will trigger another selloff in the markets.

Dollar recovery could be temporary, vulnerable to the downside

The resilience in Dollar last week was mainly thanks to the pull back in Euro. A key factor providing support for the greenback was comments from New York Fed President William Dudley. Dudley, an influential member of FOMC, affirmed that he remained in "favor of doing another rate hike later this year". However, the recovery in Dollar clearly lacked sustainable strength as FOMC minutes showed that many policy makers "saw some likelihood that inflation might remain below 2 percent for longer than they currently expected". Also, "several indicated that the risks to the inflation outlook could be tilted to the downside."

Overall market risk sentiment will be a key factor in determining Dollar’s fortune. DOW was under much pressure as business leader turned their back on Trump for his equating of Neo-Nazis with counter protestors. Selling intensified on rumor that Trump’s top economic advisor Gary Cohn was following. Even though it’s later clarified that Cohn is staying, the damage was already done. Trump’s firing of chief strategist Stephen Bannon triggered a brief recovery in DOW but the index was quickly under pressure again. There is deep concern that if the root causes, that is Trump himself, is not addressed, more business and political leaders will turn their back on him. And some analysts see the chance of fiscal policy paralyze as significant.

Commodity Yen crosses in consolidation only

Commodity/yen crosses recovered last week even though markets were in risk averse mode. But such recovery was seen as corrective as the crosses were oversold in the prior week. AUD/JPY’s recovery from 85.44 is clearly corrective looking and couldn’t get rid of 55 day EMA cleanly. More importantly, the bearish divergence condition in daily MACD and wedge like price actions suggest the cross is losing medium term momentum too. We’ll continue to favor more downside as long as 88.00 minor resistance holds. And break of 85.44 will target 81.77 key medium term support. 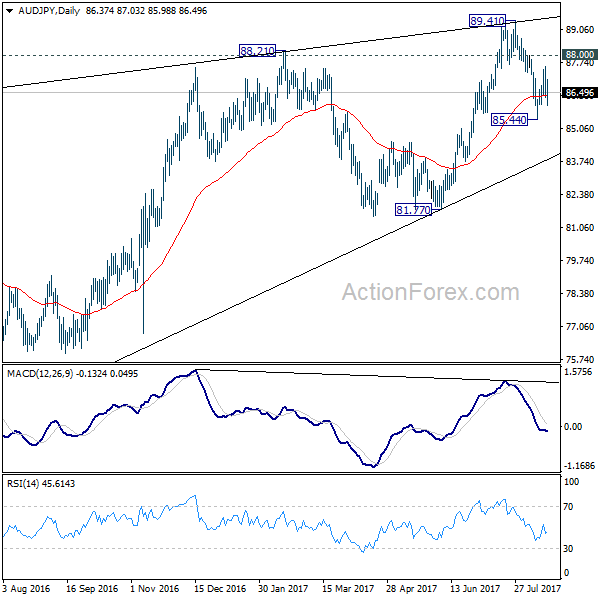 Similar picture is seen in CAD/JPY and further fall is expected as long as 88.01 minor resistance holds. Break of 85.45 will target 80.85 key support level. 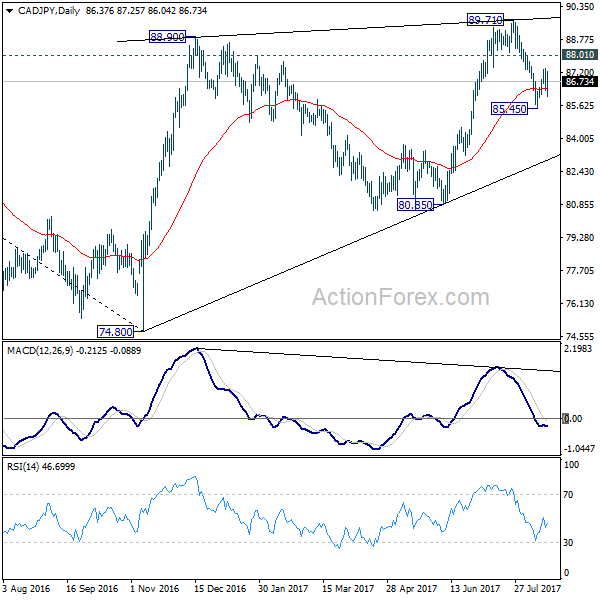 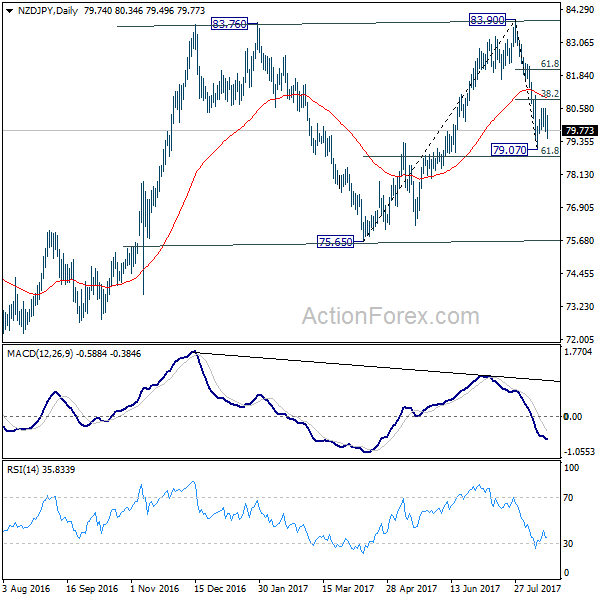 In addition to that, while dollar index is trying to draw support from above mentioned 91.91/3 level, it’s looking more vulnerable. With EUR/USD consolidation from 1.1908 for three weeks already, it’s about time for a breakout. Hence, we will buy EUR/USD on break of 1.1846 with stop at 1.1660. Target will be long term fibonacci level at 1.2516. 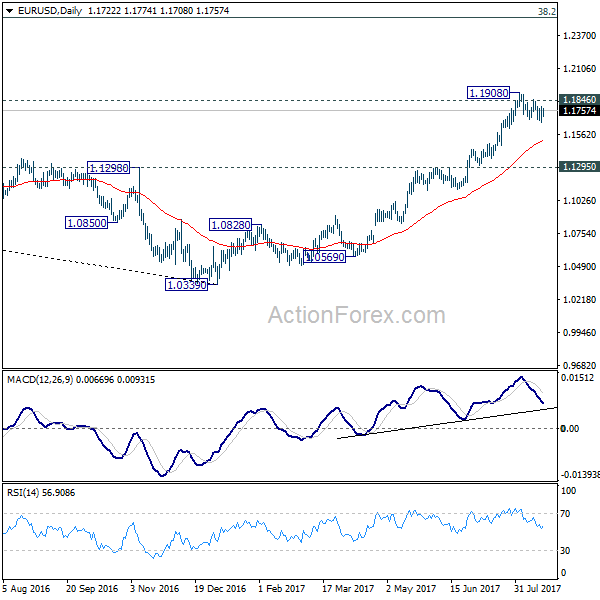 GBP/JPY’s fall from 147.76 extended to as low as 139.77 last week. Initial bias remains on the downside this week for 138.65 support first. Break there will extend the decline to 135.58 key support level. At this point, price actions from 148.42 are seen as a sideway consolidation pattern. Hence, we’ll expect strong support from 135.58 to contain downside and bring rebound. Nonetheless, break of 143.18 resistance is needed to indicate short term bottoming first. Otherwise, near term outlook will remain bearish in case of recovery. 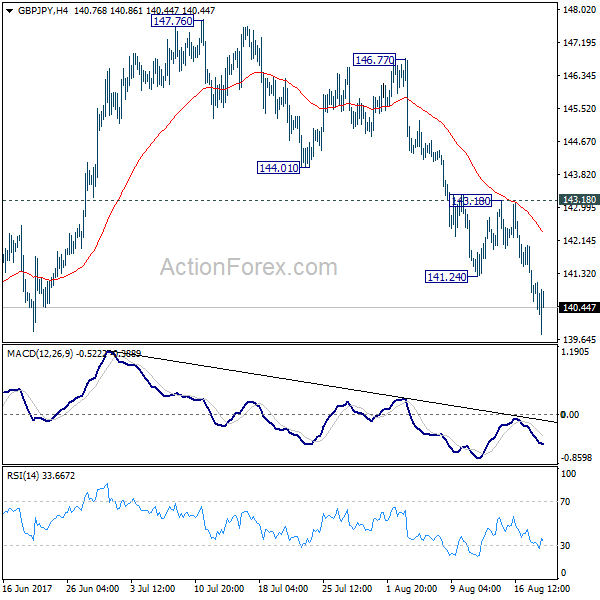 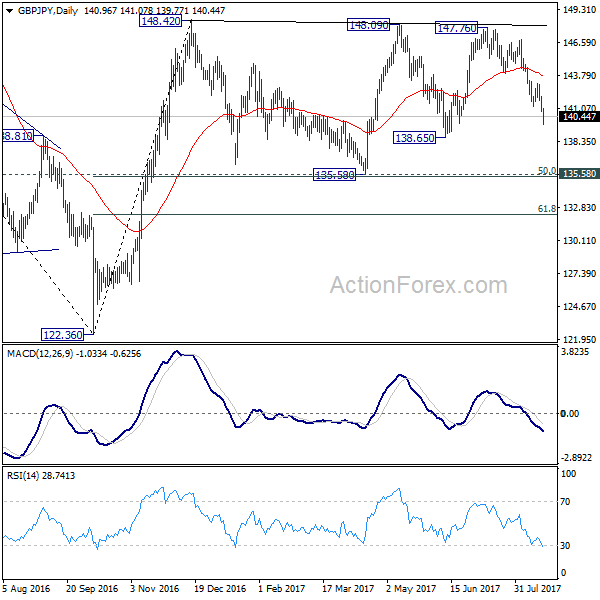 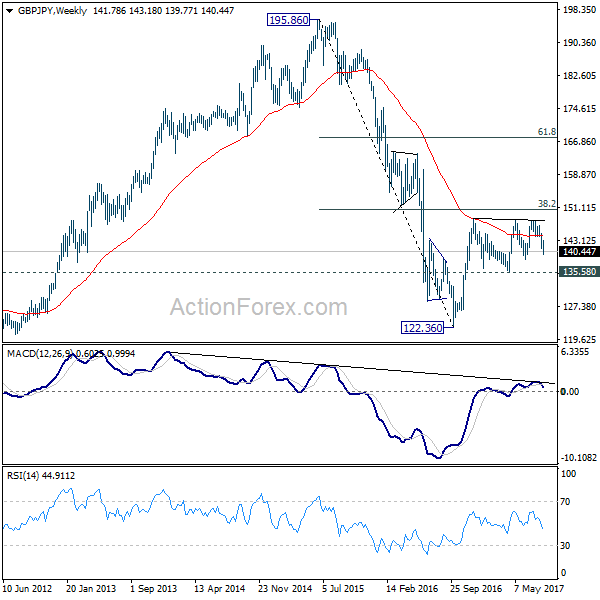 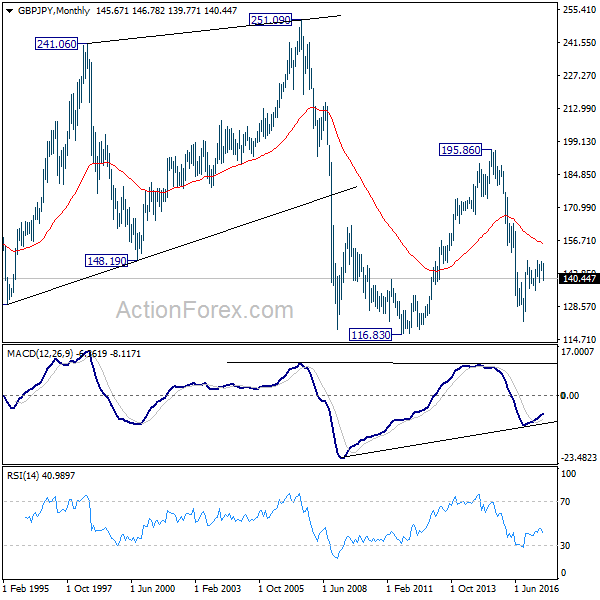