Yen and Dollar ended the week as the worst performing ones, as US stock markets came back with strong rally. Risk-on sentiments pushed commodity currencies broadly higher. Yet, Yen crosses are also held below recent highs despite the rebounds. Dollar’s pull back was also relatively weak. Some more time is needed to determine if they’re both in genuine reversal.

Sterling also dropped notably last week and ended as the worst performing one. From fundamental point of view BoE was just not hawkish enough, but not that dovish. No clear bearishness is warranted. But the technical picture in some crosses suggest that the near term outlook is not looking to well for the Pound.

The impressive comeback in US stocks last week caught us by a big surprise. DOW’s deep pull back the prior week proved to be just temporary, while S&P 500 and NASDAQ made new record highs. There was optimism over the bipartisan infrastructure deal, costing USD 1.2T over eight years, with USD 579B in new spending. Friday’s PCE inflation data also suggest that, at least, inflation is not running away from market expectations. 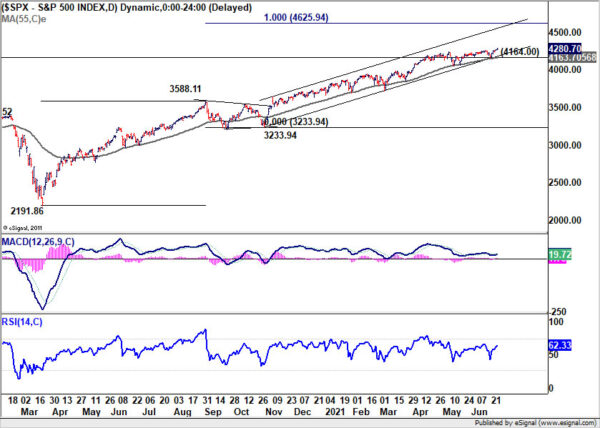 Dollar retreated mildly as markets turned back into risk-on mode. Yet, the selling was so far very weak, with major Dollar pairs struggled to break through 4 hour 55 EMAs decisively. As for Dollar index, we’d still favor more upside as long as 55 day EMA (now at 90.91) holds. Another rise could be seen back to 93.43 resistance and possibly above.

Sterling’s selloff last week could be partly attributable to the lack of hawkish surprise from BoE, in particular from the votings. Only chief economist Andy Haldane continued to vote for tapering. The statement set up expectations that the MPC would wait for August Monetary Policy Report to take any policy actions.

At the same time, the pandemic situation in the UK is relatively unclear. Daily cases surged back to above 15k level, due the spread of Delta variant. Yet, death tolls were low at around 20 a day. Vaccination still appeared to be effective in preventing serious cases and deaths. The UK Government also appears to be on track to allow fully vaccinated people to travel without restriction later. But this could still be a concern for traders.

But anyway, the technically development in Sterling is not too encouraging. Except versus Yen, there is prospect of deeper selloff in crosses in the near term at least. 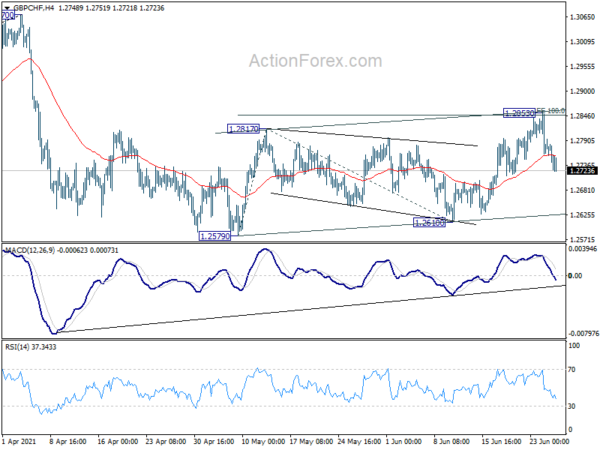 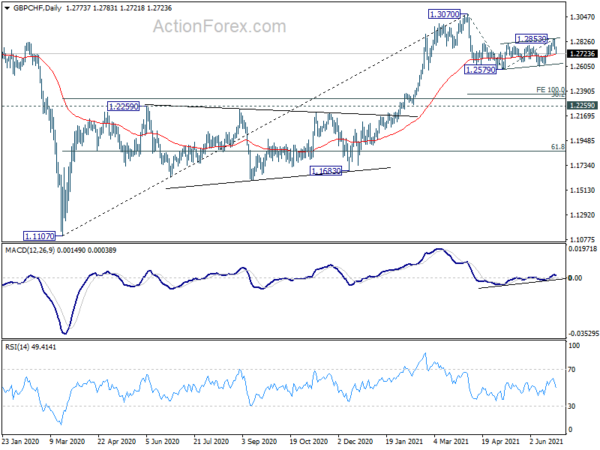 EUR/GBP recovered notably after edging lower to 0.8529 last week. Price actions from 0.8718 are very corrective, suggesting that rebound from 0.8470 would resume sooner or later. With breach of 0.8600 resistance, further rise is mildly in favor this week to 0.8670 resistance next. 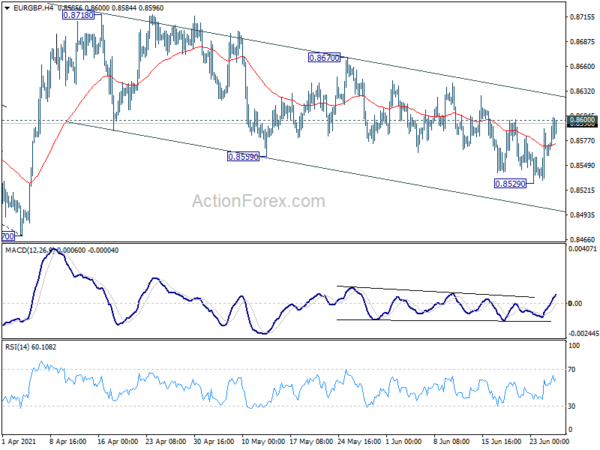 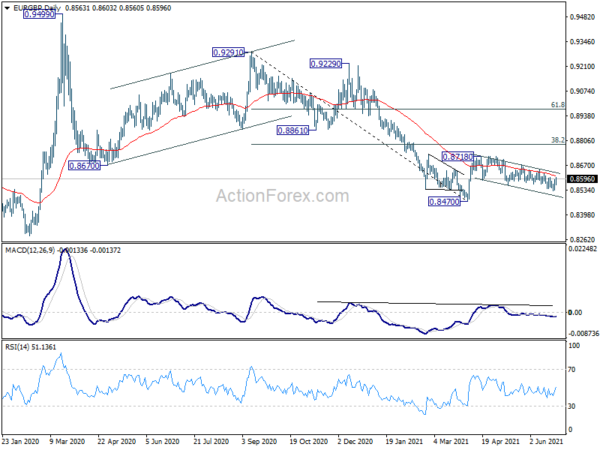 GBP/AUD also faced strong rejection from 1.8523 resistance and dropped notably last week. Immediate focus will now be back on 1.8191 support. Break there will raise the chance that whole corrective rise from 1.7412 has completed. With 1.8523 resistance intact, medium term outlook will remain bearish for another fall through 1.7412, to resume the whole down trend from 2.0840. 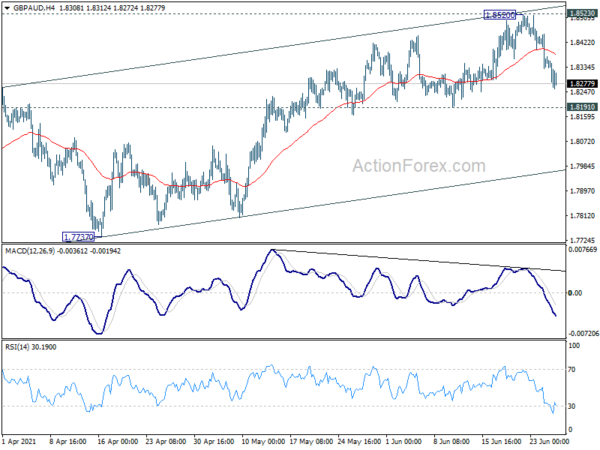 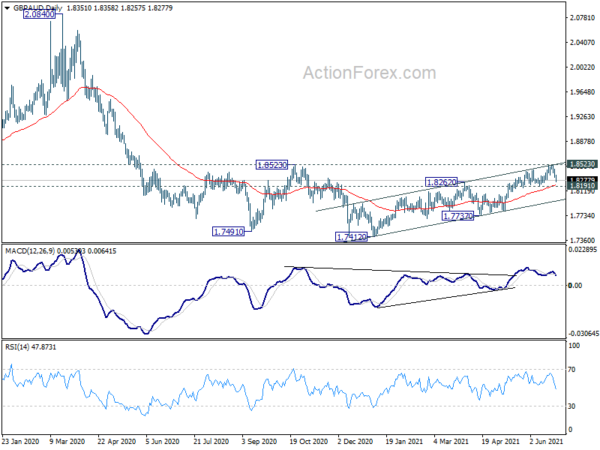 USD/CAD edged slightly higher to 1.2485 last week but retreated sharply since then. Downside is so far support by 4 hour 55 EMA (now at 1.2288). Initial bias stays neutral this week first. On the downside, sustained trading below 4 hour 5 EMA will argue that rebound from 1.2005 has completed after failing medium term channel resistance. Intraday bias will be back on the downside for retesting 1.2005. On the upside, above 1.2402 minor resistance will resume the rebound from 1.2005 towards 1.2653 key structural resistance. 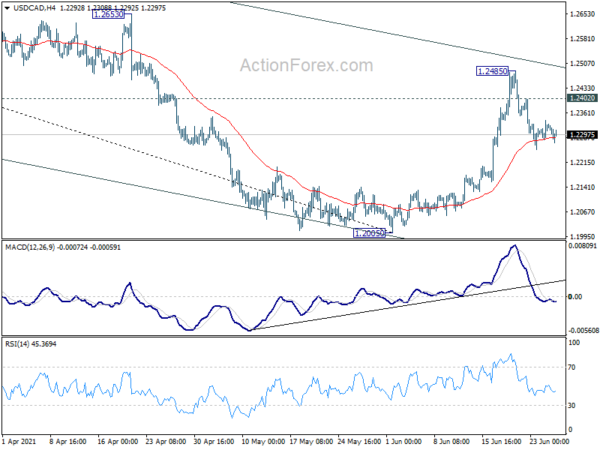 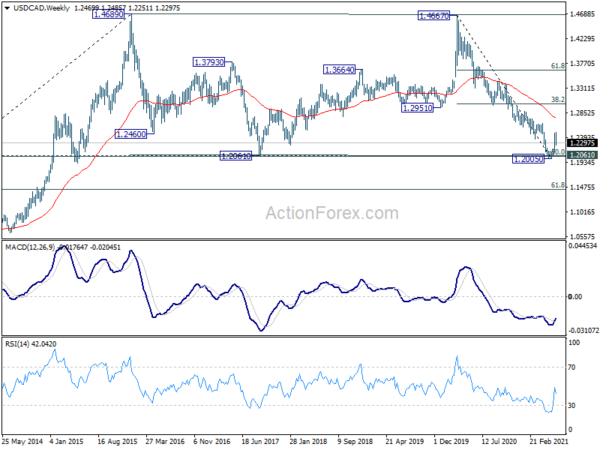 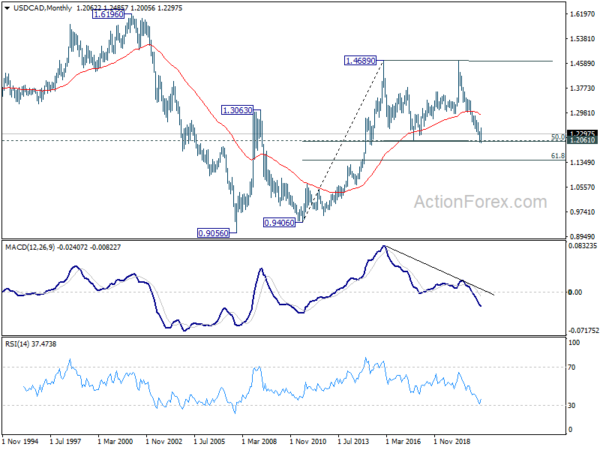