Yen’s fortune reversed last week as US treasury yields accelerate up after hawkish FOMC meeting and projections. US stocks also display strong resilience and closed generally higher, reversing prior losses. Sterling, on the other hand, shrugged off hawkish BoE voting and ended as second weakest. Aussie and Kiwi were not too far away with concerns over China’s Evergrande in Asian markets.

On the other hand, Canadian Dollar ended as the best performer, with help from extended rebound in oil price. Swiss Franc and Dollar followed as next strongest. However, it’s noted that Dollar’s upside momentum hasn’t been too convincing. It’s a big question on whether the greenback could ride on hawkish Fed to pick up more buying.

FOMC announce last week somehow met expectations of a hawkish twist. The statement clearly indicated that “a moderation in the pace of asset purchases may soon be warranted”, if the “progress continues broadly as expected”. That set up expectation that an announcement at the November meeting.

Additionally, Members have also pushed forward the timing of the first rate hike. The median dot plots showed that 9 out of 18 members projected it to happen in 2022. Indeed, the staff projection also showed that the policy rate would increase to 0.3% next year. 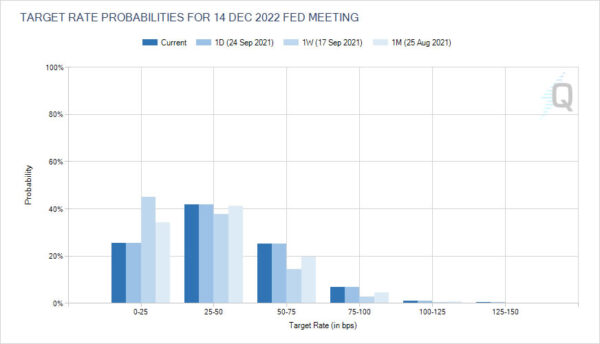 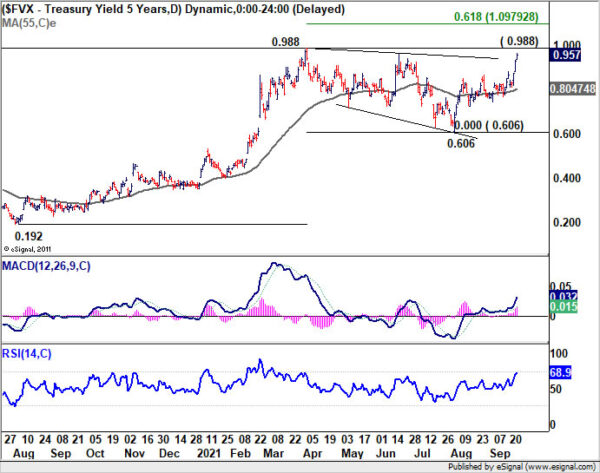 The benchmark 10-year yield also made substantial progress by breaking through 1.420 near term resistance. Overall, the development affirms that case that correction from 1.765 has completed at 1.128, after hitting 50% retracement of 0.504 to 1.765 at 1.134. Further rise is now in favor to retest 1.765 high next. The question is more on the strength of the momentum of the next rally. 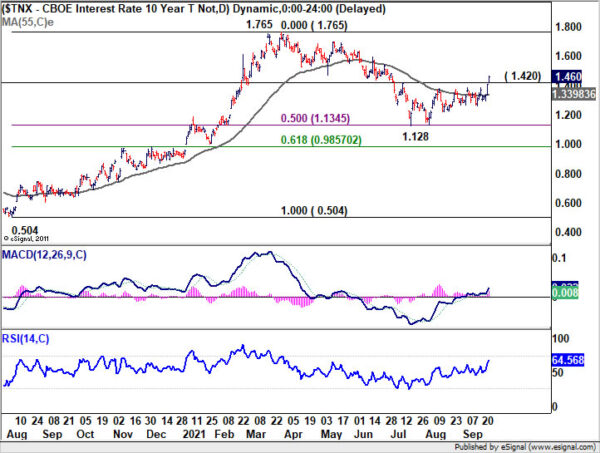 S&P 500 displayed strong resilience, could have completed brief pull back

Stocks were surprisingly resilient last week, even in response to the hawkish FOMC announcement. S&P500’s pull back looks completed at 4305.91 and near term bullishness was revived by a strong close above 55 day EMA. Consolidation from 4545.85 could turn out to be a relatively brief and shallow one. Even in case of another falling leg, downside would likely be contained by 23.6% retracement of 3233.94 to 4545.85 at 4235.23. 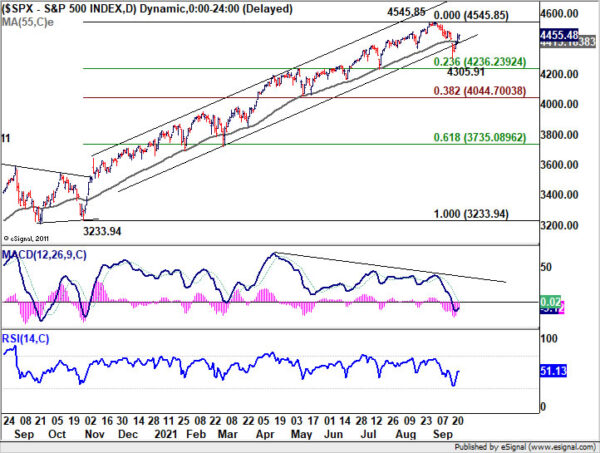 Dollar’s reaction to Fed was pretty muted while Dollar index was bounded in tight range last week. Major reaction was actually found in Yen’s selloff. Anyways, with 9.178 support intact, DXY’s rise from 89.53 is in favor to continue through 93.72. That would also resume the whole pattern from 89.20. 38.2% retracement of 102.99 to 89.20 at 94.46 remains the major hurdle for DXY to overcome, if it’s turning medium term outlook bullish. 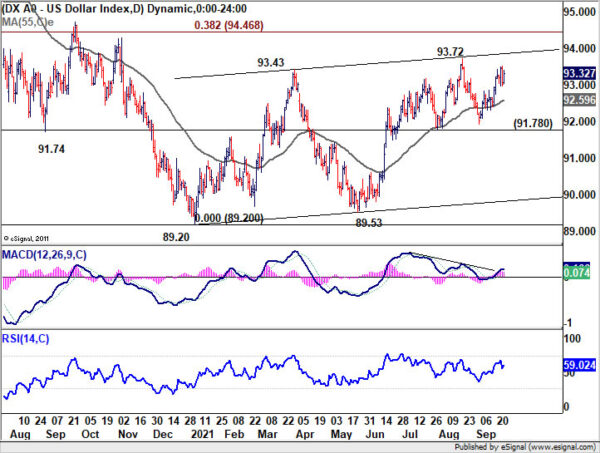 Talking about Yen’s selloff, it’s particular apparent in CHF/JPY which staged a sharp reversal and ended the week as the biggest mover. CHF/JPY has indeed drew strong support from key zone of between 38.2% retracement of 106.71 to 122.74 at 116.61 and 55 week EMA (now at 118.05). Near term focus is now back on 120.57 resistance. Firm break there should full retain medium term bullishness, and could send the cross through 122.74 high to resume larger long term up trend. In such case, Yen’s selloff could accelerate further elsewhere. 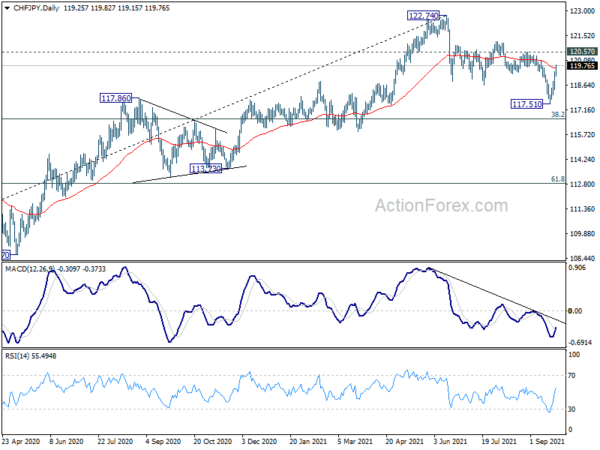 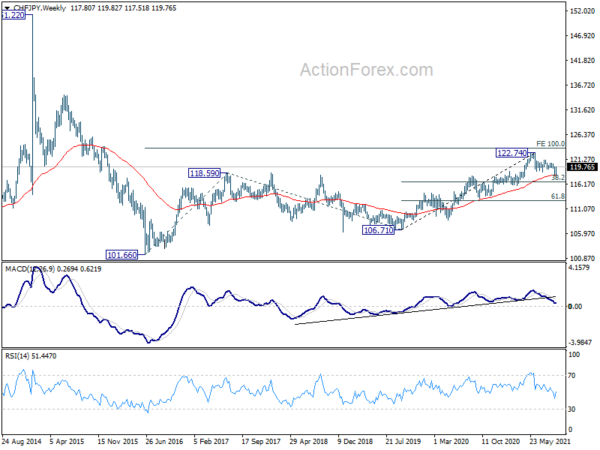 USD/JPY surged sharply higher to 110.78 last week. The break of 110.44 resistance suggests that consolidation pattern from 111.65 has completed already. Initial bias is now on the upside this week. Firm break of 110.79 resistance will target a test on 111.65 high. On the downside, below 110.30 minor support will mix up the near term outlook and turn bias neutral again. 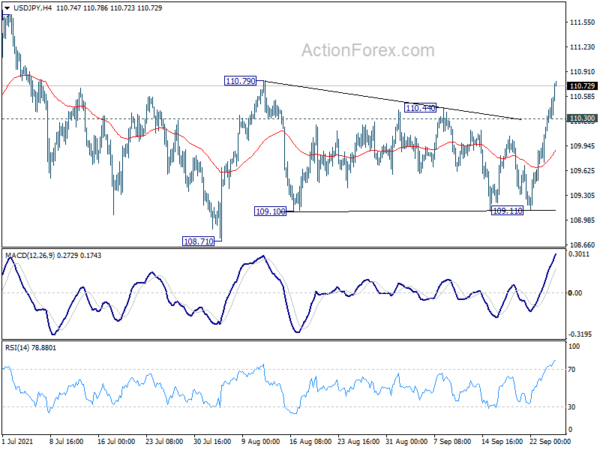 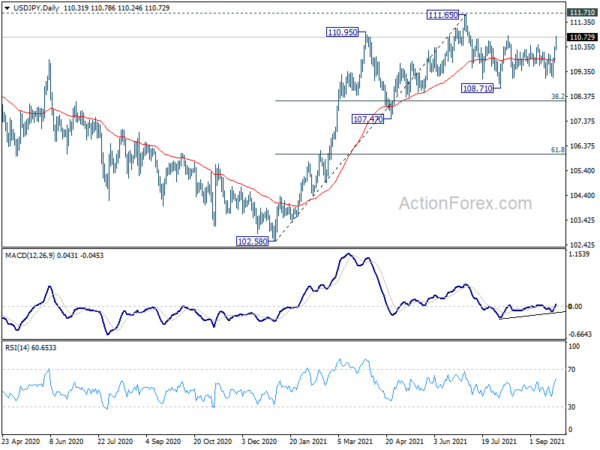 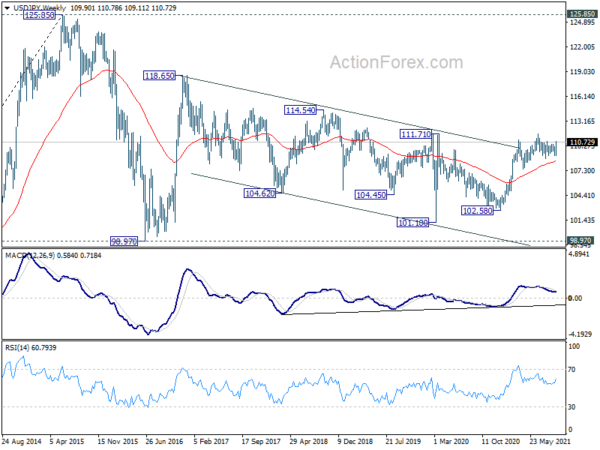 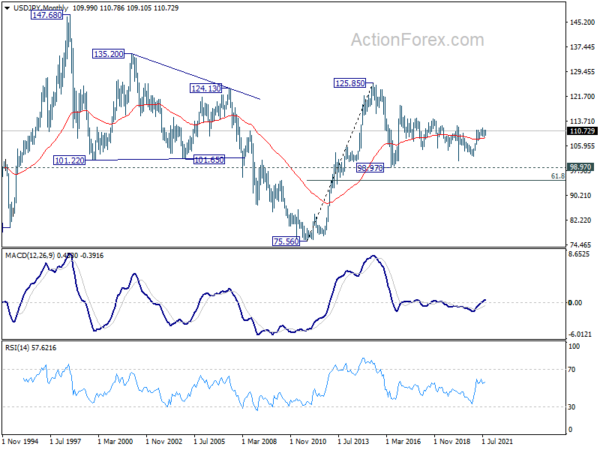