British Pound ended as the strongest major currency last week as boosted by hawkish BoE announcement. A November rate hike by BoE is now a real possibility. Kiwi ended as the second strongest in spite of some volatility ahead of generally election. Dollar followed on revived speculations of a December Fed hike. Meanwhile, Yen ended as the weakest as markets on return of risk appetite. US equity indices made records highs while strong rebounds were seen in DAX and CAC. FTSE was the exception due to BoE rate expectation. Yen is also additionally pressured as markets are back looking at diverging global interest rates.

There are a number of focuses in the coming week. Fed is widely expected to announce the plan to unwind the balance sheet. Fed Chair Janet Yellen’s post meeting press conference will be scrutinized for chance of December hike. There could be more news from US regarding tax reform as Republicans are preparing to publish the framework on the weeks of September 25. UK Prime Minister Theresa May will deliver a Brexit speech on Friday in Italy. There could be more Brexit news before negotiation starts again in the week of September 25. Germany and New Zealand will hold general elections in the weekend on September 24 and 23 respectively. BoJ will also meet but it’s likely a non-event. And of course, North Korea will be watched for any more provocations.

Sterling surged on revived expectation of near term hike

Sterling’s rally started last week after release of stronger than expected inflation data. Headline CPI re-accelerated to one year high at 2.9% yoy in August. That’s followed by data showing unemployment rate dropped to 42 year low at 4.3% in three months to July. BoE rate decision was the trend defining event for the Pound. BoE kept bank rate unchanged at 0.25% and asset purchase target at GBP 435b. Two usual hawks voted for a rate hike including Michael Saunders and Ian McCafferty. These were not surprising to the markets. However, BoE did step up it’s rhetoric and noted in the minutes that some withdrawal of stimulus should be appropriate in coming months. More in Eyebrows Raised as BOE signaled to Hike Rates in Coming Months. And that triggered speculations that BoE would hike as soon as in November. The British Pound was boosted further higher after BoE MPC member, Gertjan Vlieghe, a known dove, also turned his stance. Vlieghe said in a speech in London that "the evolution of the data is increasingly suggesting that we are approaching the moment when bank rate may need to rise."

The focus will now firstly turn to BoE Governor Mark Carney’s speech at IMF in Washington, US on Monday. UK Prime Minister Theresa May will deliver a Brexit speech in Florence, Italy on Friday. And there could be more news regarding Brexit coming out this week, ahead of the postponed fourth round of negotiation in the week of September 25. Then attention will turn to CPI data to be released on October 17. By then, it should be quite clear whether November is a good time for BoE to finally raise interest rates.

Technically, developments in Sterling were significant. GBP/USD took out 1.3444 resistance decisively and that suggests long term trend reversal. GBP/JPY also finally broke out from medium term range from 148.42 (started last December) and is resuming larger rebound from 2016 low at 122.36. EUR/GBP’s sharp fall also confirmed rejection from 0.9304 key resistance and it’s heading back to 0.8303 support. The sharp fall in FTSE should also confirm medium term topping at 7598.99. This is supported by rejection from long term channel resistance and bearish divergence condition in weekly MACD. FTSE should now head back to 38.2% retracement of 54.99.50 to 7598.99 at 6796.98 next. These developments is consistent with the expectations of a BoE hike.

Dollar ended the week as the third strongest, next to Sterling and Kiwi. But strength in the greenback is mush less convincing than that of the Pound. Dollar was lifted by news that the Americans will finally get the details of US President Donald Trump’s tax reforms in the upcoming weeks. Kevin Brady, The chief house tax writer, said the tax overhaul framework will be released in the week of September 25. And there was consensus among the so called Big Six tax writers including Speaker Paul D. Ryan, Senate Majority Leader Mitch McConnell, Senate Finance Committee Chairman Orrin G. Hatch, Treasury Secretary Steven Mnuchin, and White House economic adviser Gary Cohn. There was also optimism that Trump was changing his strategy to having more engagement with Democrats, and that could make it easier for tax reforms to go through Congress. Stronger than expected CPI readings also gave the greenback some support.

However, the picture is still far from being certain for the US. Firstly, markets seem to be still skeptical on what level of details would be released regarding the tax overhaul, not to mention the reactions from businesses and others. There are so many questions to answer before something concrete is on the table. Secondly, it looks like it’s only wishful thinking of the neutrals that Trump is having more friendly engagements with Democrats. Democrat leaders of the House and Senate, Nancy Pelosi and Chuck Schumer said after a dinner with Trump that a deal was made in principle regarding the so called Dreamers program, the DACA (Deferred Action for Childhood Arrivals ). But Trump denied it a day after. Time is needed to see whether Trump is really willing to work with the Democrats for so called "bipartisan solutions" for the good of Americans. Thirdly, geopolitical tensions with North Korea is not solved yet. Markets reacted little after North Korea fired another missile over Japan on Friday. But it should be noted that the missile traveled 3700 km before landing in Pacific Ocean. It is now proven that North Korea is able to strike Guam.

But after all, markets are starting to price in more chance of a December rate hike by Fed. According to Fed fund futures, there is now 57.8% chance of a hike in December. That compares to just 31% chance a week ago. FOMC will meet this week and without a doubt, it will announce the plan to unwind the USD 4.5T balance sheet. Fed chair Janet Yellen will also deliver a post meeting press conference. The question of whether Fed will hike in December is definitely a focus there.

Receding risk aversion and repricing of Fed hike are also reflected in the sharp rebound in treasury yield. 10 year yield TNX hit as high as 2.225 and the development suggests that correction from 2.621 is already completed at 2.034. Immediately focus will be on 55 day EMA (now at 2.204). Firm break there will affirm this bullish case and target 2.396 resistance next. A break there will raise the chance of up trend resumption through 2.621 high.

Yen dives as focus turned back to diverging rates

The weakness in the Japanese Yen last week is very clear. Returning of risk appetite provided the initial fuel for the selloff. The real trigger should be the return of theme of global monetary stimulus exit. Fed has been in that path for some time. BoC played catch up quickly in the past few months and is on track for further tightening. BoE now looks as close as ever to a rate hike finally. ECB didn’t fall too much behind neither. ECB President Mario Draghi already indicated earlier this month that the "bulk of decision on recalibration of stimulus will be made in October meeting. Furthermore, a number of ECB officials have called for cutting bond purchase last week. The news gave EUR/USD a lifted ahead of 1.1822 near term support too. With diverging global interest rates in sight, Yen and, to a lesser extent, Swiss Franc could suffer deeper selling ahead.

The weakness in Yen is clearly seen even against New Zealand Dollar. Kiwi suffered much volatility as September 23 general election approaches. The election is described as the closest contest in more than a decade. Kiwi rode a roller coaster ride last week as polls came out with no decisive prediction. Still, NZD/JPY managed to take out 80.59 resistance firmly, suggesting completion of fall from 83.90. Rise from 78.17 is now expected to extend to upper side of medium term range at 83.90. 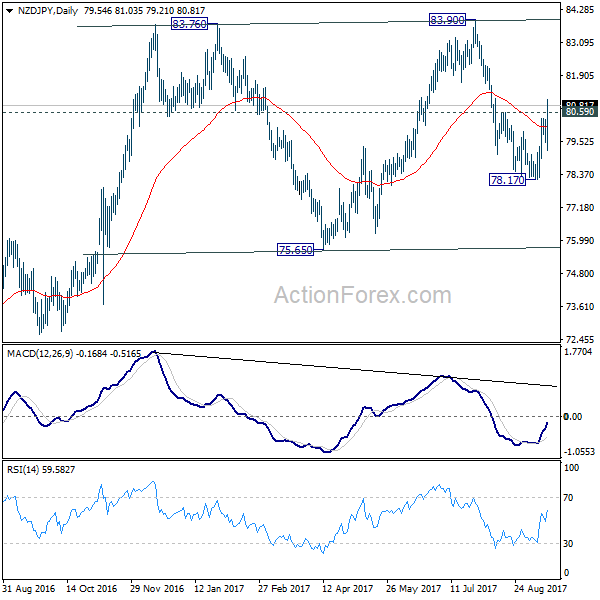 With global monetary stimulus exit back as the theme in the markets, we’d expect the Japanese Yen to stay under much selling pressure. The biggest question to this is North Korea tensions. However, the muted reaction to Friday’s missile launch argues that the markets are getting more indifferent to it. But that’s of course subject to no drastic escalation of the situation. That is, North Korea could fire any missiles to the Pacific Ocean but not really at Guam, or Japan. Therefore, we’ll look for Yen short opportunities this week.

Dollar is avoided for the moment, as firstly, there is no convincing sign of trend reversal yet. Secondly, if North Korean leader Kim Jong-Un really does something unexpected, Dollar will likely be most hurt. Sterling is avoided first as it has already run away. Euro, Aussie and Canadian can all be considered. Canadian Dollar is having a slightly upper hand against the other two as seen in both EUR/CAD and AUD/CAD. Also, WTI crude oil’s breach of 50.43 resistance last week suggests that rebound from June’s low at 42.25 might be resuming for 55.24 key resistance. 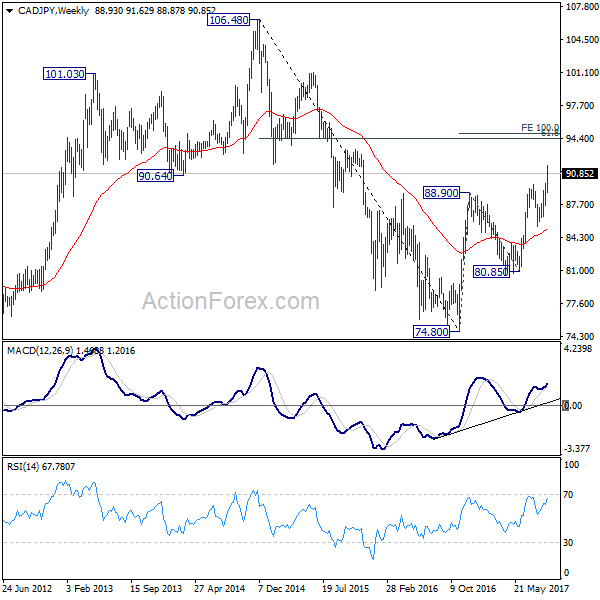 GBP/USD’s strong rally last week and firm break of 1.3444 resistance is taken as a sign of larger trend reversal. Initial bias remains on the upside this week for medium term 1.3835 support turned resistance next. On the downside, below 1.3522 minor support will turn intraday bias neutral and bring consolidations, before staging another rally. 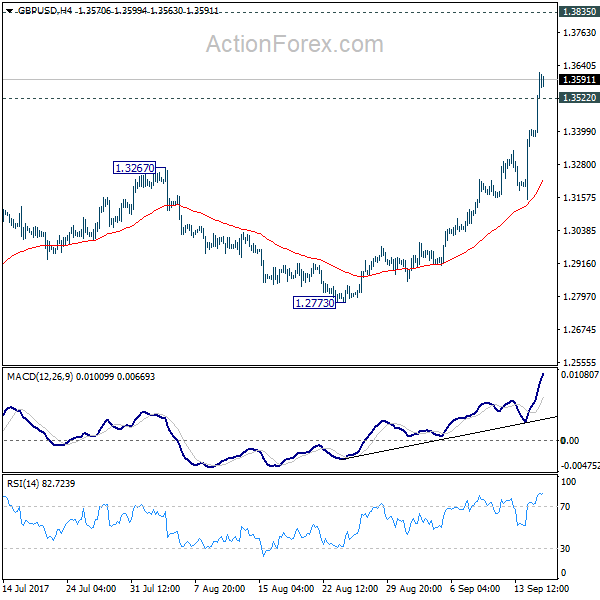 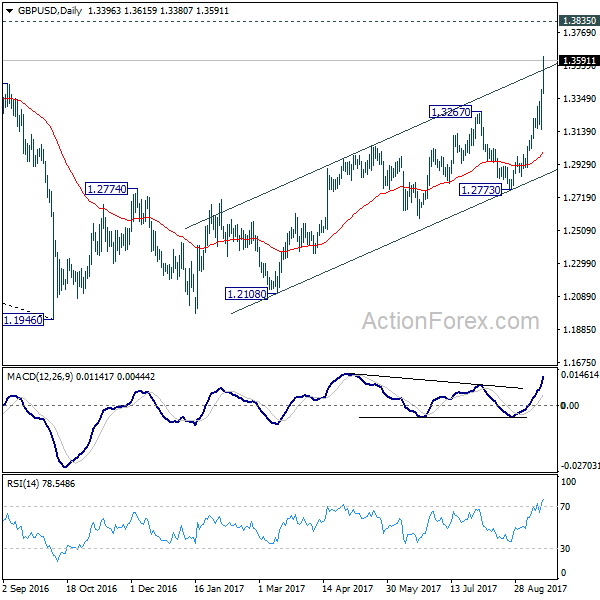 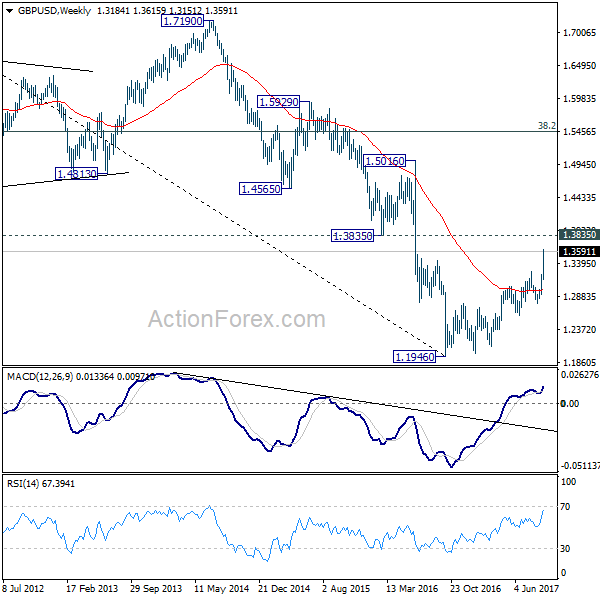 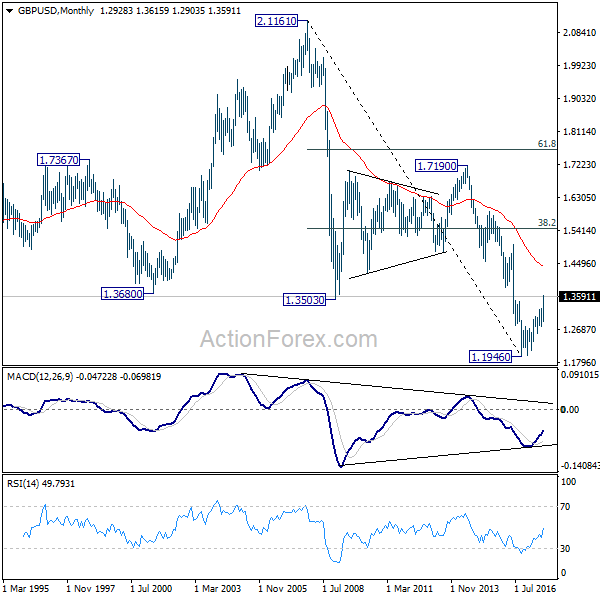