It’s a week of drama. In the UK, Liz Truss became the shortest-serving Prime Minister as political chaos continued, and the race for the next PM started immediately. In the US, stocks surged on Friday on talks that Fed could start slowing its rate hikes in December. Meanwhile, in Japan, the government waited patiently until a golden opportunity came to all-in intervene.

The net results are, Dollar ended as the worst performer, but Yen was somewhat a close second. The fact that Swiss Franc was the third weakest indicates clearly an improvement in sentiment. New Zealand Dollar was the strongest one, followed by Aussie and Loonie. Meanwhile, Euro and Sterling were just mixed, with Euro a touch better.

Markets speculating that Fed might slow tightening from December

US stocks staged a strong rally on Friday as sentiment was boosted by prospect of Fed slowing its tightening cycle. The move was triggered by a WSJ report, which said that while a 75bps hike was expected at the November meeting, policy makes might debate whether to signal openness to a smaller hike in December. 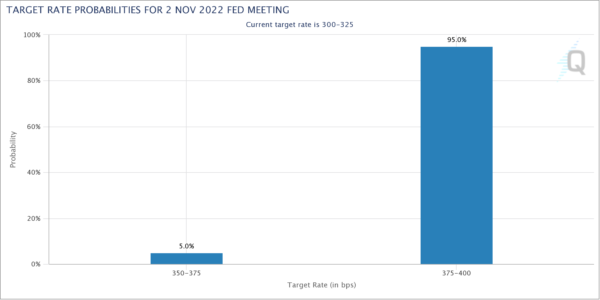 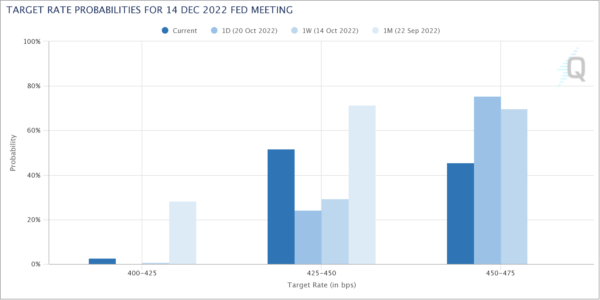 DOW broke near term resistance, not yet for S&P 500 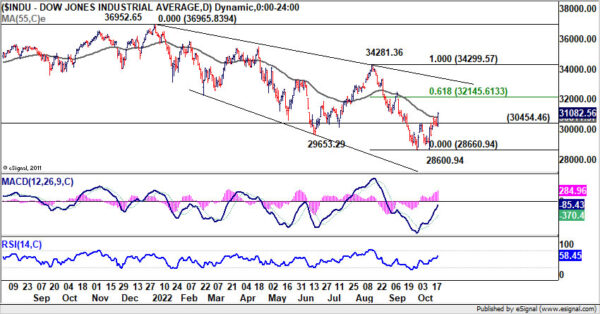 Also, it should be noted that DOW’s turn was not accompanied by corresponding development in S&P 500. That is, SPX is still hold below 3806.91 resistance and 55 day EMA. Rejection by this resistance zone will drag SPX through 3491.58 rather quickly, to resume the decline from 4818.62. If happens, that would also argue that DOW’s rebound was just an overshoot. 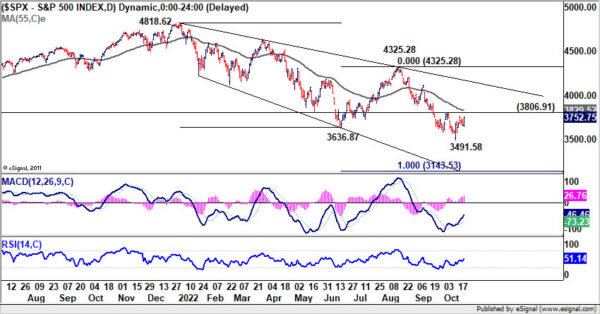 10-year yield extended recent rally and reaccelerated to as high as 4.333. But it then retreated notably on Friday, on the above mentioned news, to close at 4.213. Nevertheless, there is no change in the overall outlook. Further rise is expected to 61.8% projection of 2.525 to 3.992 from 3.568 at 4.474 next. This will remain the favored case as long as 3.992 resistance turned support holds. 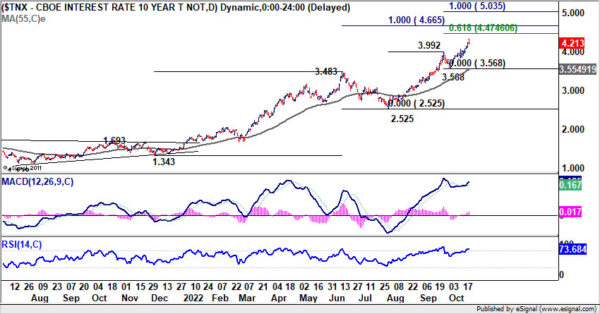 Dollar index extended the sideway consolidation pattern from 114.77, mainly because Dollar had been going nowhere except versus Yen. The impact from rising yields and stocks were counting each other. 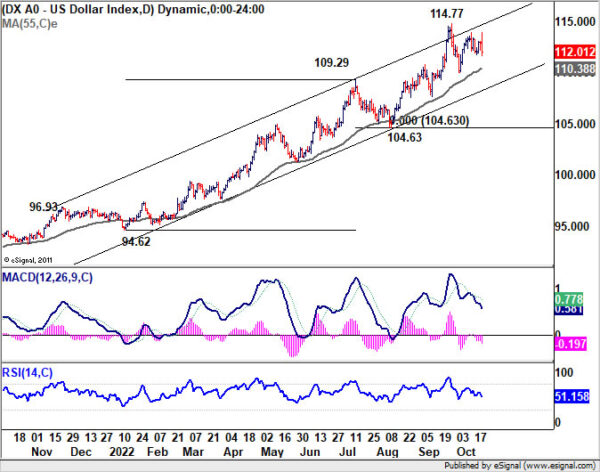 Talking about Yen, Japan played their intervention cards rather beautifully last week. There were signs of probing on both sides on 150. But buyers, or “speculators” as seen by Finance Minister Shunichi Suzuki were unmoved. Japan then kept the cards to the chest and waited patiently, while letting USD/JPY rose.

Then came the WSJ news as stocks and Dollar were starting to reverse. Japan then went all-in with intervention. This time, the so-called “speculators” turned their side and jumped in helping Japan shoot down USD/JPY. 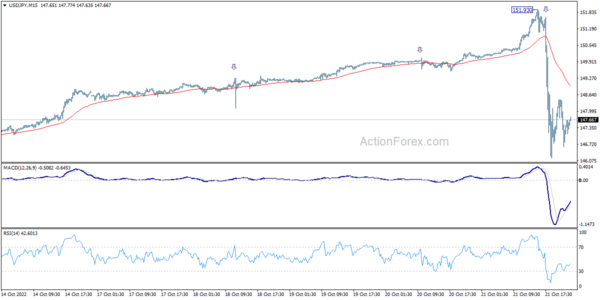 For now, USD/JPY should have turned into a consolidation phase until further development. Deeper decline and break of 145.89 resistance turned support cannot be ruled out. But the pull back shouldn’t go as far to 140.33 support. Another rebound is possible but buying would now turn very cautious above 150. As range trading continues, one might considering buying below 145 and taking profit at 150, or just ignore the pair. 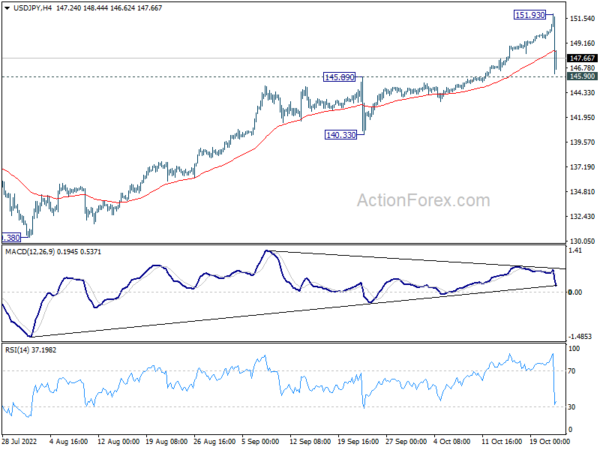 Prospect of more near term rebound in Aussie

There is prospect of further rebound in commodity currencies if sentiment does continue to improve for the near term. Australian Dollar might start to reverse some of its fortune, after being an under-performer for most of the month.

It should be noted that Aussie’s weakness, comparing to Kiwi and Loonie, came after RBA slowed down its rate hike. Yet, Deputy Governor Michele Bullock reminded people that RBA meets more frequently than others (11 times a year). And, the “policy rate trajectory has been as steep, or steeper, than other central banks”. 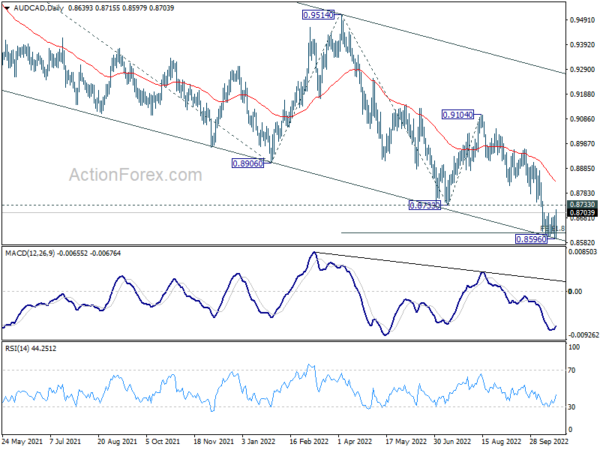 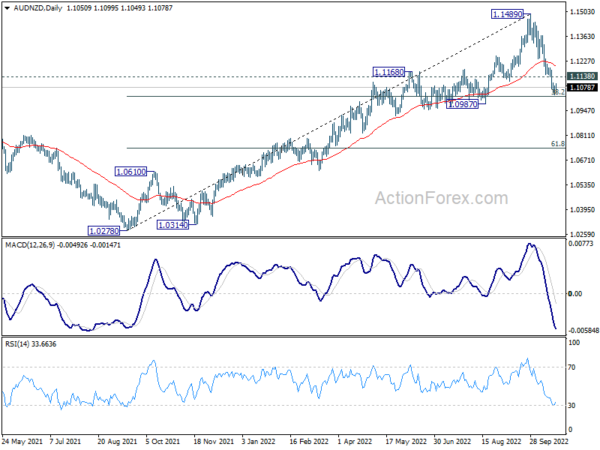 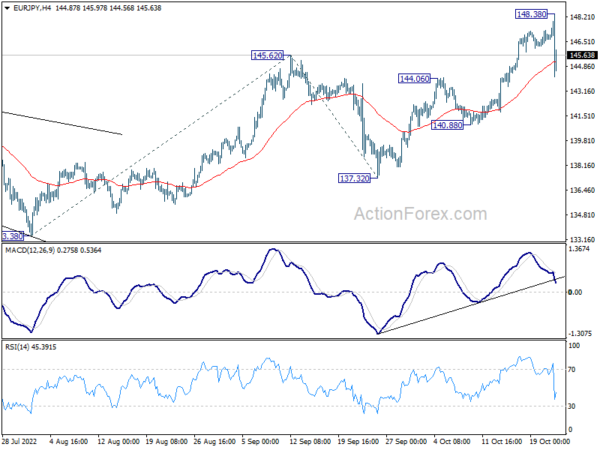 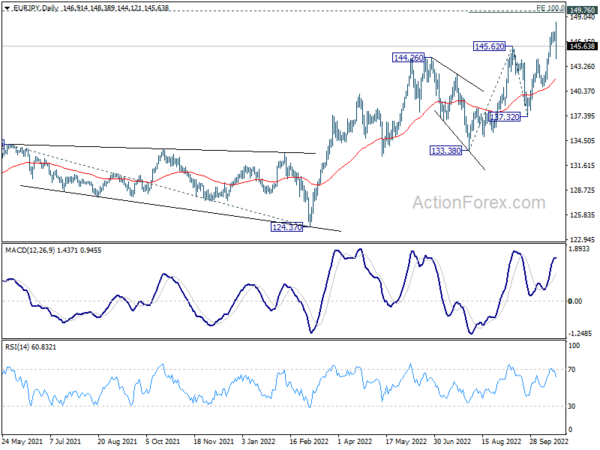 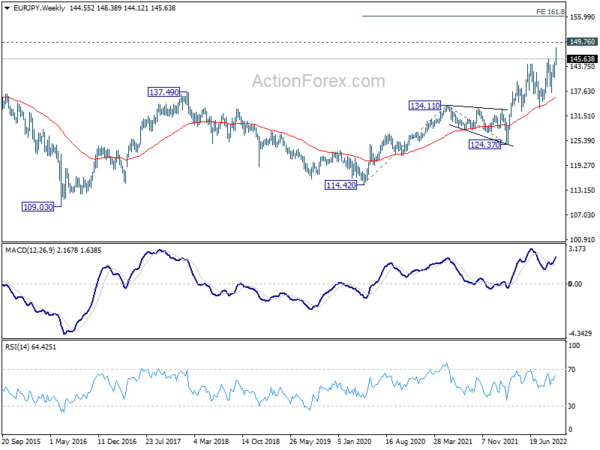 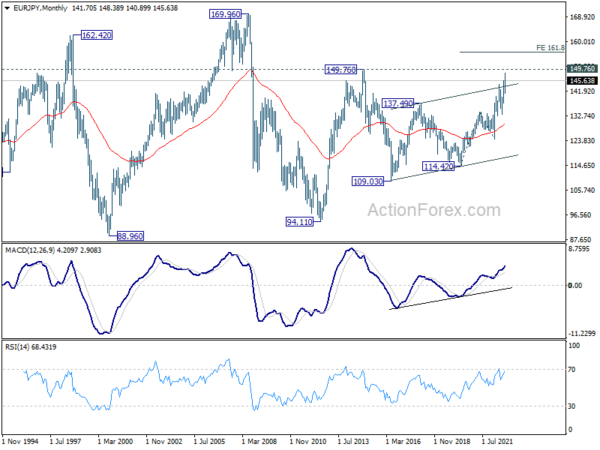