Dollar and Yields Tumbled on Sluggish Inflation, Sterling Emerged as Strongest after a Week of Roller-Coaster Ride

It has been a rather volatile week. We were partly correct in expecting strong impact from politics on the markets. But the reactions to central bank news and economic data surprised us. Dollar was clearly weighed down by FOMC minutes and CPI miss and ended as the weakest one. Meanwhile, Euro reversed early gains and ended mixed on rumors about ECB’s tapering plan. There was practical no impacts from US President Donald Trump, North Korea and not even Catalonia. Markets also ignored UK Prime Minister Theresa May. Nonetheless, politics did play a role in the extraordinary volatile in Sterling, which ended as the strongest one. Aussie and Kiwi followed as boosted by China data.

Dollar and treasury yields were under selling pressure from the slightly more dovish than expected FOMC minutes. Selloff then accelerated after CPI miss. The key takeaways of the FOMC minutes are that while Fed is still on track for a December hike, policy makers are getting more cautious regarding inflation. "members ‘continued to project that inflation would edge higher in the next couple of years". Note that the phrase ‘edge high’ is less hawkish that the term ‘increase’ used in July. And, "several" would see if the incoming economic data would increased their confidence that inflation will return to target. Also, "a few" indicated that additional increases in the federal funds rate should be "deferred" until incoming information confirmed that the low readings on inflation this year were not likely to persist.

10 year yield’s sharp fall last week argues that rebound from 2.034 has already completed at 2.402, after breaking 2.396 resistance briefly. The development also raised the chance that medium term correction from 2.621 is not finished yet. Initial bias is on the downside this week for 55 day EMA (now at 2.258) first. Sustained break there could then pave the way to retest 2.034 low.

The decline in Dollar index was less serious, thanks to Euro’s own weakness. Still, last week’s decline argue that rebound from 91.01 is possibly completed at 94.26. That’s after failing to sustain above 94.26 resistance as well 55 day EMA. Deeper decline is now in favor this week for retesting 91.01 support. Firm break there will resume medium term down trend from 103.82. Nonetheless, firm break of 93.14/26 will confirm trend reversal and turn outlook bullish.

Euro originally on track for a strong week. But it was then weighed down by report of ECB’s tapering. There was no confirmation on what the central bank would do yet as officials declined to comment. But it’s reported that ECB is going to half asset purchase target. That is, from the current pace of EUR 60B per month to EUR 30B per month, starting January. The program could extend till September while ECB would keep option open for further extension. That news was indeed consistent with what chief economic Peter Praet has repeatedly mentioned. And that’s in line with analysts expectations too. But the markets seemed dissatisfied with it. Euro ended the week mixed.

Sterling was very volatile last week on news regarding Brexit. The Pound suffered steep selloff after the fifth round of Brexit negotiations ended with "deadlocks" on the issue of the divorce bill. But it then quickly rebounded after a German newspaper Handelsblatt quoted unnamed source that EU could give a 2 year Brexit extension to UK under the conditions that the latter will fullfil all obligations as a member country. However, UK will be required to give up its voting rights.

Also, it’s reported that a draft paper was submitted to the 27 EU states by European Council President Donald Tusk. The paper indicates that free trade talks could start as soon as December. It’s near impossible that EU officials will give a "go" signal for trade discussion at the October 19/20 summit due to lack of "sufficient progress" in the negotiations. But opening up the case for start trade agreements in December could give UK the "carrots" for being more decisive on closing issues like the divorce bill.

Pound ended the week as the strongest one, surprisingly.

Strength in Sterling was followed by Aussie and Kiwi, as the second and third strongest ones. Central bank outlook shouldn’t be the driving force behind the rebound. Instead, solid China data seemed to have played an important role. China’s trade surplus surprisingly narrowed to a 6-month low of US 28.5B in September. Export grew 8.1% yoy while imports grew a stellar 18.7% yoy. The stronger-than-expected imports growth underpinned domestic economic strength. Meanwhile, China’s iron ore imports jumped 11% yoy in September to a fresh record of 103M. The previous record of 96.5M tones was made in March. The data gave a strongest boost to Aussie, and to slightly lesser extent Kiwi.

We also bought EUR/AUD on break of 1.5173 last week. But the sharp decline after failing to sustain above 1.5241 invalidates our bullish view. We’ll get out of the position at market this week.

USD/JPY’s decline last week indicates short term topping at 113.43. That was on bearish divergence condition in 4 hour MACD, after failing to sustain above medium term falling trend line. The development argues that rebound from 107.31 could have completed already. And fall from 113.43 might be another leg of medium term correction from 118.65. Initial bias stays on the downside this week for 55 day EMA (now at 111.37) first. Sustained break will target 107.31 low and below. In that case, we’d expect strong support from 61.8% retracement of 98.97 to 118.65 at 106.48 to contain downside and bring rebound. On the upside, above 112.57 minor resistance will turn intraday bias neutral first. But risk will stays on the downside as long as 113.43 resistance holds. 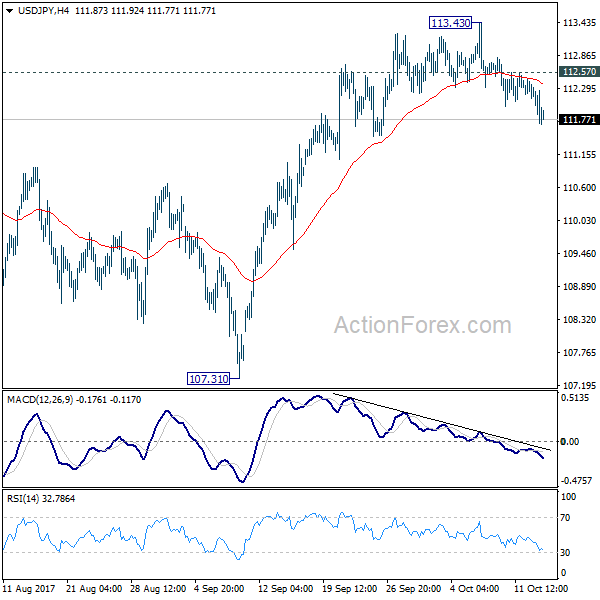 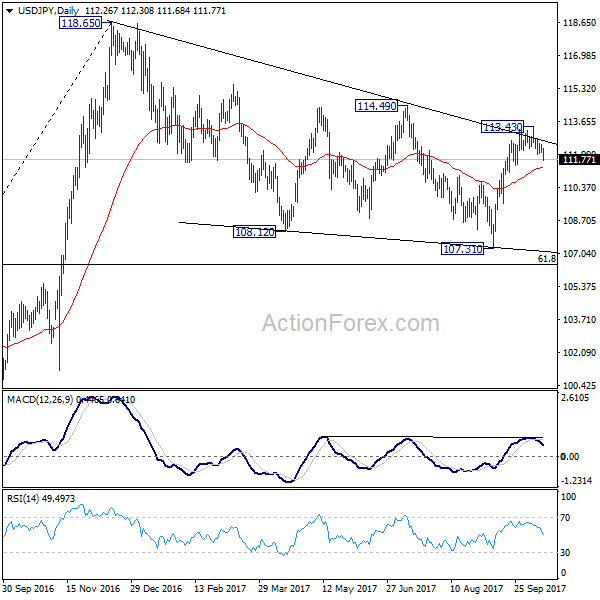 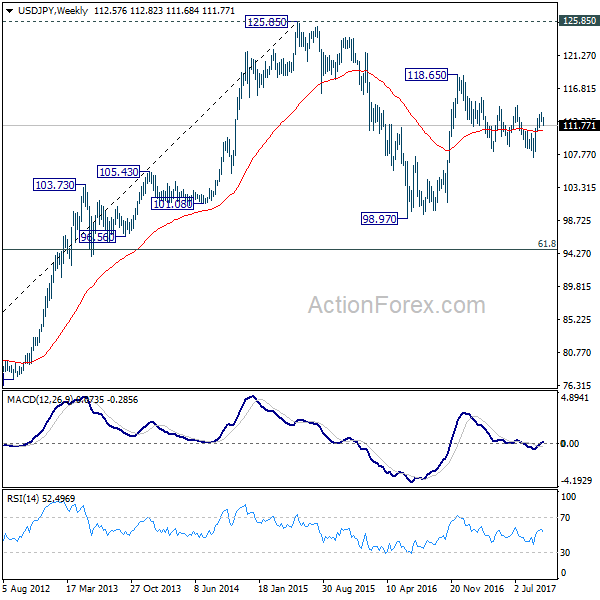 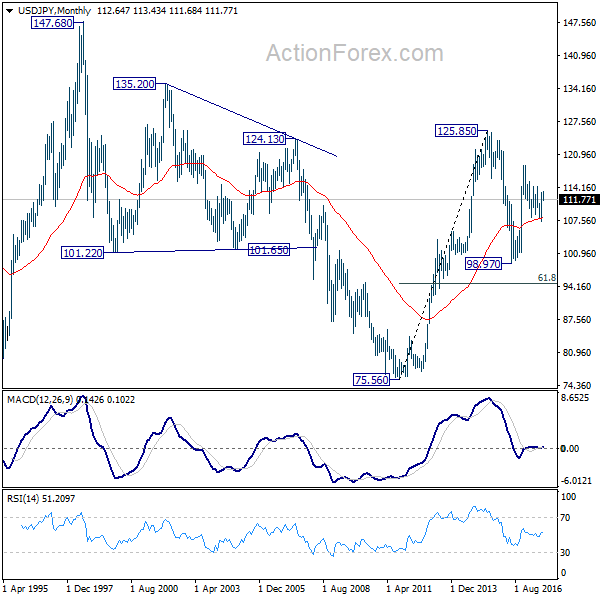