Yen maintained solid strength throughout last week as it ended as the strongest one. Meanwhile, the fortunes of commodity currencies suddenly reversed towards the end. Canadian, Australian and New Zealand Dollar ended as the three weakest ones. Some blamed the selloff in commodity currencies to Dollar’s strength. But the greenback just ended marginally higher against Euro and down against Yen and Sterling. US long term yields weakened, in particular in 30 year yield. Dollar index stayed in range well below 91 key resistance handle. While markets increased their bets on a Fed rate hike this week, they’re paring bets on a June hike. So, traders dumped commodity currencies for some other reason. And we believed it’s because of trade war on these countries.

Recent developments clearly showed that US President Donald Trump is stepping on his protectionist acceleration pedal. Following the departure of globalist White House economic advisor Gary Cohn, another one Secretary of State Rex Tillerson was fired last week. Larry Kudlow was appointed to replace Cohn. Some people focused on his comment of “buy King Dollar” in the CNBC interview as the market mover. But indeed, it was his comments of “China needs a comeuppance on trade” that moved markets.

In the background, it’s reported that Trump is going to make use of the so called Section 301 intellectual property investigation report as a reason to impose tariffs on Chinese products. And he has ordered Trade Representative Robert Lighthizer to come up with a plan of USD 60b a year of tariffs on China. The plan could be announced as soon as this week. At the same time, China was making itself ready for retaliation measures. Considering the close link between China, Australia and New Zealand, the latters will be deeply affected if a US-China trade war starts.

On other hand, Canadian Dollar was firstly weighed down by BoC Governor Stephen Poloz’s caution that rate hikes might as come as quick as the markets thought. Additionally, outlook is heavily clouded by the lack of progress in NAFTA renegotiation. Mexican Economy Minister Ildefonso Guajardo once expressed his frustration that NAFTA will continue with Canada and Mexico, but could be without the US.

The markets continued to firm up expectation for a 25bps rate hike by Fed this week to 1.75%. Fed fund futures are pricing in 94.4% chance for that. Released from the US last week, headline CPI accelerated to 2.2% yoy in February, up from 2.1% yoy. Core CPI was unchanged at 1.8% yoy. The data provided no obstacles for Fed’s decision. Voting and Fed’s new economic projections would be the key focuses though. In particular, known dove Chicago Fed Charles Evans might vote against the hike. The famous dot-plot could also reveal whether Fed officials have shifted their base case from three hikes to four hikes this year.

However, at the same time, expectations for another 25bps hike in June has decreased. to 74.8%, down from 77.6% a week ago. While it’s admittedly only a slight downside adjustment in pricing, it could be seen as a sign of worry in the markets, which could also be reflected in the sharp fall in 30 year yield. Political uncertainty in the White House, as well as the risks of trade war could be quietly weighing on Fed expectations.

Some people said that dollar was strong last week but that’s not what we saw. The greenback closed down against Yen and Sterling which were the strongest ones. EUR/USD, while closed in red, is still hold on to 1.2268 minor support to maintain near term bullishness. Much more is needed for the dollar to prove its strength.

The dollar index too, struggled in tight range last week and was held below 91.01 key near term resistance. It’s indeed even kept below 55 day EMA (now at 90.46). There is no clear indication of trend reversal yet even the index is trying to draw support from 50% retracement of 72.69 to 103.82 at 88.25. Medium term down trend is still in favor to extend to 61.8% retracement at 84.58. We’d have to see a sustained break of 91.01 resistance turned support for confirming medium term bottoming.

BoE and Brexit transition deal for Sterling ahead

Sterling has been very resilient in the time of global market votaility. It ended last week as the second strongest following Yen. But it’s bounded is February’s range against all except commodity currencies. The coming week will be big for the Pound with CPI, BoE and EU summit scheduled.

Is BoE expected to change interest rate or asset purchase? No. Is anyone expected to dissent the decision? No. Is there new economic forecasts? No, as they were published in the February Quarterly Inflation Report already. Would BoE turn less cautious on the outlook? No, as the outlook hinges on Brexit negotiation and there won’t be news regarding the transition deal before BoE announcement. So, the BoE rate decision could turn out to be a business as usual non-event.

Meanwhile, UK is expected table the legal text for the Brexit transition deal to EU during the summit starting March 22. It’s hopeful that the transition deal would be approved. However, as some reported, the deal could be nothing more than political agreement, without details, nor clarity. And business would still be kept in dark on what they could expect next and continue to waste time and efforts on contingency.

The issue of Irish border is clearly the main issue now. And EU’s position is quite clear. Without a solution on Irish border by Autumn, the negotiation could collapse. Without a Brexit deal, there is no point for a transition deal. Intensive talk is planned between March 26 and April 18 on the issue. But that’s a story after next week. 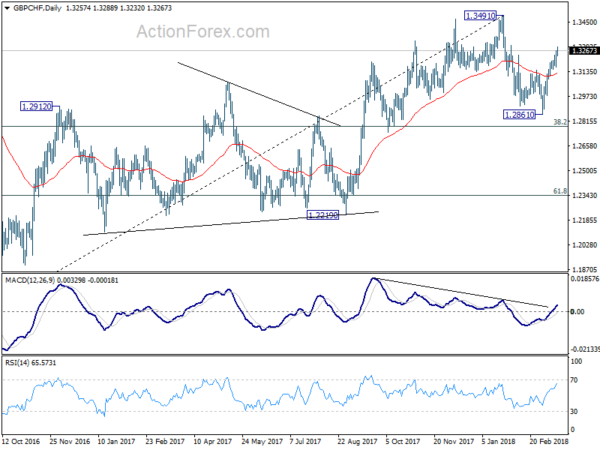 For now, we’re not expecting commodity currencies to come back easily. But there are still some important data and events that could change their relatively strength. The list to watch include RBNZ rate decision, RBA minutes, Australia employment, Canada CPI and Canada retail sales. RBNZ shouldn’t change monetary policy nor its neutral tone. RBA will also likely pains a neutral picture. Australia and Canadian data would likely be the more market moving ones.

Comparing Aussie and Canadian, AUD/CAD extended recent rise to as high as 1.0241 last week but dropped sharply on the late selloff in Aussie. Pull back from 1.0241 might extend deeper in near term. But still, price actions from 1.0396 are viewed as a corrective pattern. It’s either in form of a three wave pattern that’s completed at 0.9570, or a five wave triangle with fall from 1.2041 as the final leg. In either case, range breakout should be around the corner for resume the rise from 0.9148 towards 1.0784 high. 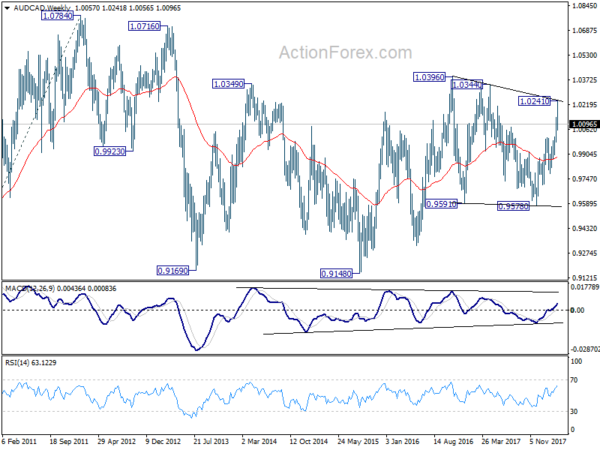 AUD/NZD is staying in the medium term down trend from 1.1289. Recent consolidation was limited below 55 week EMA, thus maintaining bearishness. Weekly MACD could also be breaking its trend line. Hence, deeper decline is expected through 61.8% retracement of 1.0234 to 1.1289 at 1.0637, probably soon. But since the overall price actions from 1.0016 low are corrective looking, we’d expect loss of downside momentum as the cross approaches 1.0234 key support. 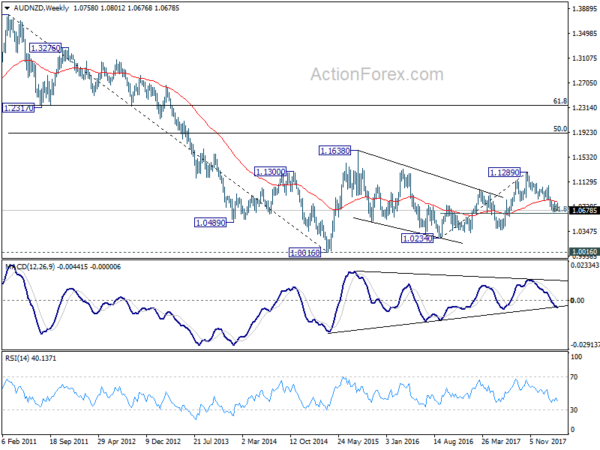 AUD/USD’s rebound was limited at 0.7915 last week and reversed. Subsequent sharp fall and break of 0.7712 support indicates resumption of whole decline from 0.8135. Initial bias stays on the downside this week for 0.7500 key support next.

One of the interpretation of recent price actions is that price action from 0.7758 to 0.7915 were a three wave consolidation pattern. If that’s true, the fact that 0.7712 was well below 0.7758 indicates strong selling pressure even inside that consolidation. That is, decline from 0.7915 would then be a very powerful move that could takes out 0.7500 easily. We’ll keep an eye on it to see if there is any further downside acceleration ahead.

On the upside, above 0.7769 minor resistance will turn intraday bias neutral first. But outlook will remain bearish as long as 0.7915 resistance holds.

In the bigger picture, medium term rebound from 0.6826 is seen as a corrective move. It might still extend higher but we’d expect strong resistance from 38.2% retracement of 1.1079 to 0.6826 at 0.8451 to limit upside to bring long term down trend resumption. On the downside, break of 0.7500 support will now be an important signal that such corrective rebound is completed. 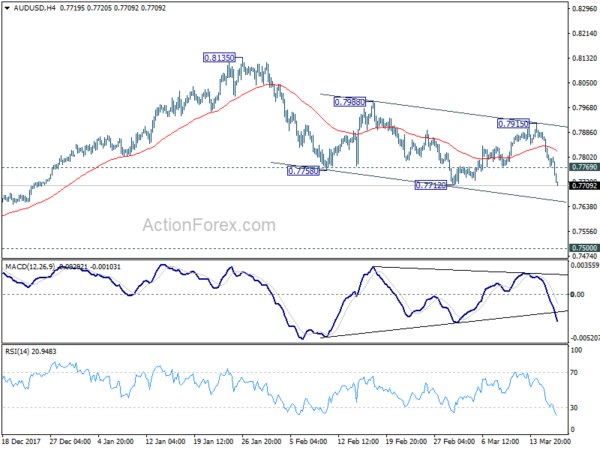 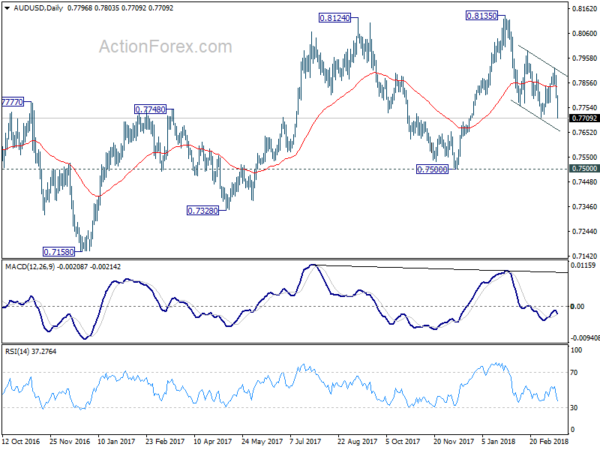 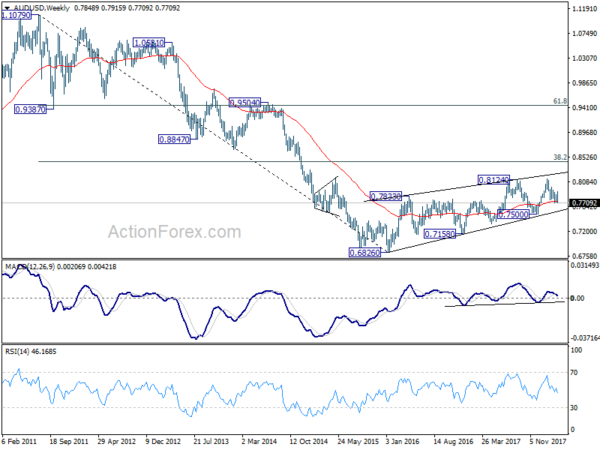 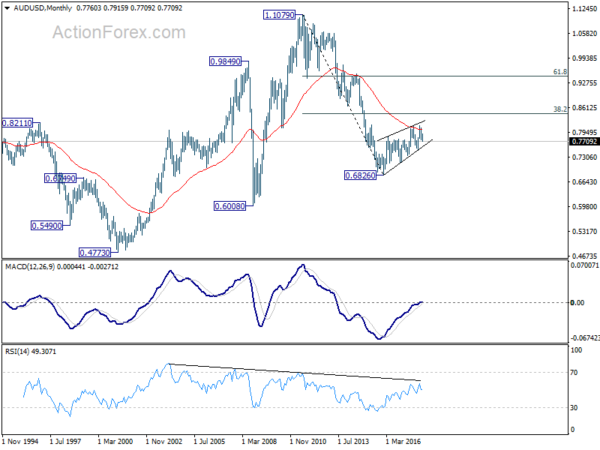