Global stock markets suffered steep selloff last week as US President Donald Trump has finally declare the start of trade war with China. Dollar was under broad based pressure with the development, but it was only the second weakest one. Australian Dollar suffered most for it’s close trade link to both countries. New Zealand Dollar ended as the third weakest, also for its trade link with China.

For Dollar, Fed’s widely expected rate hike was not enough to give it any upside momentum. Firstly, Fed kept the forecast of total of three hikes in 2018 unchanged. Secondly, while GDP forecast for 2018 and 2019 were revised notably up, that for 2020 was left unchanged. It indicated Fed officials don’t expect Trump’s tax cut to have a long lasting effect on the economy. At the same time, core inflation forecast for 2019 and 2020 were revised up by 0.1% only.

Yen gained a lot towards the end of the week on risk aversion. But it was Canadian Dollar that’s the strongest. The Loonie was firstly supported by positive news on NAFTA renegotiation, as US dropped one of the toughest protectionist demand. That is, the request for vehicles made in Canada and Mexico for export to the US contain at least 50% US content ad dropped. Secondly, Canadian inflation data came in stronger than expected. Both boosted the chance of another BoC hike in first half.

Sterling was the second strongest one as UK has finally secured the Brexit transition deal with EU. However, it failed to extend the gains after BoE rate decision. BoE left bank rate unchanged at 0.50% as widely expected. Two known hawk Michael Saunders and Ian McCafferty came out dissenting and voted for rate hike. But there was a lack of acknowledgement of progress in Brexit negotiation. While BoE could still hike in May, this week’s development didn’t make it more likely to do so.

On Thursday, Trump announced to impose tariffs on USD 50-60b of Chinese imports, as follow up action to the so called Section 301 intellectual property investigation. The targeted measure on China was seen by the world as declaring trade war. China’s reactions were so far retrained. On Friday, China’s Ministry of Commerce announce retaliation measure to the 232 steel and aluminum tariffs of the US. And that include imposing tariffs on USD 3b of US imports in two stages.

For now, the announced measures by both country would have little impact on each other’s economies, as seen by economists. But firstly, it should be remembered that the 232 steel and aluminum tariffs were across the board. China’s counters measures to something that’s target to itself could be totally different. So far, there was only verbal complaints regarding the Section 301 tariffs, China is holding their cards to chest. Secondly, there are generally worries that it’s now only Season 1, Episode 1 of trade. More is to come and the situation will only turn from bad to ugly.

Talking about 232 steel and aluminum tariffs, Trump approved temporary suspension to Argentina, Australia, Brazil, Canada, Mexico, EU and South Korea, till May 1, 2018. We’ll repeat here that adding together, these seven countries/bloc contributed to 52.7% of steel import to the US in 2017. And, two of the US’s closely allies in east Asia, Japan and Taiwan, were not exempted.

DOW’s steep selloff of Thursday and Friday now clearly indicates that the correction from 26616.71 high is resuming. A few weeks ago, after DOW recovered from 23360.29 extended despite solid US CPI reading, we said that the worst in stocks were over. That’s indeed not too wrong as the worst about Fed tightening was over. This was also reflected in stock’s reaction to Fed’s rate hike last week. And remember, Fed did signal it’s on track for three hikes this year, and three next. But then the worst is indeed not over yet as trade war came to haunt investors. Judging from current momentum, the markets took the negative impact of trade war much more badly than Fed tightening.

Reactions in the bond markets last week were relatively muted. 10 year yield attempted to take out recent resistance at 2.943 after FOMC. But then reversed the gains on Thursday. Nonetheless, TNX stayed in range between 2.80 and 2.95. While deeper fall could be seen, we’re expecting strong support from 38.2% retracement of 2.034 to 2.943 to contain downside.

In the biggest picture, it now looks like there won’t be any momentum to push TNX through 3.036 key resistance in near term. But, it should be remembered US debt to China is at USD 1.17T as of January 2018. That’s 19% of the USD 6.26T in US debts held by foreign countries, largest among them. If dumping US debt is part of China’s retaliation measures, then this 3.036 resistance would be nothing.

While Dollar was the second weakest major currency last week, next to Aussie, the dollar index didn’t perform too badly. That’s mainly because Euro was strong neither. Outlook stays bearish with 91.01 support turned resistance intact. Based on current development, the falling 55 day EMA could finally press dollar index through 88.25 low to resume the down trend from 103.82. In that case, dollar index would try to draw support from 61.8% retracement of 72.69 to 103.82 at 84.58 to form an important bottom.

USD/JPY dropped to as low as 104.63 last week and the break of 105.24 support confirms resumption of decline from 114.73. Such decline is viewed as the third leg of the medium term pattern from 118.65. Initial bias remains on the downside this week for 104.20 projection level first. Sustained break there will pave the way to 98.97 (2016 low). On the upside, break of 106.63 resistance is needed to indicate short term bottoming. Otherwise, outlook will remain bearish in case of recovery. 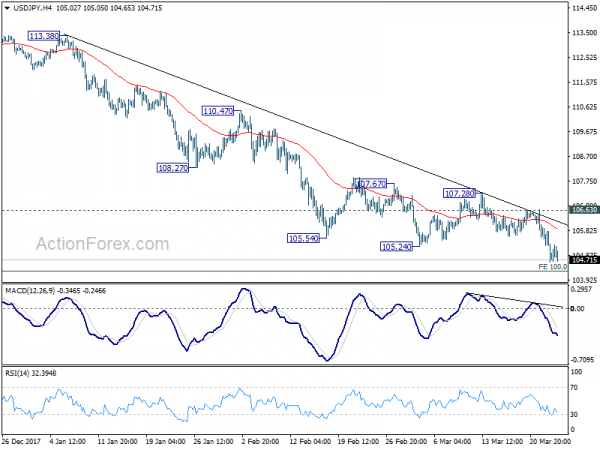 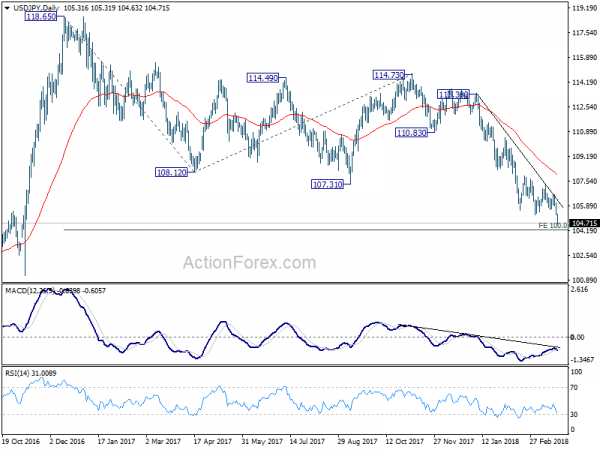 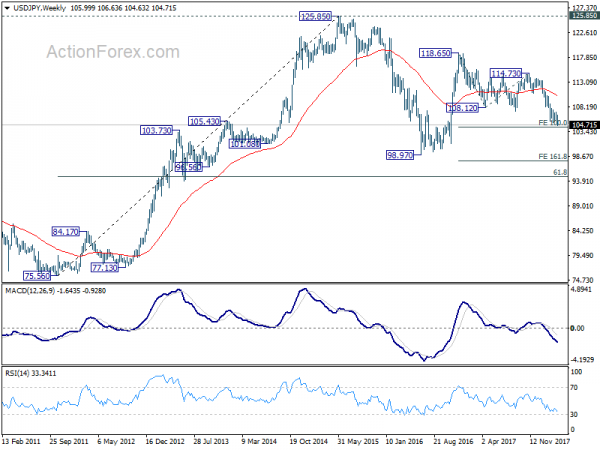 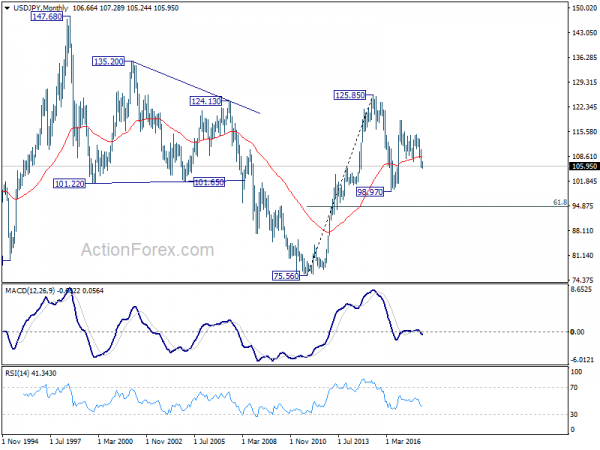