U.S. and China Fire Shots Across The Tariff Wall

The U.S. administration has gone from targeted tariffs on solar panels, washing machines, steel, and aluminum to a 25% ad valorem tariff on at least US $50 billion in annual imports from China. The latter followed the conclusion of a Section 301 investigation that China’s actions have violated the intellectual property rights of U.S. firms.1 Although the specific details are expected to be announced within the next fifteen days, focus has been placed on the imports of aerospace, information and communication technology, and machinery. In addition to the tariffs, the U.S. will file a trade dispute with the WTO and will likely impose investment restrictions on Chinese firms that seek to acquire sensitive technology.2

This announcement does not come as a surprise. The U.S. administration has been very vocal about its displeasure with the size of its trade deficit, and has singled out China as a major contributor (Chart 1). The U.S. trade deficit with the world was estimated at about US $800 billion in 2017, and its deficit with China was the largest at $375 billion. Moreover, the targeted import categories are ones China hopes to gain greater global market share, as it works to move the manufacturing sector up the value-chain over the next decade.3 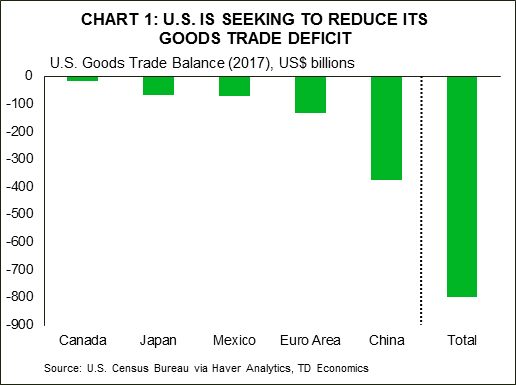 As widely anticipated, China followed up with its own threat to levy tariffs against U.S. goods in retaliation for steel and aluminum tariffs that take effect today. The Ministry of Commerce announced 15% tariffs on U.S. steel pipes, fruit, wine and other products, and a 25% tariff on pork and pork products, and recycled aluminum.4 This hits about $3 billion in U.S. goods on an annual basis. More specifically, these tariffs target U.S. food exports of fresh fruit, dried fruit and nuts, wine, denatured ethyl alcohol, and American ginseng.

The $3 billion retaliatory tariffs by China may serve three purposes. First, it’s a credible shot across the bow from a country that has retaliated in the past to unilateral, U.S.-imposed tariffs. Second, the relatively small size of their initial tariff response could signal a willingness to move forward with dialogue. On that note, the U.S. administration also appears willing to continue to negotiate issues concerning U.S. intellectual property. Third, noticeably absent from China’s tariff list are more politically sensitive items such as soybeans, sorghum, and airplanes, all of which are top U.S. exports to China. The Chinese government may be holding back on these initiatives to ensure leverage. In the event that dialogue fails, we may yet see a second round of Chinese tariffs launched on American industries in response to the latest initiatives by the U.S. administration.

So, although the intent to levy tariffs has now officially been announced by both parties, it’s still unclear the extent to which action will be taken. For example, since the steel and aluminum tariffs announced fifteen days ago, suspensions have been granted to Argentina, Australia, Brazil, Canada, Mexico, the European Union, and South Korea until at least May 1, 2018.5 As evidence of the tactical play of U.S. initiatives, open-ended exemptions initially granted to Canada and Mexico have now been given the same deadline, no doubt to expedite NAFTA resolution.

Perhaps the greatest threat at this stage to the economic outlook is not from the direct economic feedthrough of tariffs to prices, jobs and output, but the possible erosion of business confidence from an ever-shifting playing field. The rapid-fire of U.S. tariff measures coupled with intensification in stock market and currency volatility certainly muddy the business climate and economic outlook. 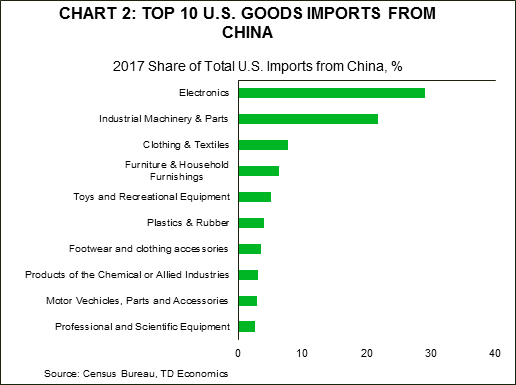 Along this vein, nailing down precise estimates of the economic impact of the new U.S. tariff announcement is difficult given the lack of specificity on Chinese products. However, we do have enough information to come up with some broad strokes (see Box 1 for methodology).

The U.S. imported about $506 billion in goods from China last year, equivalent to 21.6% of its total imports from the world. About half were imports from the aerospace, information and communication technology. The $50 billion of imports targeted is 9% of total imports from China, and 2.1% of total U.S. imports from the world. In isolation, this would not have a large direct economic impact on the U.S. economy. However, U.S. supply chains depend upon Chinese produced goods, so the indirect effects could materially boost the estimated impacts presented below, particularly if the tariffs are concentrated in the information and communications technology sector (Chart 3). In addition, these tariffs are coming on top of the steel and aluminum tariffs, and it’s the layering of cost pressures through supply chains that bring a greater degree of forecast uncertainty. Below, we estimate only the most recent announcement, and the steel and aluminum impacts can be found here. 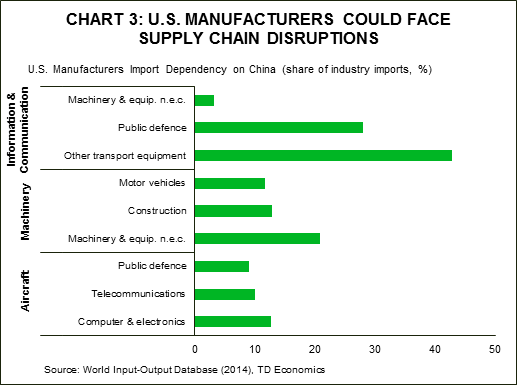 Price impact (inflation): The tariffs target largely investment goods, which are amortized over time so are likely to have a subdued response on the medium-term inflation outlook. Overall, our analysis suggests that the announced U.S. tariffs could boost annual inflation by 0.1 to 0.2 percentage points.

Growth impact (real GDP): Higher import prices could act to slow economic activity as U.S. industries dependent upon affected Chinese suppliers adjust. The impact on annual growth could average about -0.1 percent, for a cumulative level shock to U.S. real GDP of about -0.2% after 5-qtrs relative to baseline. After the initial adjustment period, a rebound in economic activity begins.

The countervailing duties announced by China targeting about $3 billion in annual U.S. exports are not expected to have a material impact on U.S. economic activity.

Layering these tariff impacts on top of our impact estimates of the aluminum and steel tariffs, we anticipate that the tariffs announced over the past two weeks combined could add an additional 0.2 percentage points to annual inflation.

Spillovers to other nations: The imposition of tariffs further elevates economic policy uncertainty globally. This could slow business investment, global trade, and exacerbate financial market volatility. Moreover, although the details are still forthcoming, integrated global supply chains all but guarantee that other major U.S. trade partners could face collateral economic damage from these tariffs. The U.S. is likely to pressure Canada and Mexico to limit the amount of Chinese goods that leak across its Northern and Southern borders that are tariff free. This may result in additional country of origin restrictions imposed as part of a revised NAFTA agreement.

Monetary policy implications: The timing could not be worse for the Federal Reserve. The U.S. economy is already starting to see inflationary pressures build across various measures, and the risks are further elevated by fiscal stimulus and tariffs (Chart 4). A broadening out of price pressures could give the Federal Reserve more conviction to remove monetary stimulus. Although a 0.2% shock to the price level after 12-qtrs in isolation is not sufficient to prompt the fed to raise rates at a faster pace, it is the stacking up of price pressures from multiple sources that is a greater concern. 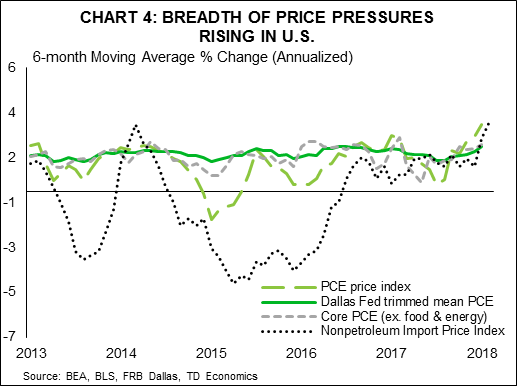 Impact on China expected to be small

China’s efforts to rebalance its economy over the last few years have helped make it less dependent on exports. In fact, exports as a share of nominal GDP has fallen to 18% in 2017 from a peak of 35% in 2006. Over that same period, China’s economy has shifted towards more domestic services, with tertiary industries rising to 52% of nominal GDP last year, up from 42% in 2006.

That said, if the tariffs do indeed result in a material decline in exports (assuming limited leakage into the U.S. through other trade partners), a decline in exports could still work to shave about 0.1 percentage points off of annual Chinese GDP growth, and may lead to domestic job losses. Any escalation from here could force Chinese authorities to delay plans to address high debt levels that have elevated financial stability risks. A return to investment heavy, credit driven growth would only act to exacerbate these concerns.

Next steps and Risks to the Global Economy

The relatively subdued response of Chinese authorities and the willingness of both sides to engage in dialogue to resolve trade disputes offer some encouragement that an all-out escalating global trade war can be averted. Chinese authorities have recently voiced a more conciliatory tone on intellectual property, citing an ongoing commitment to open its economy to foreign investment without the requirement for firms to share their intellectual property with domestic industries.

Nevertheless, this latest announcement by the U.S. administration could be followed up by more targeted action. President Trump said that he would like Chinese authorities to reduce its trade deficit with the U.S. by $150 billion. Moreover, Congress is contemplating reducing visa issuance to Chinese students. Further escalation could see more potent Chinese retaliation, with detrimental knock-on effects to the U.S., Chinese, and global economy.

Any economic text book, or general common sense, argues that both economies will be on the losing end of this trade war. But, this isn’t purely about economics. It’s politics. Unintended consequences can easily emerge in this game of chicken. For the U.S., this may come in the form of unwinding the goodwill to business confidence and investment that previously stemmed from tax cuts. Having more cash to invest doesn’t equate to a willingness to invest if the landscape becomes uncertain and shifts too quickly. For global trade partners, collateral damage can certainly weigh on the synchronous economic upturn that was established last year. For emerging markets, uncertainty can embed greater bouts of financial market volatility, with capital seeking safety and thereby jeopardize growth in these vulnerable markets.