The SNB is tightening its monetary policy and is raising the SNB policy rate and the interest rate on sight deposits at the SNB by half a percentage point to −0.25% to counter increased inflationary pressure. The tighter monetary policy is aimed at preventing inflation from spreading more broadly to goods and services in Switzerland. It cannot be ruled out that further increases in the SNB policy rate will be necessary in the foreseeable future to stabilise inflation in the range consistent with price stability over the medium term. To ensure appropriate monetary conditions, the SNB is also willing to be active in the foreign exchange market as necessary.

The SNB policy rate change applies from tomorrow, 17 June 2022. With effect from 1 July 2022, the SNB is also adjusting the threshold factor used to calculate the level of banks’ sight deposits at the SNB exempt from negative interest. The factor will be lowered from 30 to 28. This will ensure that the secured short-term Swiss franc money market rates are close to the SNB policy rate.

Inflation reached 2.9% in May and is likely to remain at an elevated level for the time being. The SNB’s new conditional inflation forecast is based on the assumption that the SNB policy rate is −0.25% over the entire forecast horizon. The new forecast for the next three years is above that of March (cf. chart 1), and stands at 2.8% for 2022, 1.9% for 2023, and 1.6% for 2024 (cf. table 1). Without today’s SNB policy rate increase, the inflation forecast would be significantly higher. 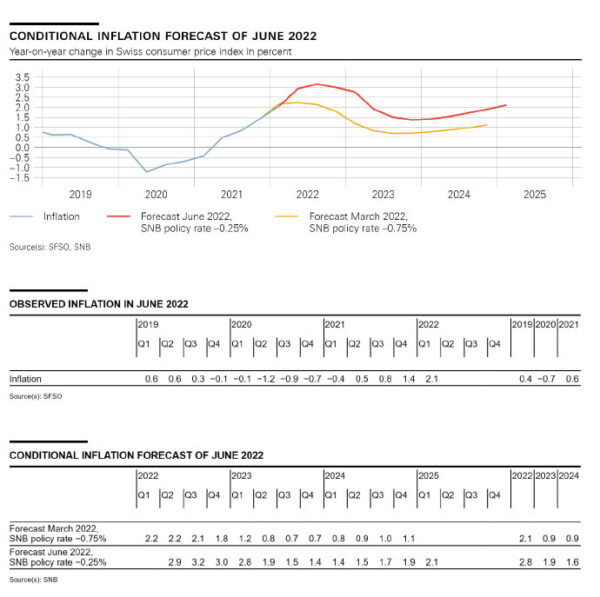 Global economic growth has slowed markedly recently. This slowdown is on the one hand attributable to the high level of inflation, which is weighing on purchasing power and thus reducing demand. On the other hand, the uncertainty stemming from the war in Ukraine as well as the coronavirus lockdowns in China are curbing the development of the global economy.

Since March, there has been a further considerable and broad-based increase in inflation in many countries. The war in Ukraine has been a significant factor here, too, in that the prices of many commodities have risen as a result. In addition, persisting supply bottlenecks have led to further price increases for various goods.

In its baseline scenario for the global economy, the SNB assumes that energy prices will remain high for the time being, but that there will not be an acute energy shortage in the major economic areas. The positive development of the economy should thus continue overall. Owing to the increased prices for energy and food, coupled with the supply bottlenecks, inflation is likely to remain high for some time. However, the importance of these factors should diminish over the medium term. With monetary policy also becoming increasingly tighter in many countries, inflation is likely to gradually return to more moderate levels.

This scenario for the global economy is subject to significant risks. For example, inflation could rise further and thus weigh even more heavily on real incomes and consumer demand. At the same time, high inflation could become entrenched as a result of increased second-round effects, requiring stronger monetary policy responses in other countries. Finally, there are still important downside risks to growth from the war in Ukraine and the pandemic.

The Swiss economy has continued the favourable development it has shown since the beginning of the year. After modest growth in the fourth quarter of 2021, GDP increased by just under 2% in the first quarter of this year. The signals remain positive for the current quarter. The situation on the labour market has also continued to improve.

The war in Ukraine has thus far had comparatively little adverse impact on economic activity in Switzerland. The effect has been most clearly felt in the higher energy prices and in the supply bottlenecks.

For 2022, the SNB still anticipates GDP growth of around 2.5%. Unemployment is likely to remain low. This favourable forecast is based, among other things, on the assumption that the global economy continues to grow and that the war in Ukraine does not escalate further.

The forecast for Switzerland, as for the global economy, is subject to large risks. If the energy supply in Europe were to be adversely affected, this could have a serious impact on the Swiss economy. The global supply bottlenecks and further increases in commodity prices could also slow growth. Furthermore, a resurgence of the coronavirus pandemic cannot be ruled out.

Mortgage lending and residential property prices have risen further in recent quarters. The SNB will continue to monitor developments on the mortgage and real estate markets closely.

More detailed information on the monetary policy decision can be found in Thomas Jordan’s introductory remarks, available from 10 am. Fritz Zurbrügg’s remarks focus on developments in the area of financial stability, while Andréa Maechler’s remarks address the situation on the financial markets. 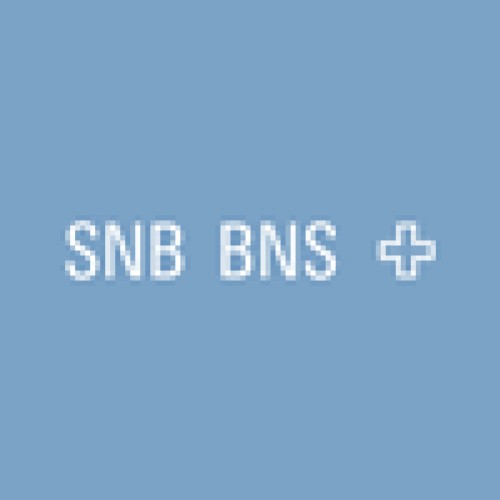